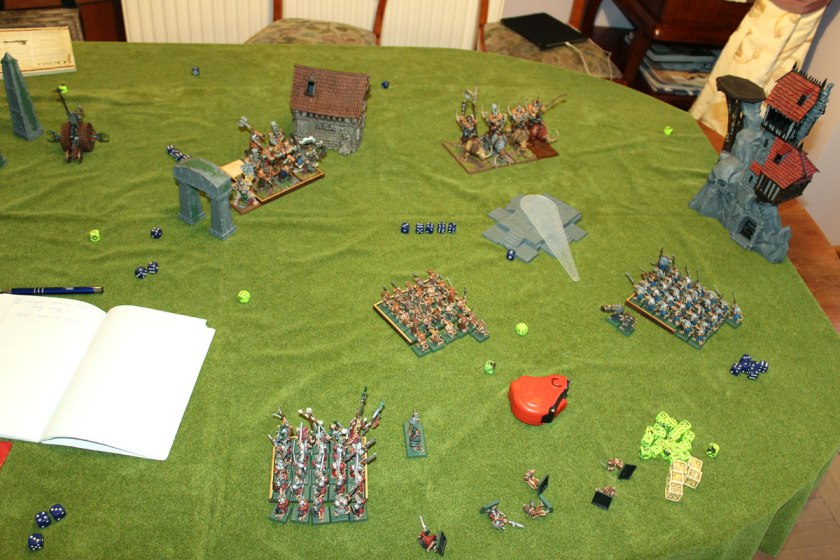 Age of Sigmar has begun finally. Some are happy, some are not – and some – like me – don’t specially care. As long as I’ll be able to play previous editions I’m OK with everything:) And, hey, maybe someday I’ll try AoS – maybe it’s fun too. Who knows? At the moment other stuff is on my mind… 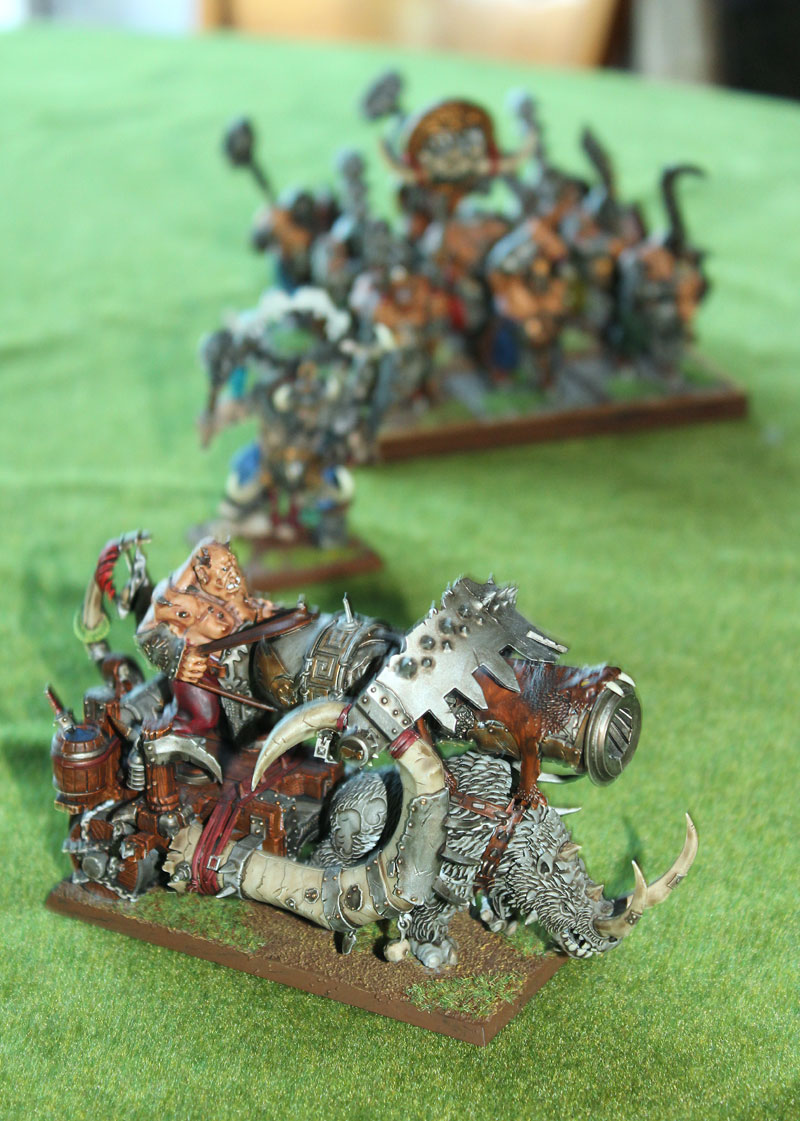 Maciek has some pretty awesome painted models. Like this Ironbalster

Well played game – had it’s twists and turns and it the result was unresolved for few turns. I had super fun evening and I hope I could repeat the battle against Ogres someday ( tough guys…really, really hard to handle with…).

Unfortunately I messed up with my camera’s settings so the photos have not satisfactory quality, but I’ve done my best Photoshop work with them to save the day. I regret that but there is no other way, and I was really feel like writing the report from this actual battle. So, any way here it is: next battle report.

As you probably remember – Grey Seer Quiksqueek has been betrayed not once but TWICE by some mysterious treacherous enemy within his own personal force. He lost two battles in the row – and with such disgrace he desired not to report in front of Lords of Decays. It will not end up well for him. Therefore he chose to do some detour before going back to Skavenblight – hunting for slaves. Council of Thirteen is always pleased when their emissaries are back with some loot. And the slaves are good loot.

Around World Edge Mountains are plenty of weak, pathetic Greenskin warbands just waiting to be taken captive to spend rest of their miserable lives in Warpstone mines. All Quiksqueek has needed to do is to grab them!

Unfortunately, some traitor (again!) made so poor reconnaissance and he haven’t informed about wandering band of Ogres. And Quiksqueek was forced to stand to the fight in order to proceed with his seek for grace.

Damn Ogres! They will feel my wrath! Kill! Kill! all Ogres!

…and Ogres acted like usual Ogres – vermin suppose to be exterminated (and maybe eaten:). The battle was on! 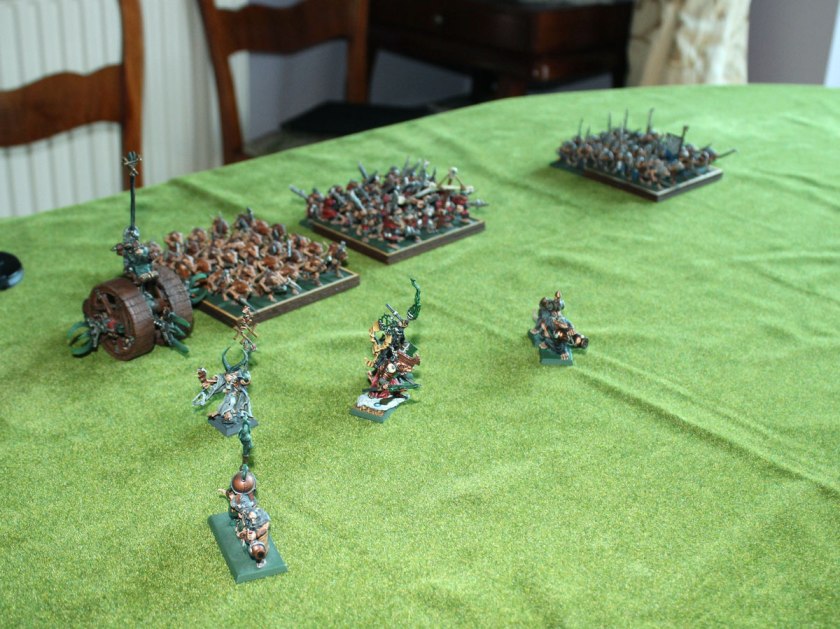 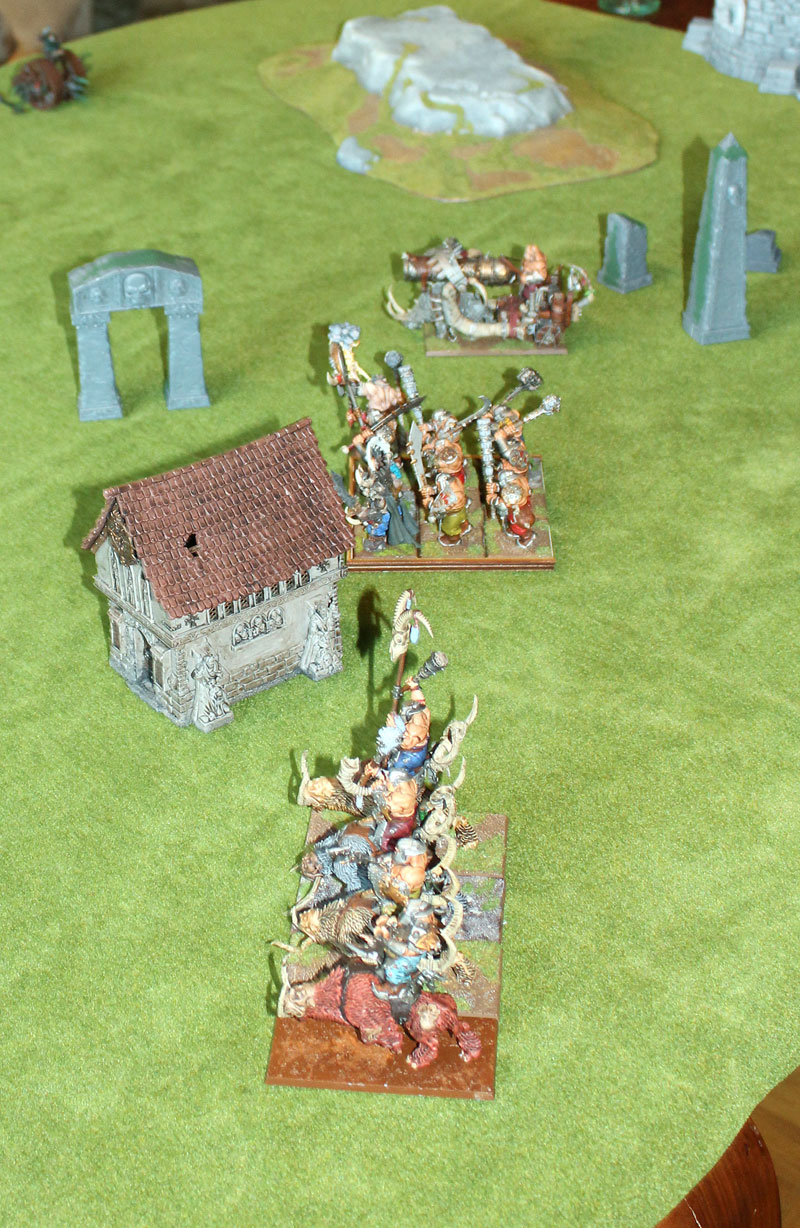 Ogres army and deployment: from the left (up on the photo): Ironblaster, Ironguts with Firebelly and Tyrant, and finally Mournfang Cavalry.

We played Meeting Engagement scenario, but no regiment were sent to reinforcements. All units started the game normally. 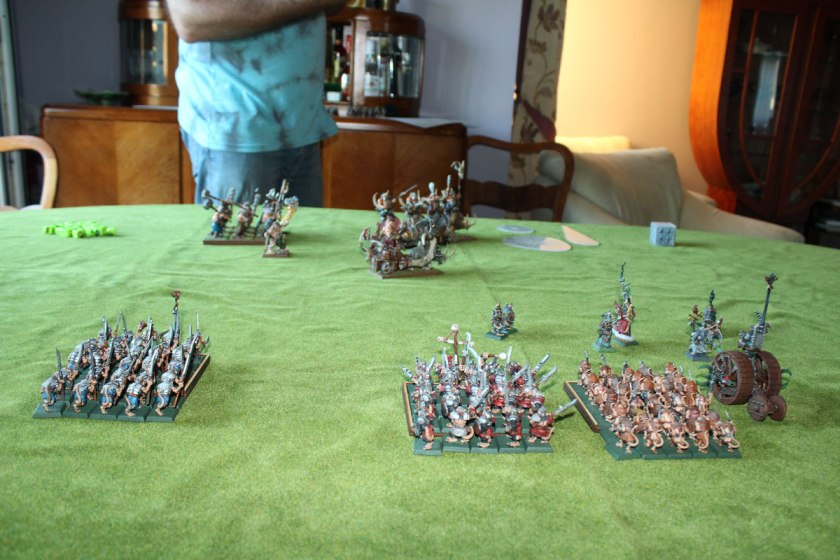 Two armies ahead : much more rats than Ogres:).

On the left flank The Doom has rolled! …or, maybe, to be exact has zzaped! Young Engineer steered his Doomwheel down the battlefield just straight ahead the Ironblaster. 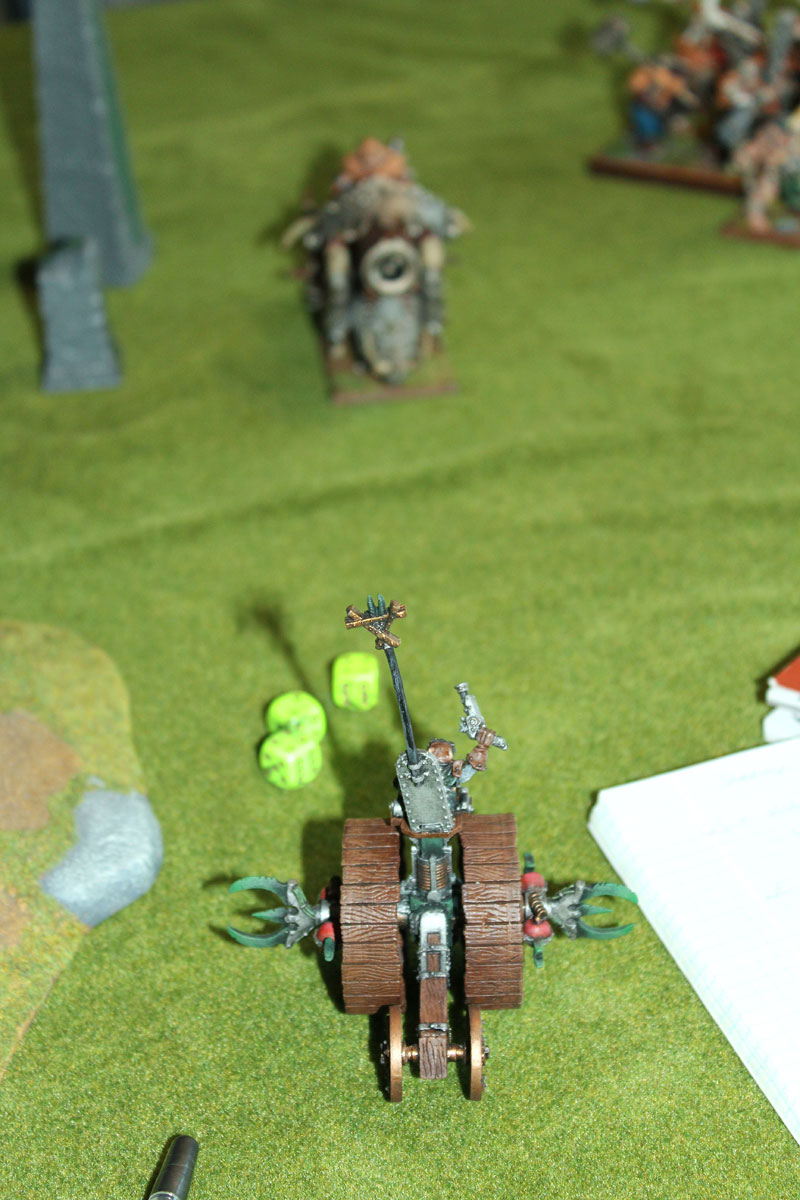 It was risky move – big gun was about to be loaded and fired any second, but let’s face it – whole Clan Skryre Skaven’s life is a risky business. You have to deal with all those electricity and explosives. Doomwheel driver has used to such matters. Just a moment before the Ironblaster fired – he released the lighting! Oh, glory to the Vermin Lord and his destructive Warp Storms! Lightning struck the canon and shattered it apart! Lord Quiksqueek noticed that from his position in the unit of Stormvermin and laughed! Finally the luck was back to him!

All remaining Skaven units held their ground. Stormvermin and Slaves in The middle and Clanrats on the right flank.  Ogres eventually will come, no need to hurry to get into close combat…

No spells casted (all possible targets out of range), and no fire thrower fired (those Ogres need to close in…).

Destruction of Ironblaster made the Tyrant even angrier than he usually is. He ordered all units to charge at the vermin! Crush them in the first moment of the battle! Badly thought and prompt decision. Ironguts failed to reach Skaven Slaves (just listen to these triumphant squeaks of those miserable rats – they cried out loud like they would won whole battle! Life after all is a sum of small happinesses:) and Mornfangs haven’t got to Clanrats. But for sure Ogres are getting closer…

Firebelly released Fire Storm upon Stormvermin unit. The power of the spell was so strong, that he couldn’t to handle all Wind of Magic came down to him and he lost all of his magical abilities. He forgotten all of his spells, and The Storm haven’t been even that destructive – winds scattered the flames more into the middle of the battlefield and struck regiment of Slaves (4 of them were killed in the flames…)

Doomwheel roll for glory has temporary stopped. Driver turned the wheel into the back of the regiment of Ironguts and released the lightnings. First killed the Ogre, but the second caused malfunction in controlling mechanism and the wheel rolled back into near ruins. Lucky for the machine – it was minor danger and harmless to the wheel. 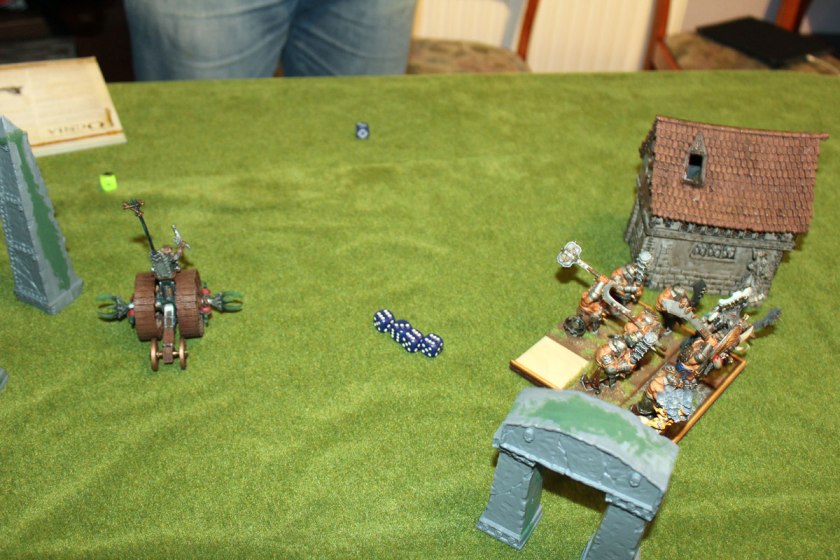 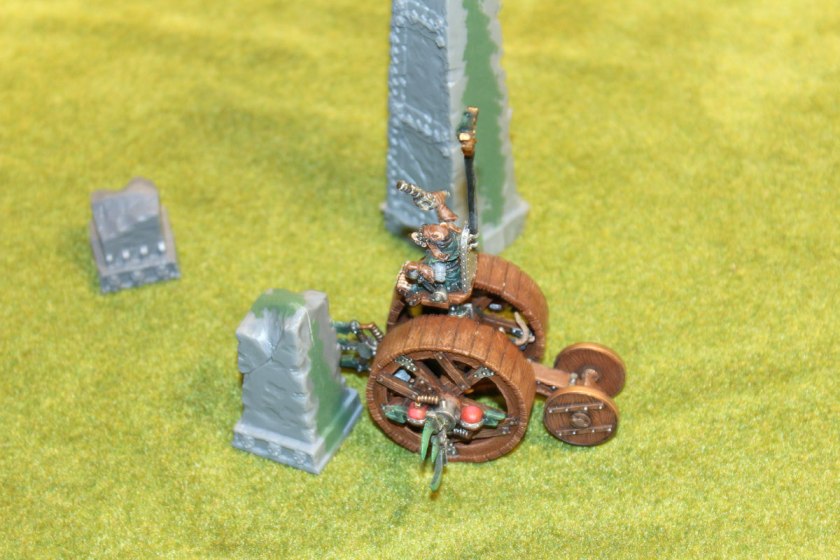 …but instead of charging them, engineer lost control over it…

All other regiments stayed and waited for incoming Ogres.  Soon… 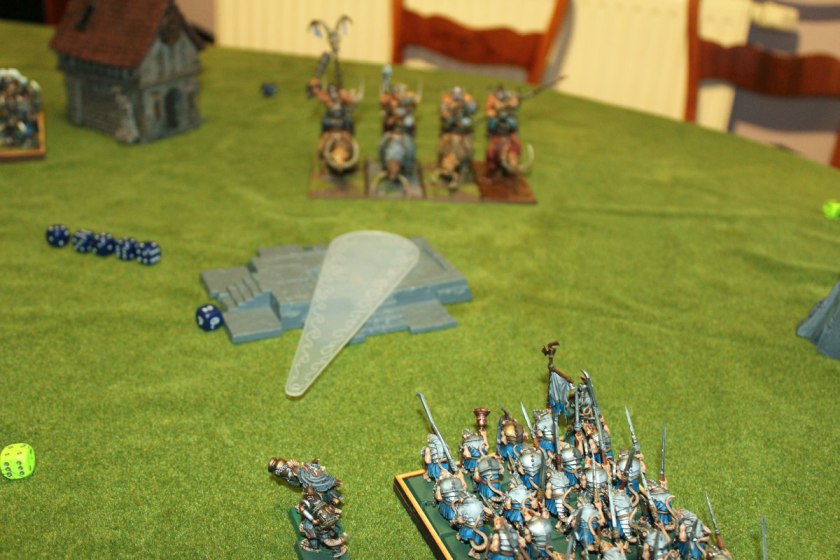 Ogres were too far for any of Warpfire Throwers…

As for magic – Ogres were still to far away… and Winds of Magic were meagre. With limited options, ZZapvolt decided to release Cracks Call straight ahead of him just in front of Mournfang Calvary, but Firebelly managed to dispel this one. And that’s it…

Ironguts shouted and ran  into swarm of Skaven Slaves. Poor Slaves had no other choice than flee. You could noticed sign of disappointment on faces of blood-hungry Ogres. Another failed charge! Still no fight! 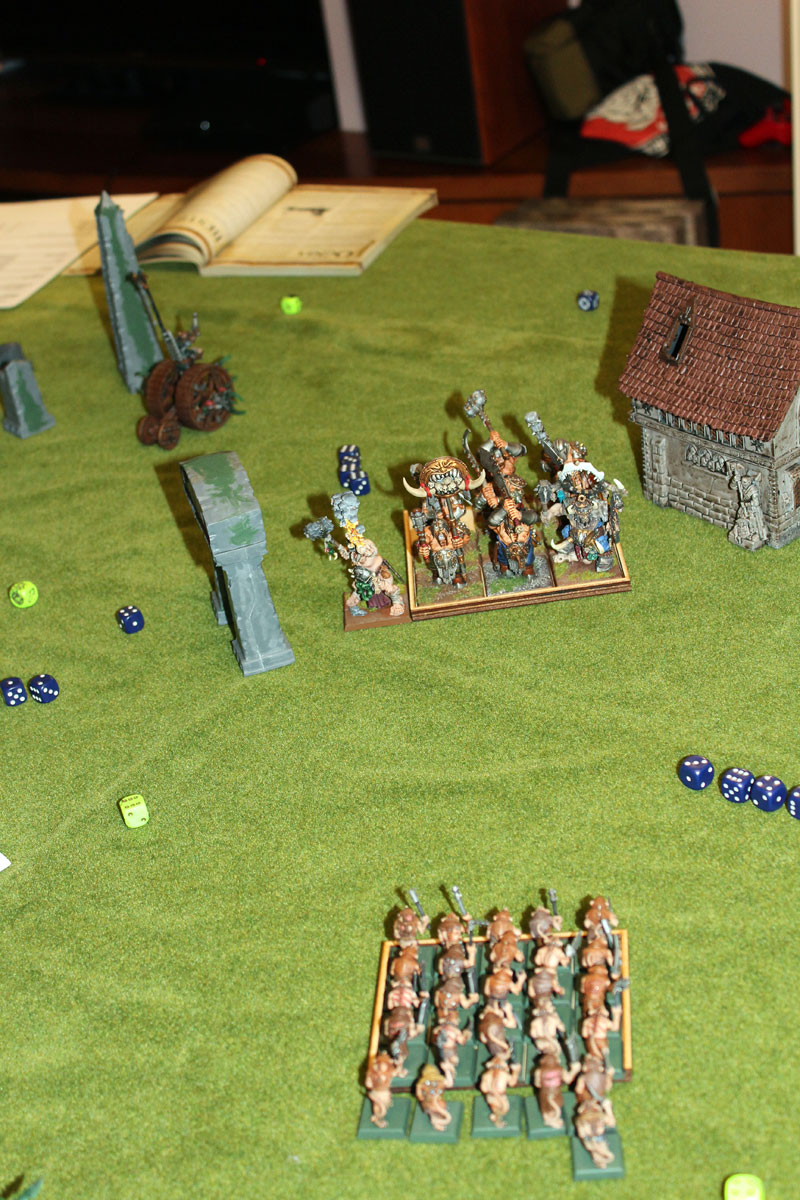 Mournfangs on the other hand charged Clanrats. Poor, poor rats! They stood not even slight chance in the hand to hand combat. 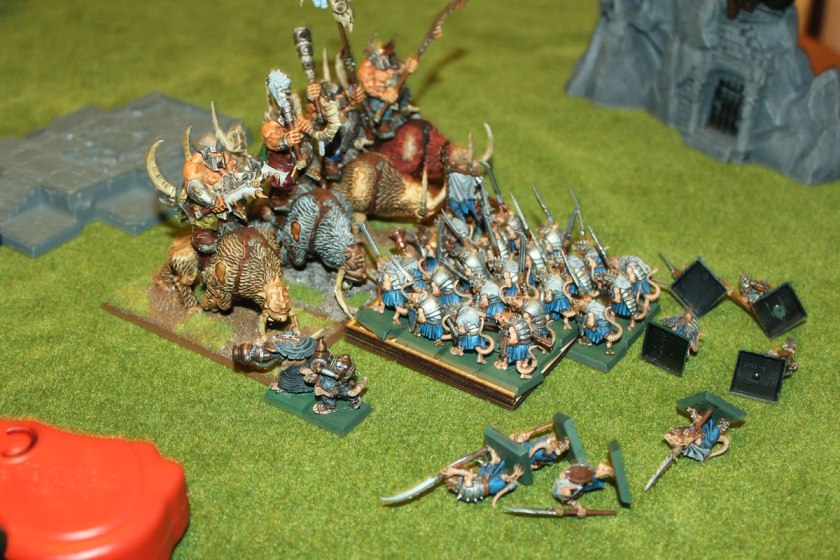 They managed to sting one Ogre (1 wound) and that was it. You can say – no damage was done here. Response of the Mournfang Riders was dreadful. Impact hits, stomping, biting and slashing! 24 Clanrats died! And remaining few fled away the battlefield. Ogres pursued and stopped right in the edge of battlefield… 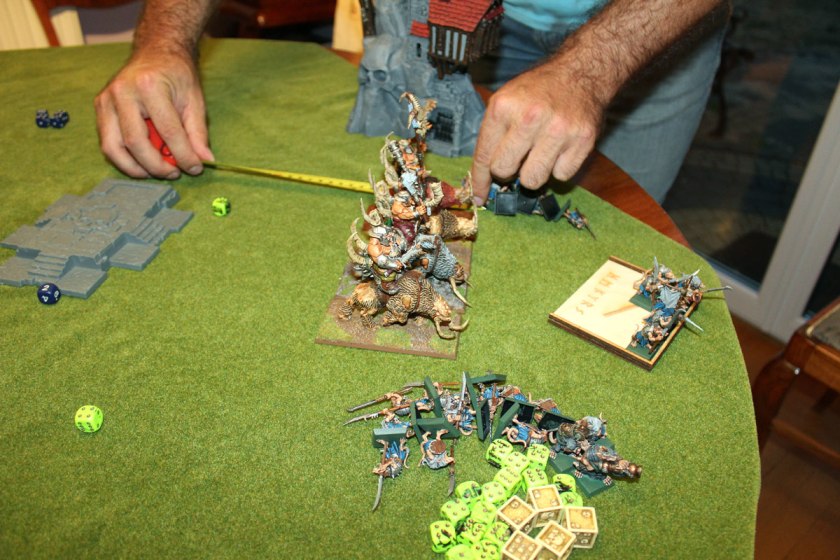 Almost all unit of Clanrats wiped out. Rest of them fled the battlefield.

Doomwhell was back on track. Turned around and rolled the direction of Ironguts unit. Meantime Skaven Slaves have rallied, and Stormvermin prepared themselves for unavoidable charge of Tyrant and his boys. Halberds were sharp, armour polished – yes, yes. Elite among Skavens were ready to fight! 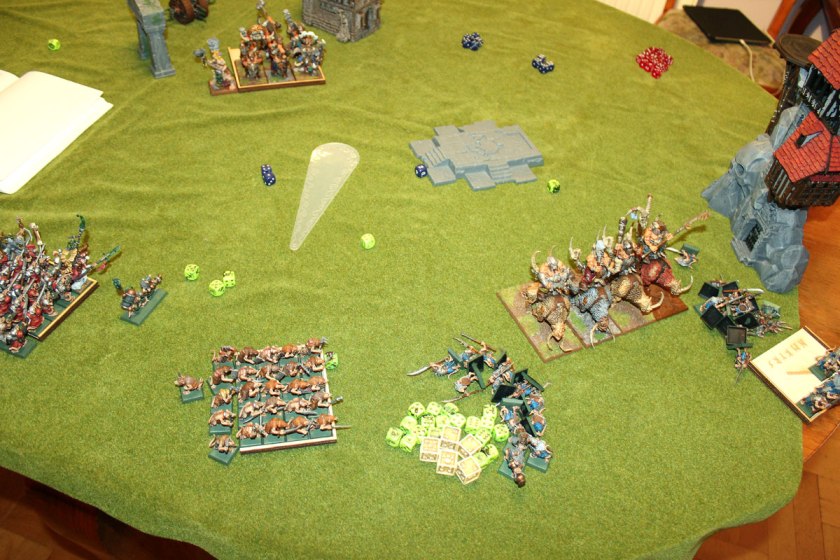 Winds of Magic again were disappointment. With not much power drained down – Quiksqueek couldn’t inflict any significant damage on any enemy units. He casted Scorch on the Ironguts – hoping they will burn and maybe they loose their nerve and panic…but no – there was no damage at all. Flames were weak and harmless (Actually I rolled four ones on the dice for wound!).

After that Doomwheel zzaped again all the lighting power into Ironguts – killing one of them.

Finally Tyrant and Ironguts have done what they were looking for some time now. They charged Stormvermin unit.  Mournfang Cavalry turned right to face the Slaves.

Since Firebelly was out of magical power, no spells were casted. And the moment The Ogre Tyrant was waiting for so long, has come – fight! He shouted for challenge – Raddish The Last – the bravest of all rats stepped forward.

(That’s was my only slight chance to do something in this combat. I’ve equipped my Battle Standard Bearer with Weeping Blades – multiple D3 wounds – hoping he could done some damages to any of ogres, but no…)

Bravery was all he could deliver. He was smashed by Tyrant’s club instantly… 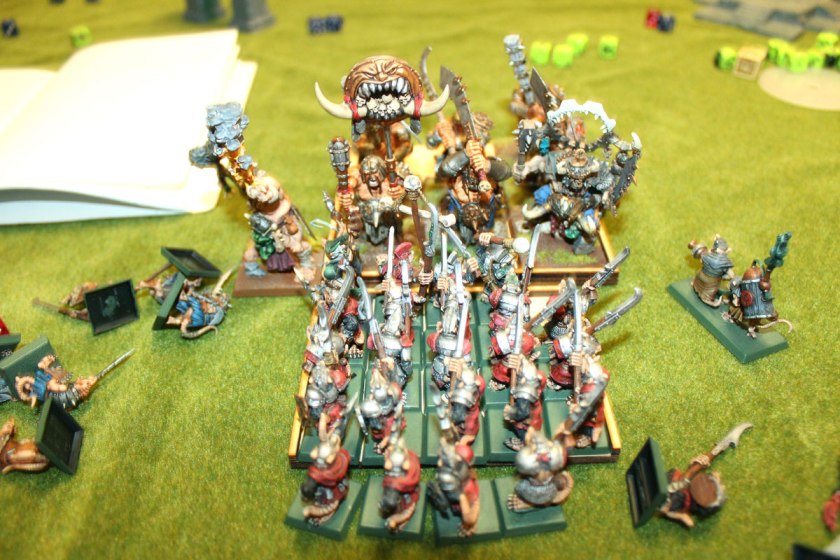 Stormvermin killed one ogre and Ogres killed back 8 Skaven. Thanks to their numbers Stormvermin stood fast and hold the ground, even though they lost combat. The next round of combat was about to be decisive.

Doomwheel to the rescue! After short momentary loss of control – it was back on track again! Closing down the ogres. Engineer released the lightning again killing one Irongut.

Grey Seer at last got some decent magical power! He casted:

Warpfire Thrower finally had some targets in range but he misfired and exploded:(. 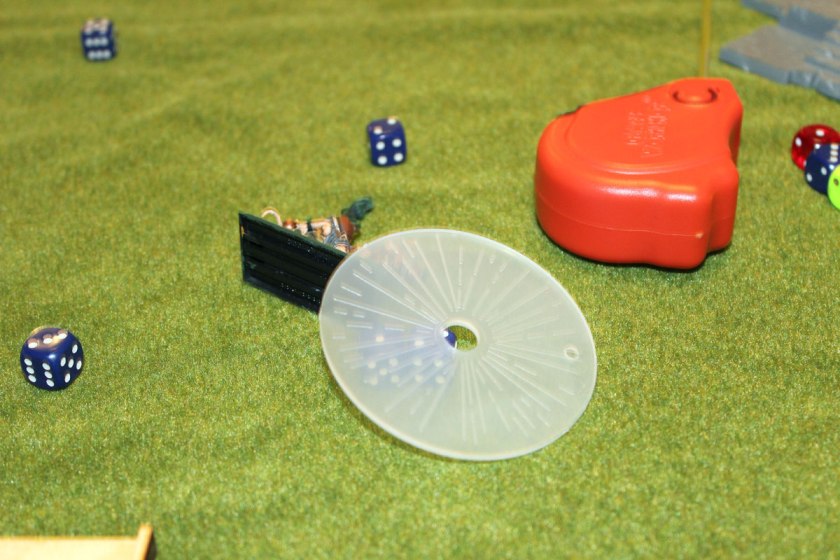 Frenzied Stormvermin almost wiped out weakened Ogres. Only one of them survived raging attacks of elite Skaven warriors, but the Tyrant were still standing – he killed 4 Stormvermin, and 3 more were burn by blazing breath of Firebelly. Horrible death. Quiksqueek stood alone. He decided to do the only reasonable thing – run away! To live and fight the other day.

At this point we decided to end the battle. My general has fled and all regiments wiped out – only Doomwheel left. Of course, I could moved it around and shoot lightings for two more turns, but it was not the point. The point was – Lord Quiksqueek failed again… The battle was lost for sure…now he need to reorganize and better he find those slaves soon, or Council of Thirteen will not be merciful on his body and soul.

My after battle notes and thoughts:

The plan for near future: I had to postpone my 5th edition Warhammer Fantasy game, but I hope I’m going to play it finally next Friday. And this weekend I’m going to learn how to play Wolsung (how awesome!). plus lots of painting and painting….