I had awesome time in Australia. During three weeks I’ve been in Brisbane, Sidney, Blue Mountains, Adelaide, Kangaroo Island and Cairns. It’s really amazing country – each place I’ve been to is different, but still has it’s awesome beauty and charm. I will be really miss it – I hope I’ll be back here any time soon.

Well, to be honest I’ve been charmed by Australia little bit too much and for far too long. I’ve been in Brisbane and Sidney for few days and I did not open even one box with my models to paint them. And I kind of forget about my ambitious plans to expand my world map of wargaming stores. And I’m thinking about stores I’ve personally visited.

So, Brisbane and Sidney – I gave up on these cities and I did not try to find any hobby place around. Like I wrote – I was engaged by other things. Mostly walking around and sightseeing… Of course, I did stumble upon official Games Workshop store in Brisbane – but these places are like McDonalds or Starbucks – they look everywhere the same. So, I did not bother even to enter;).

During my time in Blue Mountains I got a moment of inner mobilisation and I remembered what I want to achieve here, on my blog, in addition to presentation of my models and battle reports. I named my blog – Game of Travel because of this particular reason – this is the travel journal – and with my travelling lifestyle, comes this opportunity, when I can visit hobby stores and clubs everywhere I go.

So, Brisbane and Sidney – well…no reports from there. I did not go to any store. Shame on me… 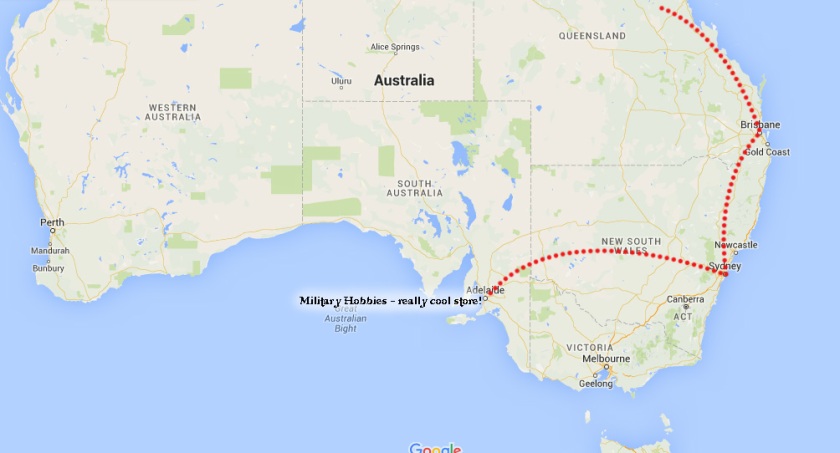 Few days in Brisbane. Hop to Sidney (and Blue Mountains area). And next stop – Adelaide – Military Hobbies Store is the place to be there!

The store is located in Hindmarch at 300 port Road. Just few minutes tramway ride from the city… or about one hour nice, enjoyable, easy stroll trough the park by the side of River Torrens (like exactly me and my wife have done:).

The store is not an ordinary hobby place. I tell you that. At first sight, after I’ve entered – I noticed – quite a large spacious place filled with plastic models, books, comic books, toys, DVDs, board games… and only handful of miniature games in the offer.

There was small Games Workshop stand, quite decent selection of Dystopian Wars, Warmachine and Hordes, Flames of War, Hail Caesar.

Of course there was plenty of hobby accessories – paints, brushes and stuff – whatever modeller or painter might need – but I had this feeling the majority of the offer are plastic model kits – planes, ranks, ships etc.

Small Games Workshop stand (and books beside it).

…but the details here, in “Military Hobbies” are the most important thing. You need to focus on them and look carefully…

There were few glass cabinets scattered around the store. And they were holding amazing selection of second hand miniatures. Mostly Citadel, but the offer is huge. There are Oldhammer stuff from 1980s/09s, and brand new boxes and blisters from latest edition. Models were usually unpainted (or the paint was stripped, but there were some nicely painted models. You could find single models along side full regiments. Warhammer FB, Warhammer 40k, Mordheim, Necromunda, Blood Bowl – all you can think of:) 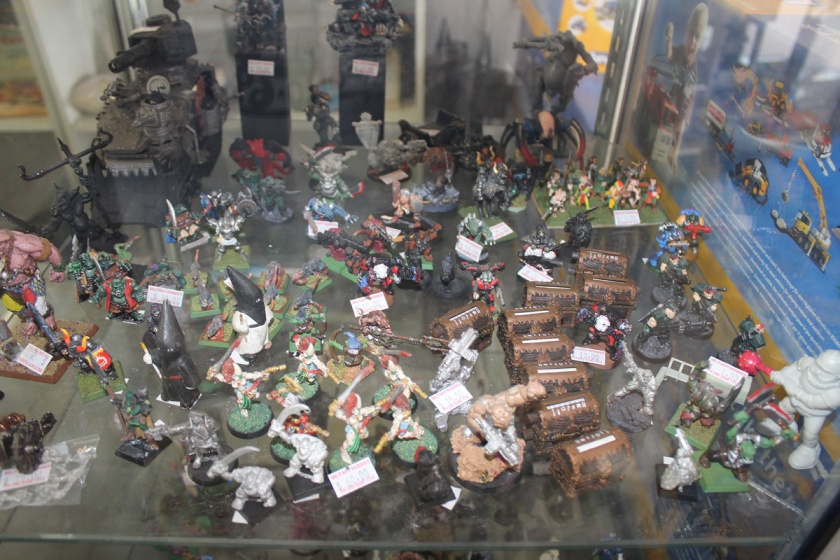 That was amazing. There are six or seven cabinets full of miniatures I would gladly purchase, and I was cruising between them for about 20 minutes, thinking what I would buy.

I could take with me only one single miniature – my backpack is already full and had some minor problem with closing it up. So, one miniature is enough. So, it was hard decision, but I made it (well, I had to:) – my choice: old, metal, unpainted Beastmen Shaman from 1993. I was collecting Beastmen for some time in 1990s, and this Shaman was one of the few models in my army, that I managed to paint. So, painting it, will be for me something like, sentimental trip. 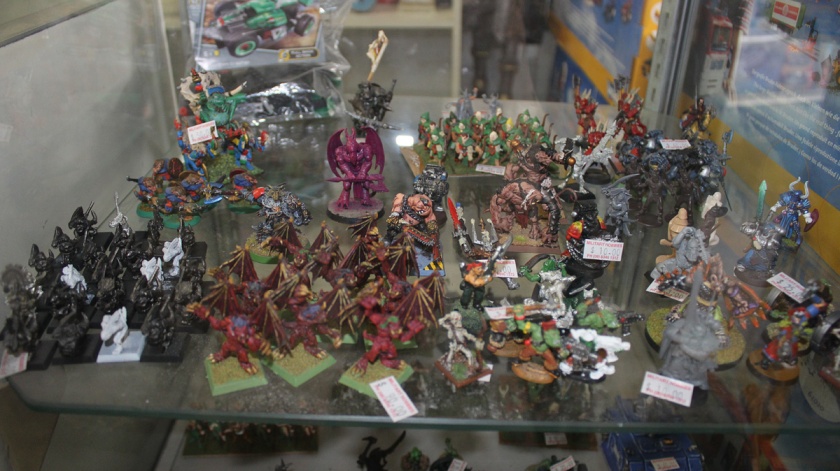 I’ve paid for it 5$. So, yes, it would be a crime not grabbing it form the store;). And few words about pricing – generally Australia is strange country. The prices for miniatures are crazy expensive here – I read somewhere – they are probably the highest in the the world. First thought – shipping costs makes the prices high. Well, not true – I spoke with few guys – they denied – the reason is unclear, but it’s not about shipping. What is most probable, is that the average income per person in Australia is also high – so big players in miniatures market (like GW) keep their prices/income ratio at the hight level to maximise profit. Is that true? I do not know that – like I wrote – this is only a guess.

Anyway… the prices for all second hand minis in Military Hobbies were various. I saw badly painted squad of Space Marines highly overpriced, and on the other hand there was unopened blister of WHFB Empire Flagellants at some decent price. And Shaman I’ve bought? Such a nice bargain:). All you need is time for yourself here, to study the price tags and grab a deal. 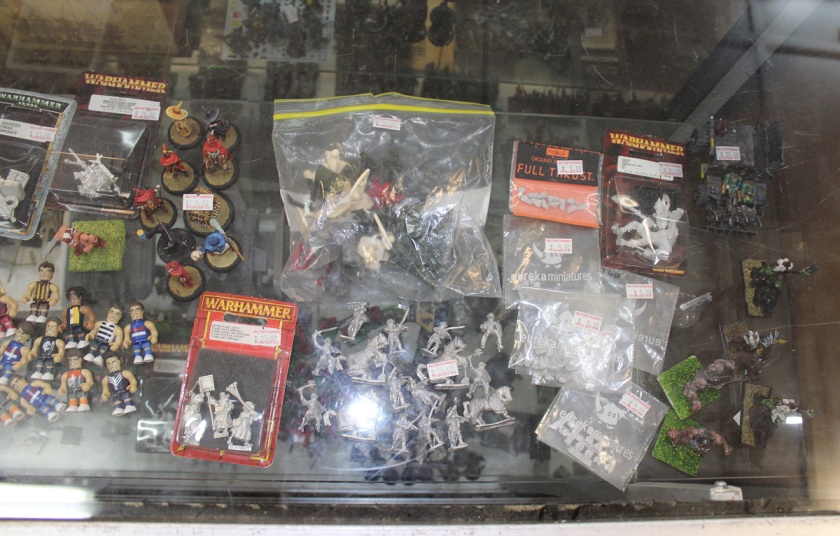 Few words about the store itself. Military Hobbies was founded in 1970s and after changing locations and ownership is finally operating at current location in Hindmarch. I wrote about my initial impression – it is come plastic model kits oriented store, than game store, but after a chat with very nice salesman behind the counter, who patiently answers all my annoying questions (thanks for that:), I was disabused. The offer for plastic kits may be wide, but there are plenty of customers for miniatures and gaming stuff. And this second hand offer attracts many people too. So, diverse offer for all hobbyists. 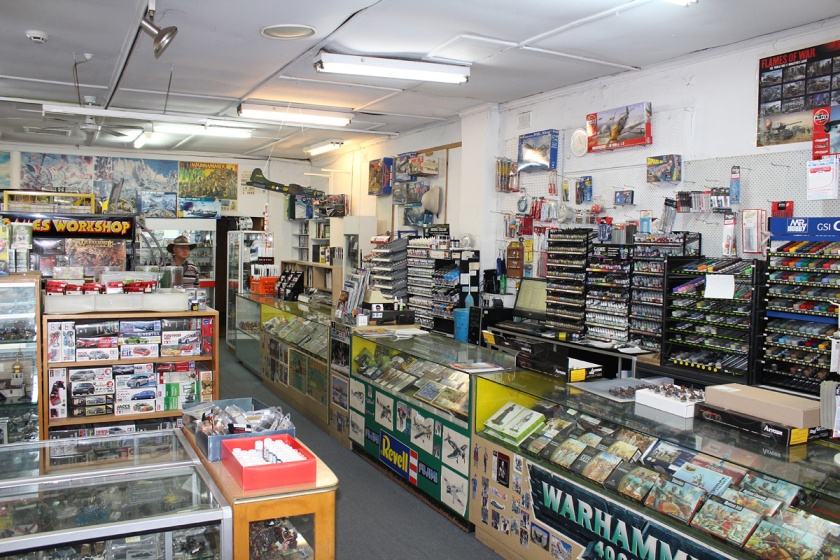 At the moment there’s no place to play miniature games in the store. There was some time, that the basement was transformed into the playing room with tables and plenty of scenery, but right now – the store has no place to play games. And as logical conclusion – they are not organizing any events, such as tournaments or store leagues.

Most popular games: Games Workshop offer obviously, than Warmachines/Hordes, and there are some guys obviously in the area who collect models only to paint hem, not to play. So Military Hobbies is just perfect for for them – the offer for different ranges of paints, brushes, modelling accessories is outstanding.

They have website – http://www.militaryhobbies.com.au. Nothing Fancy – no much info or online store, but you have al the information you need. Contact form and phone number to place orders in more old fashioned way:).

Conclusion: I was absolutely amazed by Military Hobbies store. Especially second hand offer was big deal for me, and I really regret we don’t have such stores in Warsaw area, Somewhere, you can get some nice vintage models for decent price. Just dig for some time and find the treasure – in this case some cool model.

Of course there some other shops in Adelaide area, but since I had only few days there I visited only Military Hobbies. After South Australia we headed Queensland, to Cairns, our last stop in Australia. And I’ve found some time there too to check local hobby store. As I mentioned, I’m back to business:) Report is about to come, soon.

Plans for near future: I’ll be in Bali for next two weeks. You probably think – this is life. Sun, beach, fancy drinks – at some part – it’s true:) … but most of the time I’ll be sitting in my hotel and work (I do it online) and try to earn some money to be able to travel somewhere else. And on evenings I paint… Next two weeks I plan to paint 5-6 miniatures. Maybe more – we’ll see. Beside that – few old stories are waiting to be finally written and posted. So, plenty things to do here on this small tropical island :).