I found very little time to paint during past few days. I needed to catch up with my daily work (which thankfully I can do online sitting in Thailand on tropical island:))… but it had to change finally. I need to paint – it is probably one addiction I have. No booze, no drugs, just a sweet taste of acrylic paint on the tip of my brush (yes, I admit – I’m brush licker:).

…so, after few days of break I set up my paint station in brand new place again (this time – Koh Chang) and start paint. And I needed something easy and quick to get back on track. These small steampunk dragons from Wolsung (Triad of Lotus Dragon faction) were just perfect for that.

These three Golemic Dragonlings are super cute. This kind of dangerous cute, if you know what I mean. It happens from time to time – when a hero encounters some cute creature which at some point all of the sudden is crazy killing machine. Something like rabbits from Monhty Python and The Holy Grail kind of cute:).

Spitting acid, puffing out from thin air, taking care about nothing and nobody. No one will stand a chance against them (well, not entirely true – according to character cards, they are nice addition, but there are plenty of models who are more competitive than these little buggars;).

I wonder how full grown steam dragon model looks like. I bet it is surely enormous and magnificent, and I hope Micro Art Studio will release the model eventually. It is definitely something I would want bad.

My first faction (Ash & Oak Club) for Wolsung is not completed, but I have enough heroes and henchmen to choose from. Now it’s time for second faction – Triad of Lotus Dragon. It’s great faction – mostly Orks from far east doing their monkey business in Lyonesse fighting with Ash and Oak from time to time. I’ve already acquired models to play Triad. Now, the necessary job – to paint them all. And it’s not going to happen any time soon. At the moment with me I have only these Dragonlings, plus Mr Cheng and Wandering Actor. And that’s not enough – I’ll finish The Triad when I go back to Poland (May/June 2016). Quite a some time:).

Like I said – painting these models were not a difficult task. Small models, but with not many details and they completely made of metal! Not even one piece of their skin is made from different material. So, all mini painted with metal – easy job.

I took official Micro Art Studio photo as reference. Three dragons – one iron, one golden and one brass. I used following paints to paint them. 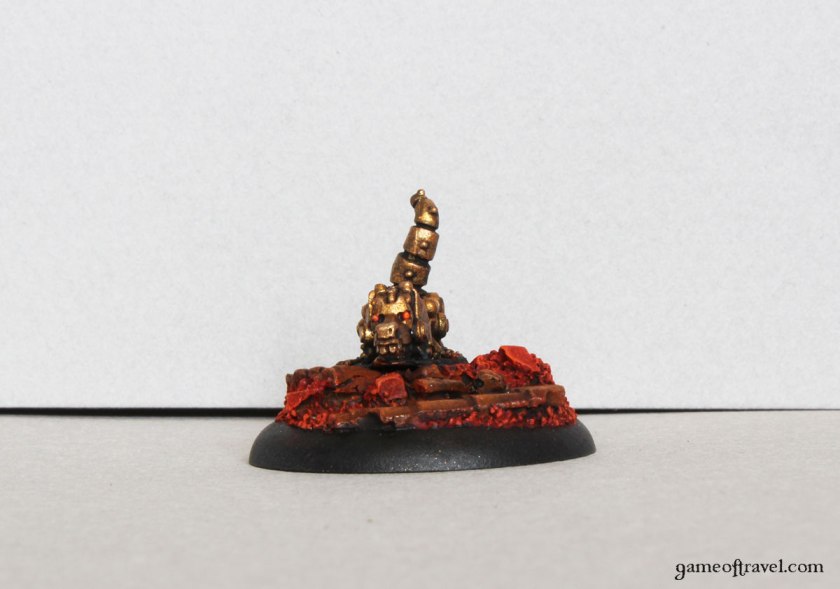 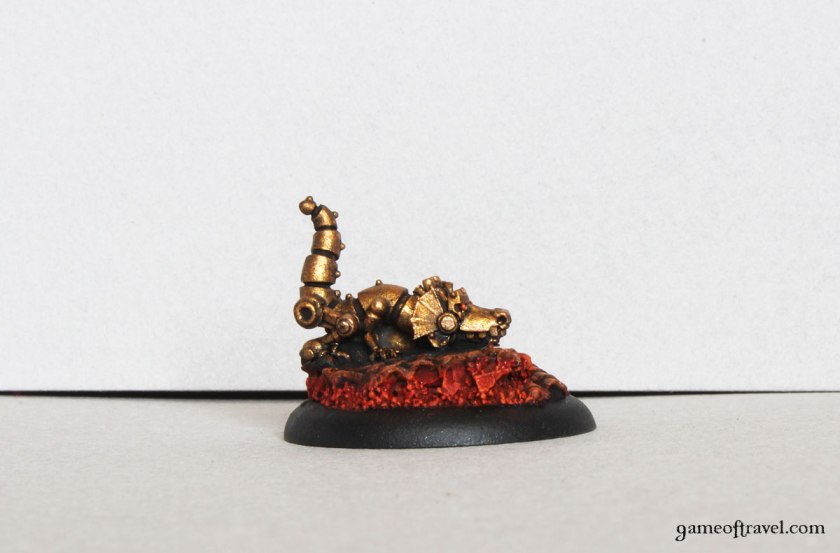 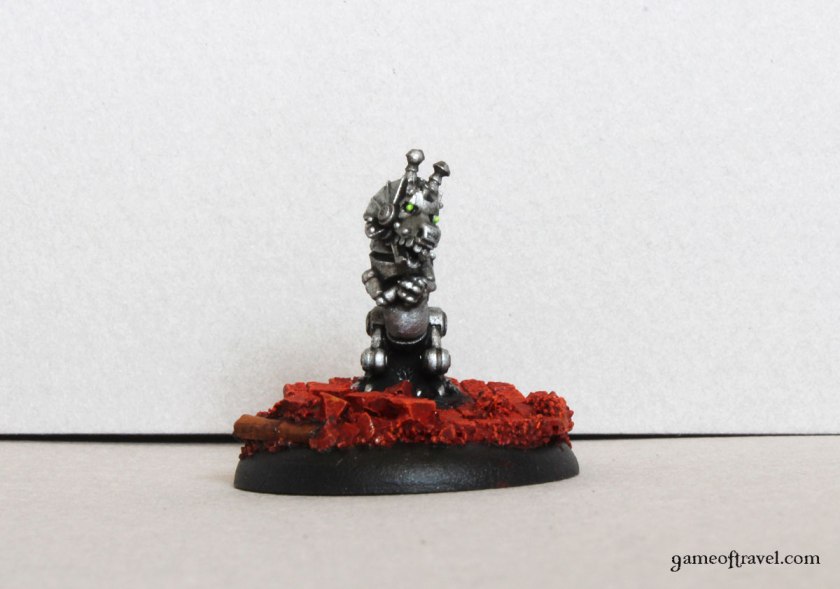 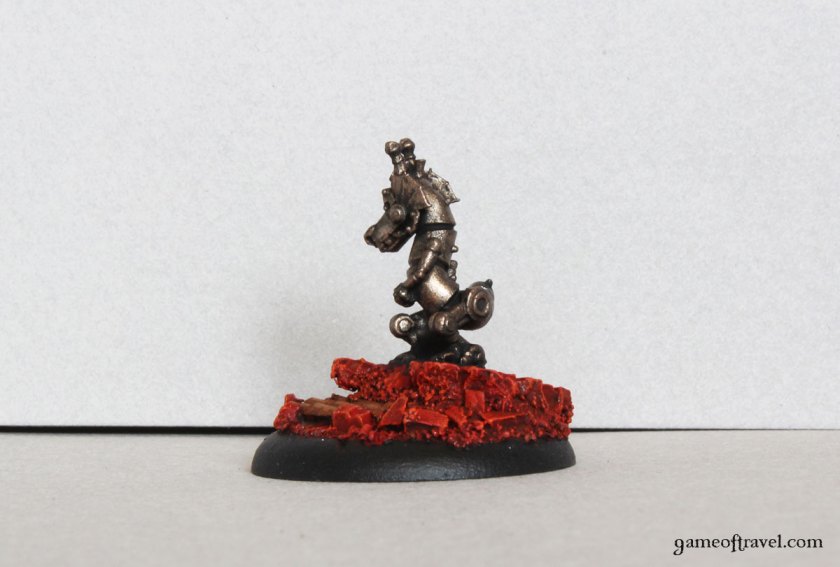 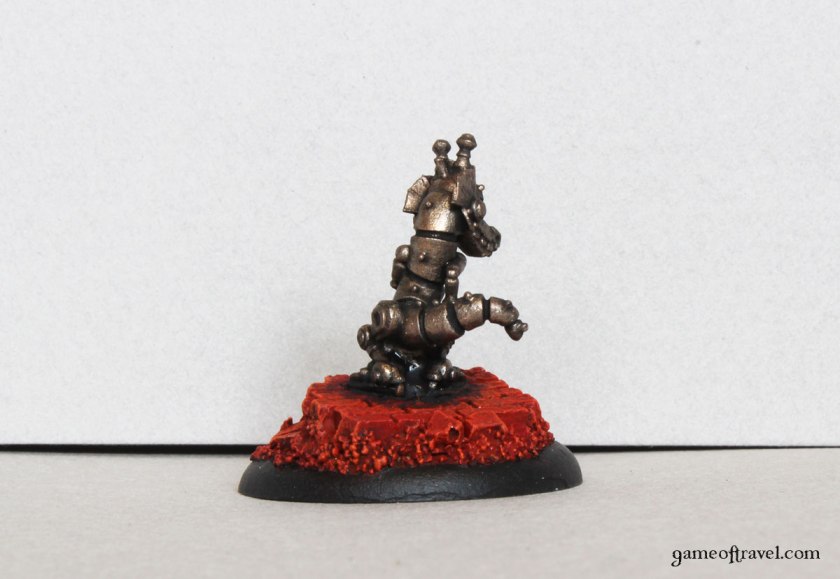 While painting these dragons, I took the opportunity and practised my painting shiny metal skills. Too often my metal looks matt. It has to shine. Wht is required is lots of patience – carefully I added layer after layer till get shining effect.

To be honest, I had more work with painting bases, then with the dragons. I used for them Old Factory resin bases (also from Micro Art Studio) – mostly brick and some shattered roof tiles. I think they look cool with the dragons (and in the future I plan to base all my Triad faction in the same manner).

All three Golemic Dragonlings came in one blister and they are available to buy in official Micro Art Studio online store.

Plans for future: For next 1o days I’ll stay Koh Chang, and I’ll try to paint as many minis as possible here. Starting from 25th December until 5th January 2016, I’ll travelling a lot. Bangkok, Jakarta, Kuala Lumpur – three cities in 12 days. Crazy… but on the plus side – I’ve already contacted three stores in these areas – super exited about the possibility of playing the game there. Warhammer 40k, Infinity, Malifaux…? I do not know – we will see…

…beside that – in next post – Battle Report from my battle in Singapore.  Blood Angels vs Raven Guard.