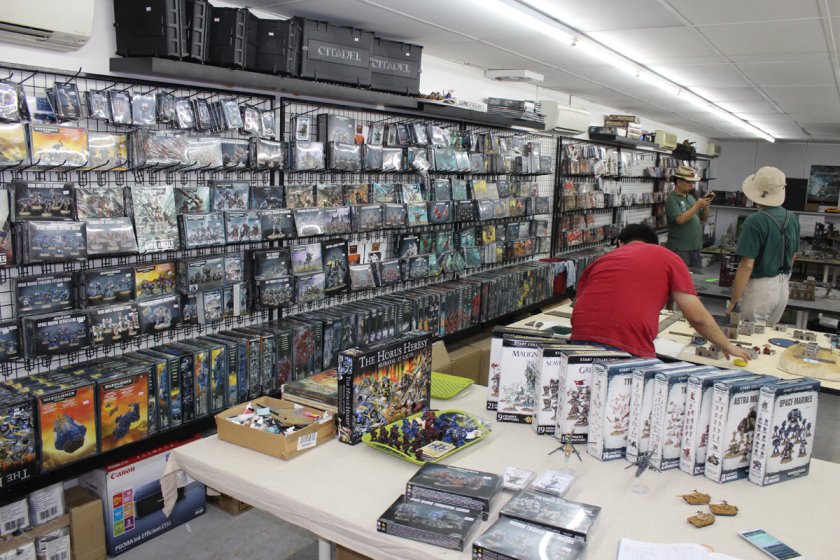 It has been some time since I posted any travel related article here. It’s my last day here in Thailand, after glorious two weeks in Koh Lanta. I still have some stories to tell from Malaysia and now I want (and need!) catch up with all overdue posts.

After Indonesia, I’ve stopped for few days in Kuala Lumpur. I’ve met my good old friends. I’ve drunk my beloved teh tarik and ate tons of tanroori chicken with naan (de-li-cious!) …and I also have taken the trip to Petaling Jaya District to vist Wira Games and Hobbies Store.

Petaling Jaya district is easy to get. An it’s not far away from KL Sentral train station. It’s  about 20 minutes by commuter train. So, the trip from my hotel should be around 30-40 minutes. Should…because thanks to very friendly and helpful taxi driver I was there in 10 minutes for about 20 RM (about 5USD :). Since, the store was open from 12 PM, and I was little bit earlier – I drank one more teh tarik in some nearby restoran, before I’ve entered Wira Store. Yummy:)

First word of explanation – Wira in Malay means: hero. And logo of the store speaks for its name too.

The store itself is spatial. Very spatial. I mean there is plenty of place for stock and tables to play (there are 4-5 tables available – if I remember correctly). There’s the plenty of space to play, and still you can’t complain about inventory. Boxes and blisters are properly stocked in sufficient quantity 🙂 There’s also a place for small painting corner, where everybody can bring their minis, paints and brushes, and just sit and paint. Sharing stories, tips with other fellow painters.

Space Marines ready to be painted. 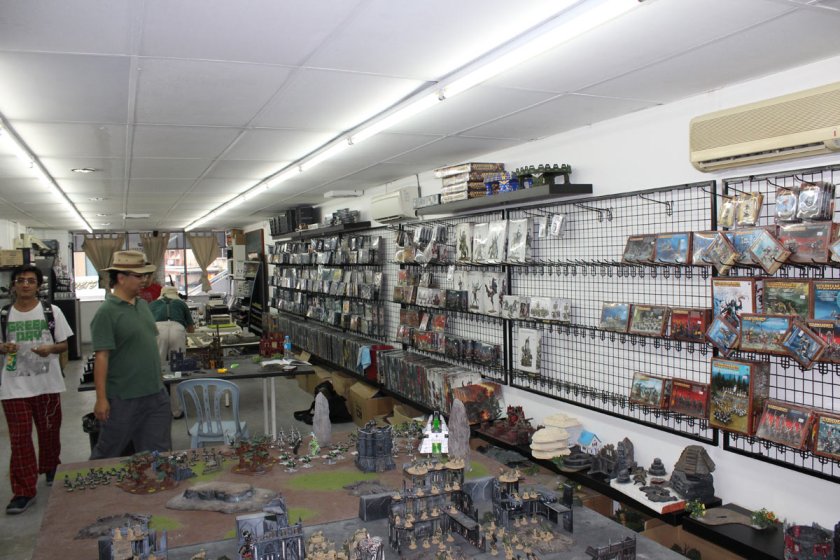 Really, the place is the most spatial store from all I’ve been in Asia and Australia. And what’s most important – it’s dedicated fully to miniatures games. No board, collectible cards nor RPG games. Only miniatures, miniature games, paints and accessories. That’s what I like about this place the most! 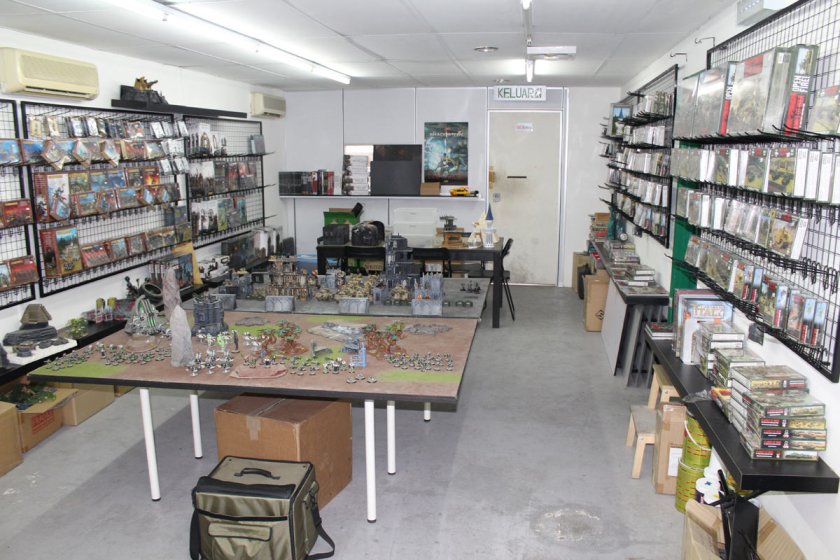 All available space, miniatures (and miniatures only!), tables to play with lots of scenery pieces to choose from make Wira Games & Hobbies the best place around to play. Of course, there are few stores offering miniatures in KL area, however Wira G&H is only one with such noticeable dedication to gamers. Offering, beside the product, the place for hobbyists – where they can play, paint or simply hang around. 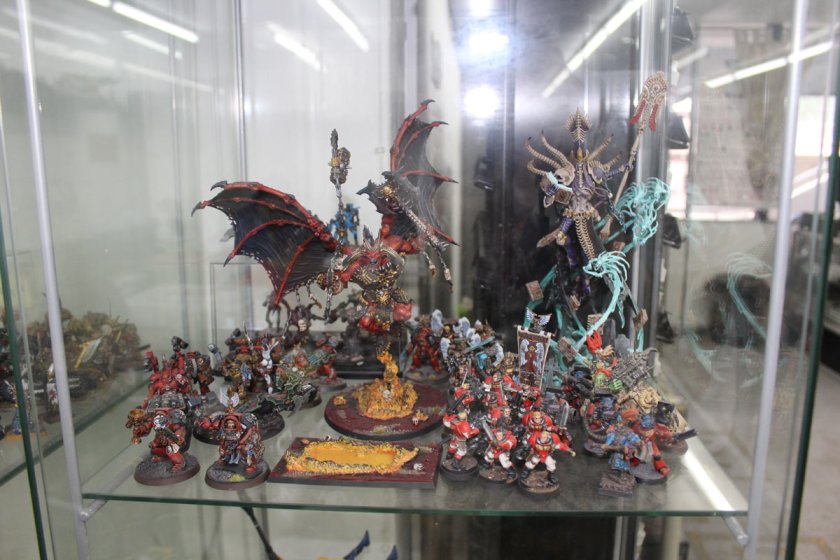 As for the offer. Mostly Games Workshop. Warhammer: Age of Sigmar and 40k. The second games system offered in Wira is Flames of War. I was told – limitation to GW products is dictated by simple business model – supply/demand. Popularity of Warhammer all over the world makes it natural game to sell. Demand for it is just better than for other games. And it’s just too risky to enter other games. And why Flames of War? Simple answer. It’s just because the miniatures for FoW are manufactured in Malaysia:) Easy to order. Easy to get. And to sell and buy:)

Actually, Warhammer is getting more and more popular in Kuala Lumpur these days. Growing community of players enforced Games Workshop to open their own store here (in about few months). Wira Games & Hobbies will have competition. However, Mr. Chang, the owner said to me – he’s not afraid official store. His prices are competitive, another store will bring more gamers to the hobby, and Wira is also the community centre where lots of things happen.

First is called Wira Cup and is for experienced power gamers. Just make the most cheesy, sneakiest and the best army list your codex can handle and try to win Wira Cup. Sounds simple, he? 🙂 But it’s not – competition is fierce and numerous. And everybody want to win first price. Sometimes it’s few models, voucher or discount. Definitely, something worth to fight for.

Second tournament series is called Foundation. It’s for beginner gamers who are new to Warhammer, learning to play and do not have enough experience to start in Wira Cup. The event suppose to encourage newcomers and provide fun first of all.  Winning the Foundation tournament is secondary objective.

It happens from time to time, that some power gamers participate in Foundation Tournament (well, I think the will of winning at all cost is strong in some gamers’ hearts:). Well, in general, Chang tries to prevent that. Foundation Tournament is organised to learn lads how to play, not to win it no matter what. But even Chang doesn’t know every Warhammer player in Kuala Lumpur. Sometimes power gamers enter Foundation Tournament, and they have time of their lifetime. They win so easily. Way too easily. They are like wolves among sheep. Or like seal hunters among baby seals. And they are easy to spot. When they beat all newcomers just like that – they are busted! Sure, they will grab first price, but also they will get another trophy…more disgraceful… called Baby Seal Club. If you enter to the pack of Baby Seals and bring slaughter, you need a club. So, let’s say – the trophy will remind you – do not do that! Do not enter Foundation, do not kill poor, still learning baby seals. Just stop.

And now few words about Chang himself. The owner of the store. Absolutely brilliant person. We were talking for about 40 minutes. Well, mainly he was talking. I was just asking questions and he explained me everything about his idea of the store, business model he want to implement or how to develop hobbing community in the KL area and attract more people.

He has enthusiasm, I can give you that and he’s spreading this all around. Chang is one of these guys truly devoted to the games he’s playing – both miniatures and his small business. The community needs more people like Chang. Great guy:).

…and I had the pleasure to play the battle with him. I’ve arranged everything little bit earlier – everything has been confirmed: Day of my arrival and what I’ll bring with me (Blood Angels!). We’ve decided to play small. More skirmish style battle – each side 500 points (because of that I’ve decided not to write the usual battle report. The game was too direct. Just bunch of Space Marines trying to kill each other in quick manner. No turns, no twists. Just few dead Astartes;). Thanks a lot for this game. It was fun:)

Deathblue Spidergobble was lurking trough the warp in those places of universe where the aether was leaking to the reality is substantial quantity. He was looking for weak minds. Corrupting those minds, giving them false sense of perception – that was his favourite game. That was the favourite game of his master – Tzeentch, Changer of The Ways, blessed be.

Planet KL1313 was one of those places, where warp creatures were close to mortal universe. It was fate, or just simple unfortunate coincidence that patrols of  two Space Marines Chapters were in the area. Ultramarines and Blood Angles. Deathblue Spidergobble influenced both leaders minds in such wicked, evil way, that they couldn’t see clearly any more. They did not see brothers in arms. They saw enemies of The Imperium, filthy heretics. Tzeentch filled their souls with insanity – they felt uncontrollable urge to eliminate heresy, and in fact they were fighting – brother against brother. 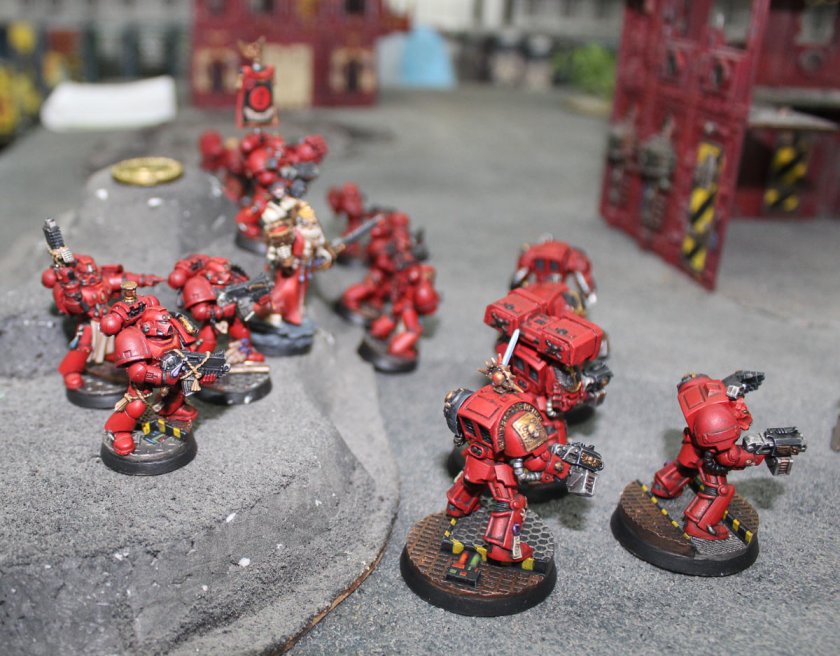 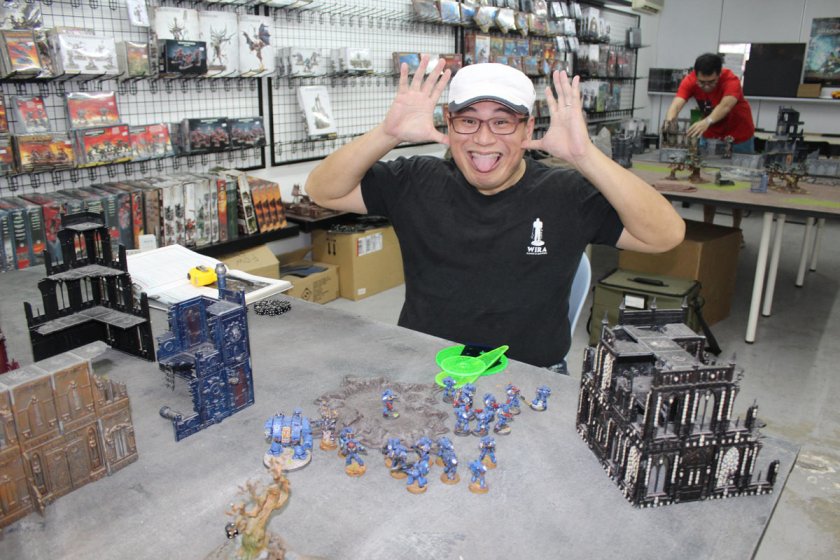 Fight was fierce and quick. Terminators took out Dreadnought in close combat (Power Fists are incredible mighty weapons against walkers).

Ultramarines Dreadnought was attacking from the left flank…

…but he was surrounded by Terminators and destroyed.

Chang, Ultramarines General, noticed the battle is not going well for him.

Later Gamaliel was in front of the charge of his bodyguard tactical Squad at Librarian Cethegus’s Tactical. The fought bravely – many proud Astrates died that day. And eventually, whole Ultamarines squad was annihilated and Brother Cethegus was killed by Borther Gamaliel. 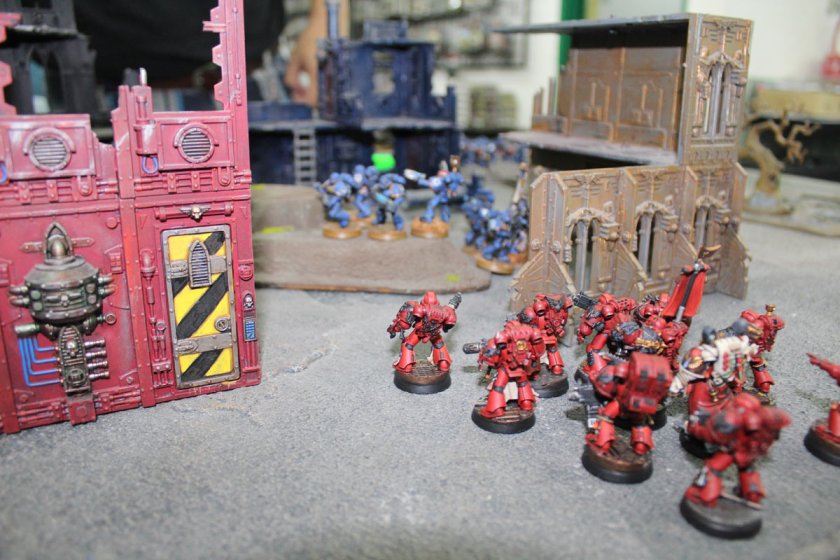 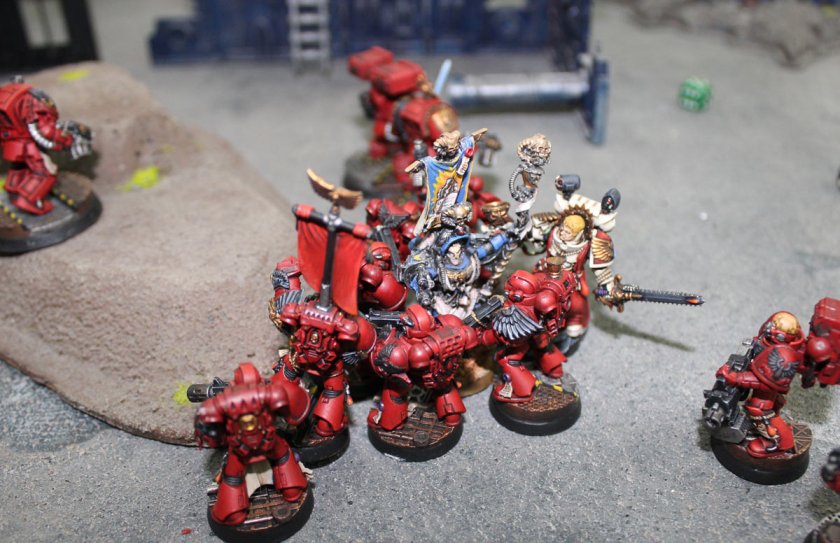 The wiped out whole Tactical squad and surrounded Cethegus, the Librarian.

That was sad, grim day for The Imperium. When Gamaliel got back to his senses and realised his mistake, it was too late. He looked an his sword covered in blood and looked at the body of Cethegus. He started to cry… 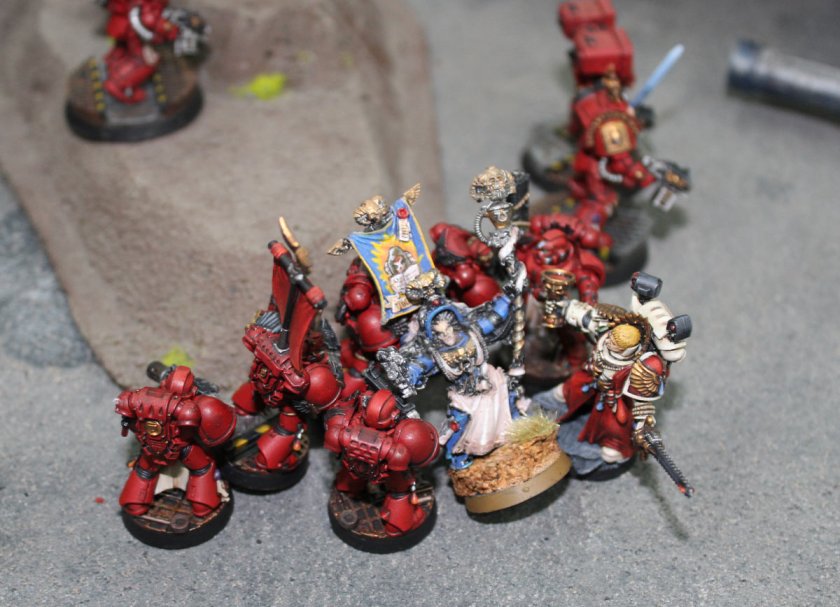 …and at the same time, Deathblue Spidergobble, Greater Daemon of Tzeentch, laughed out loud and his laugh echoed over the battlefield.

The battle was over.

Really short but enjoyable battle, And look at that! I’ve won:)

Chang, once again thank you for chat, battle and everything. When I come back ( and I will), we will do re-match:).

Me and (sad) Chang after the battle.

Summarising: The store is awesome. probably the best I’ve had the pleasure to visit in my South East Asian journey. I recommend it to all gamers that plan to go to Kuala Lumpur. To play or simply restock:).

Plans for the future: this is my last day in Thailand. In few hours I’ll be back in Kuala Lumpur, but this is only one of stopovers. My final destination is Panglao Island, Philippines. There, I plan to relax, wander around, snorkel, see Tarsiers and of course… to paint:)).