This one is special.

Miniatures Sell/buy/swap Facebook group few weeks ago has organised painting competition and I’ve decided to participate. This is no ‘big deal’ competition, so it was clearly for me I can join in and have fun with no reason to worry if I have any chance to win it or not.

The thing is I have no idea, who is in, skills of the participants or for instance that the whole competition is open – no limits, no categories. Imagination is the limit:). And this is cool, actually. No pressure for me, and since I wanted to paint Skink Shaman anyway, I could submit him.

There are around 70-80 participants, so my chances to win one of the prices (gift vouchers for bitz and models) are not so big. However, one thing is certain – this competition has given me the certain boost. I have put more than usual effort to finish the mini. I have given it something extra. At least I’ve tried:).

Skink Shaman is amazing model. It came from the releases that give you fully prepared base along with miniature. This is really cool idea, I regret GW  is not continue this policy, but on the other hand with simple flat base – I can customize it in whatever way I want. However, Shaman’s base is awesome – the floor covered with skulls (most probably they were sacrifices. Bloody sacrifices:) and Shaman is standing on the stone stairs. In very dynamic pose. 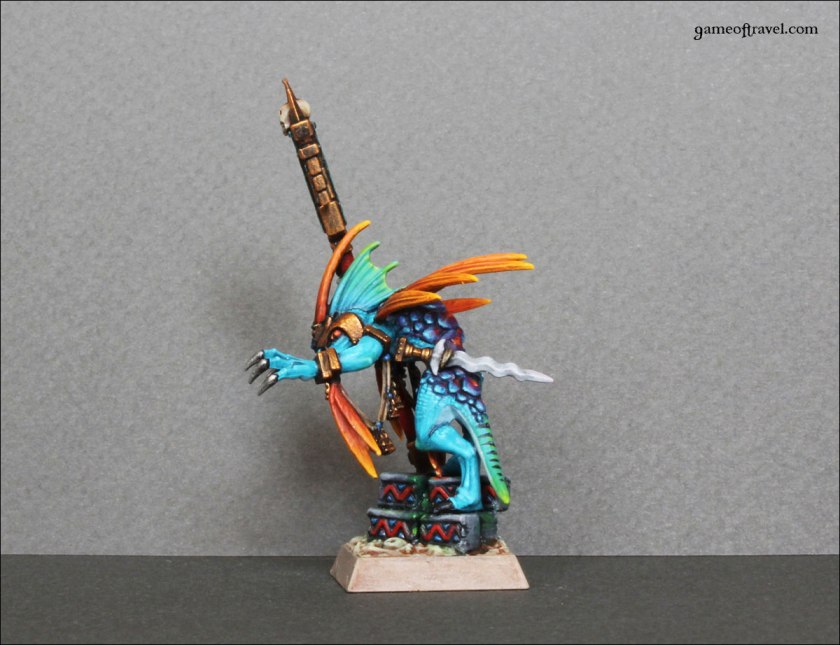 …and Shaman himself? Great model. This is one of this models that makes you want to have entire army of his reptile brothers. Well, I have known that already – when I was grabbing really cheap bargain of Lizardmen army, but it’s peaking to another level, when I was painting Gor-Rok few weeks ago, and now when I could do this little Skink.

What I love so far about Lizardmen – they give me amazing opportunity to spread the wings and use deep depths of my imagination. Colourful skin, shiny scales, wicked reptilian eyes, and lots of jewels, beads and gold. Plus the shaman have long, fancy feathers.

The skin. As base colour – Temple Guard Blue (TGB). Instead of wash it with pure Drankenhof Nightshade (DN), I made a mix of DN (20-30%) and water. This way, I made the mixture which will nicely cover all blue areas of Shaman’s body and made all transitions between colours and layers look more smoothly. Underbelly is mix of white and TGB, also covered with DN/water mix and later highlighted with almost white. To the tip of the tail and back fin – I made transition from TGB to Moot Green. I wanted the skin would not be one colour only. Reptiles are not like that – their skin are wide selection of colours with dots stripes etc. Mine Skink has few stripes also – on the tail:).

The scales. I wanted Shaman back scales to look extraordinary. I was thinking – Shaman is VIP Skink – and he looks like a boss – top notch. His scales need to eye-catching and breathtaking. So, I used several different paints to made made the effect that in my opinion will be desirable. As base – Xereus Purple (XP) gently blending into TGB. All highlighted with TGB mix with white. On the top back scales I added few red spots to give them more colour diversity. I used Mephiston Red (highlights – Evil Sunz Scarlet and Wild Rider Red)

The Staff. Most tricky part of the staff is the top stone plate. Base – Caliban Green (CG). Firts I added few gentle layers of mix of CG, white and water to make the surface look shiny. Next, I put the layer of mix of water and CG (90/10), and after that smooth edges of white mixed with Warboss Green.

Base. Nothing fancy this time – original GW base is sufficient here. I tried to make the stone stairs to look as natural as possible. I applied several layers of different mix of Administratum Grey, Mechanicus Standard Grey, Abaddon Black, Nuln Oil, Agrax Earthshade. Between the rocks I put Caliban Green, Warboss Green and Moot Green with little bit of Biel-Tan Green to represent moss.

Deadline for the competition is this Friday. Today I’ve sent my photo and wait for results. No pressure though – maybe I win, or most probably not. The point is I had my those of fun, while I painted this little guy. In Poland, in my mother’s attic, I have hidden some bigger lizzys – Carnosaur and Bestiladon, plus dozens of Skinks, Sauruses, Kroxigors and more. This will be my next big Warhammer thing – I can already see these bright, intense colours on the tabletop. Super nice!

What’s next. Two weeks and few days to go. I paint quite a lot, so I have few miniatures ready and just waiting for me to make them some good quality photos. I will eventually do it and I will flood the blog with my recent projects. Plus… I paint almost all the time (oh, how I wish it were true:) and I’ll have some more.  So, during my last weeks in Asia, I’ll be crazy busy, and that seems fine, cause there will be some commotion in the very first days in Poland. No time for hobby I presume. But for now – let’s paint!