…but let me explain. Few months ago I grabbed awesome bargain for some miniatures for Warhammer Empire. It’s was basicly a steal, so I couldn’t resist. I purchased then: 2 Plastic Wizards, Unit of Empire Knights and Warrior Priest. That was 100% impulse purchase. No time to think – the deal was so cheap, I had to act quick. So, I did…

…and what next? Should I expand this basics to the level that I’ll have actual army? Or just paint this few minis for fun and leave them as they are. Or, on the other hand, I could sell these minis after I paint them on Ebay. So, Empire or not to Empire?

To be honest, I’m not sure if I’m able to collect one more army. I’m already overworked with painting minis. Yeah, this is not a big problem, cause I like to paint. The thing is, my collection grows in little bit dangerous pace. All of the sudden, I have too many unpainted miniatures and if I don’t resist temptation to start another army, the possibility may occur that I’ll need a lifetime to paint my entire collection. And I prefer to not to:). I already owe Skaven. I started Lizardmen recently, and also have great urge for Chaos Dwarfs. So, let’s count 3 armies for Warhammer Fantasy Battle. Blood Angels and Slaanesh Army for Warhammer 40k. Beside that – Nomads for Infinity, Ash Oak and Triad for Wolsung, and Neverborn for Malifaux. And also thinking about one of Warhammer 30k legions. Damn, that’s many games. Way too many…

…but on the other thing, Empire has such amazing miniatures. And when I think about those old metal from 1990s! Oh, there were the times! Pure temptation!

My recent model – metal Warrior Priest model, and no matter what I’ll decide to do with him later, I had really great time while painting this guy. That was great variation from anything I painted recently. And it was first Empire miniature I had on my workstation since eternity. I was collecting Empire in early 2000s and if I’m not mistaken, it has been over 10 years.

At this point, I grabbed the opportunity of painting the bald dude and tried to paint stubble and shaved head. Usually I paint normal human face without any facial hair, but when I was visualising how Warrior Priest should look, I saw tired guy during long campaign, who hasn’t had the time to shave for many days. I was little bit nervous – it was first time after all, but it happened to go very smoothly:

First, I painted the face, with all shades and highlights. Then I added “shaved area” which was Administratum Grey mixed with Kislev Flesh (plus water). Then, I applied watered down layer of this mix at the place where I felt the priest did not shave for some time. Highlights – the same mixture plus some white. I’m quite content with the result and I plan to paint stubble on other minis.

Other thing – letters on scroll. This model and his scrolls and purity seals were perfect opportunity to practice my lettering. First I drew some gothic letters on the piece of paper several times, and when I started to feel confident I tried to paint the letters on the scroll. What do you think? Do they look ok? Next part of this practice – full words, and small symbols or illustrations. Ultimate goal – top notch free hand (someday:). 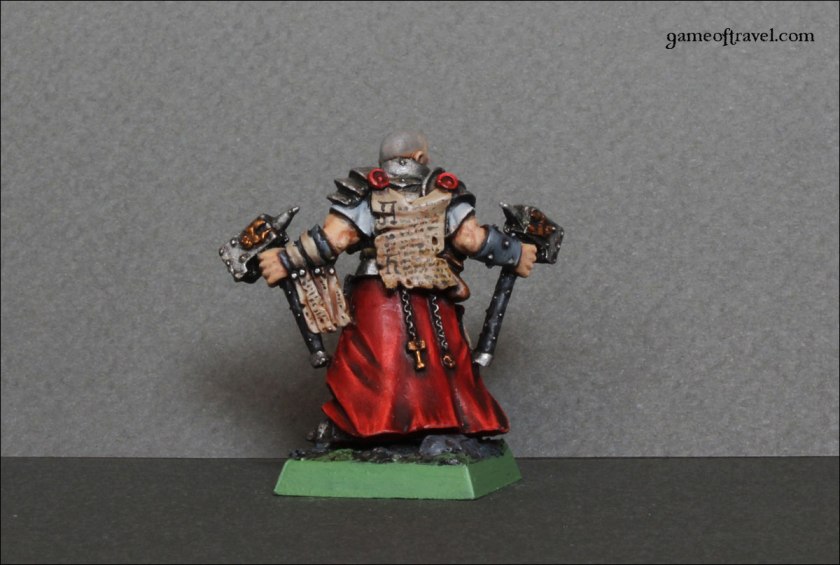 Base is from Pk-Pro offer. Nice, simple, resin and cheap bases. Perfect for Empire miniatures.

So, I have first Empire mini. Now I need to decide what to do with this Warrior Priest next? Sell it or keep it… Thankfully, I do not have to decide right away. I think about it some other time.

What’s next. That is last post I have written in Thailand. Tomorrow I ride to Bangkok and Tuesday in the morning I fly to Warsaw (with stopover in Poland). Probably I’ll have to take a little break from the blog. I need to rent a flat, connect internet, and of course bring my collection from my mother’s house attic. I assume the break will last no more than a week hopefully and once the dust settles  – I’m back to blogging.