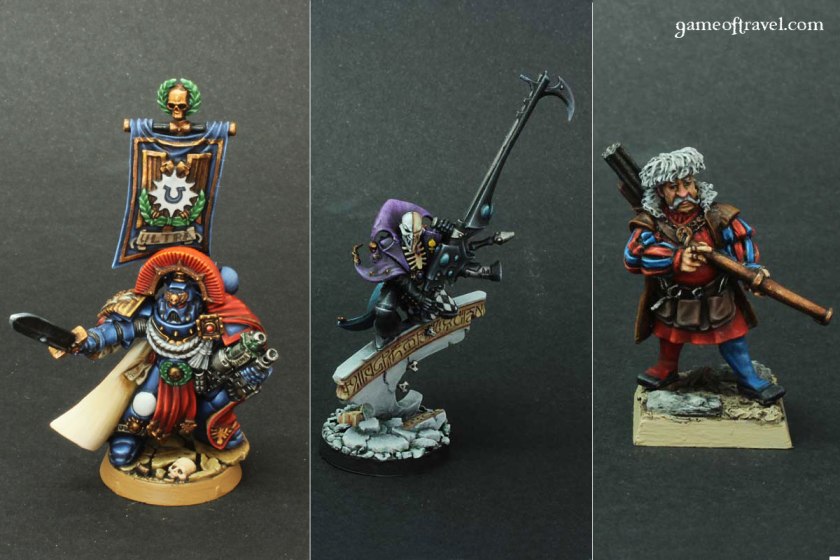 For the last week (more like two weeks I think) I was painting like crazy. I was painting  during every spare moment I had. Waking up early in the morning, going to sleep late night. Well, from time to time I catch this painting fever and I can’t stop.

…and to be honest, I feel good with that. Almost no time for any other leisure activities, just regular work, family life and paint, paint, paint… That’s life, I tell you that. If I could repeat that cycle all over again for longer period of time, I’d not complain at all. Painting with small dose of gaming activity took over my life by storm. And I’m glad – after one year of intensive work on wide and various ranges of miniatures, I can easily say – I can’t imagine any miniature, I wouldn’t like to paint. There are always some small things in every model I see I would like to work on. And I don’t think there’s something that would discourage me to do so.

Right. I’d like to show you work of may last two weeks. So, there will be some changes on my blog. Compeering to previous entries, when I was showing my latest minis in separate posts, from now on, I’m going to collect few miniatures together and show pics of them in one story. This will save me some time on writing and have some more on painting or creating more interesting posts, like battle reports (which is quite time consuming:).

So without further ad0… my latest models. 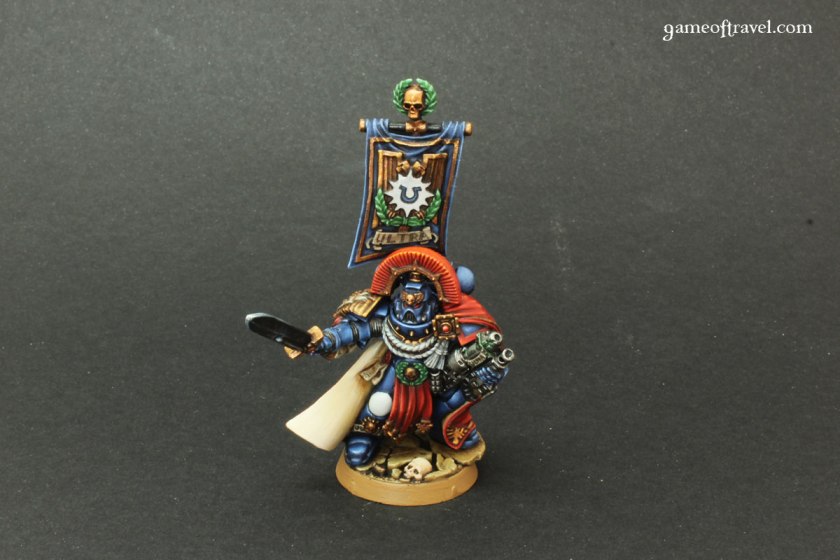 At first I was planning to convert this model into Blood Angles captain to lead my forces at Fading Suns of Corinth narrative campaign I play with my friends in the moment. Eventually, Captain Sendini of Blood Angels wears Terminator Armour and is represented by completely different model, and this Son of Ultramar remained as Games Workshop delivered him in blister. In blue. 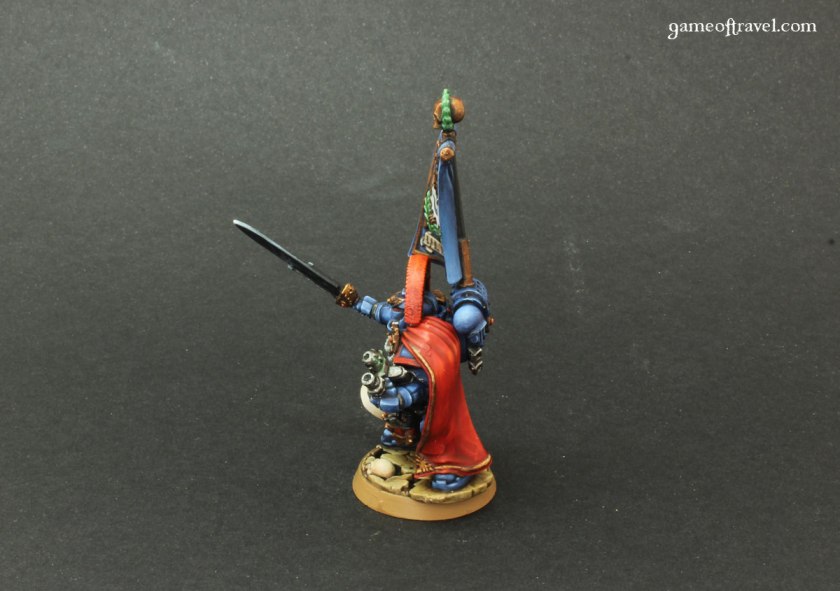 For me it was perfect opportunity to practice highlighting of blue Power Armour. Base, obviously Maccrage Blue, and blending into lighter tones of Altdorf Guard Blue and Calgar Blue. Highlights and edges are made with Calgar Blue mixed with white in different proportions. 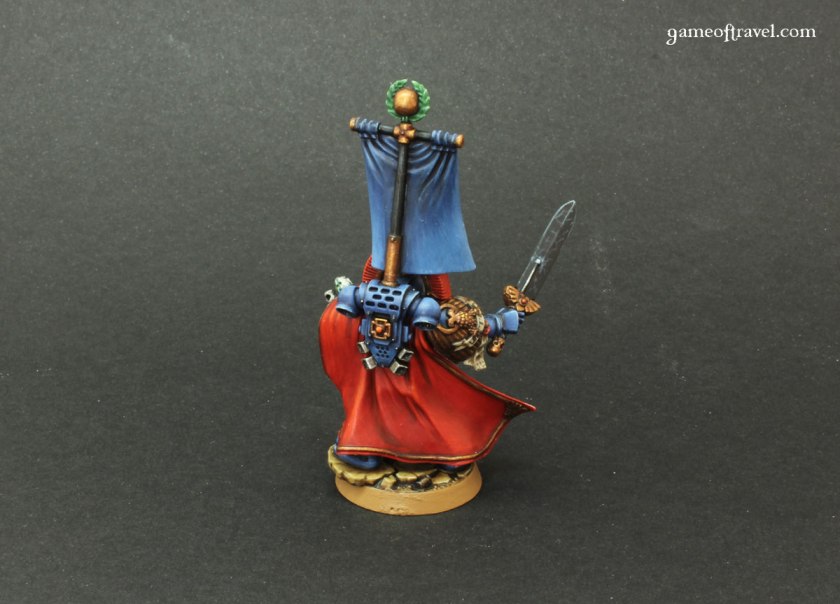 I also put some effort into writings on scrolls on banner, shoulder pad and leg of The Captain. I believe after some time I could make it right and my lettering will be flawless. For now it is like it is:).

The same with Omega symbol on the banner. Well, if I paint enough symbols like that my free hand skills will only get better. No doubt about that:). 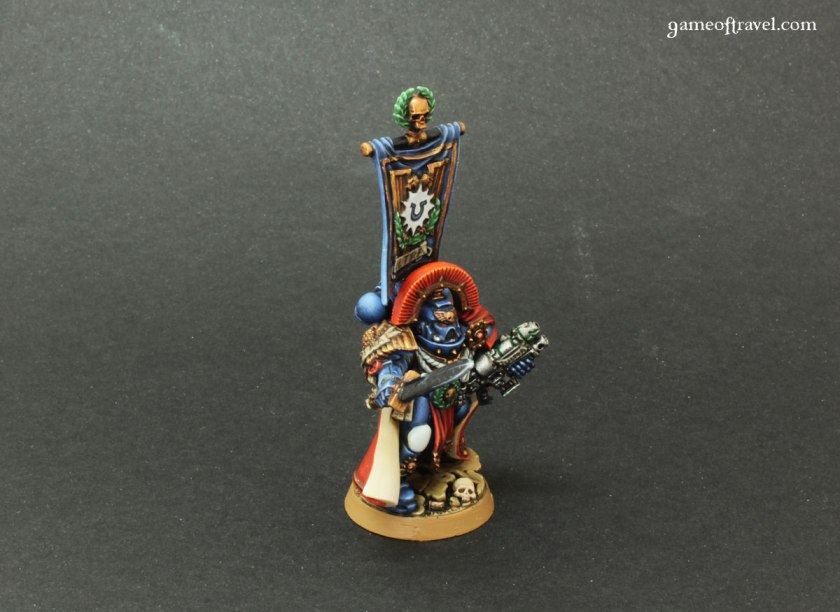 It was true pleasure for me to paint this model. That was something different than only red, red, red Blood Angels:). And it was refreshing as well – now I feel this urge to paint other chapters. Already Dark Angel and Space Wolf stand in line, waiting to be painted. You may argue, but personally I think Adeptus Astartes are the best models ever created and I love working on them.

This guy is going straight for my Ebay. Check it out. Maybe you will like it:) 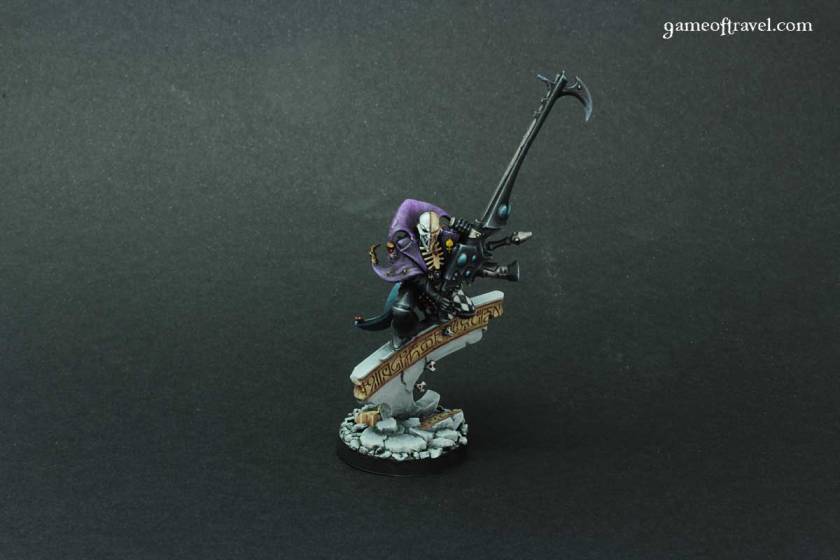 If Ultramarines Captain was differ my everyday Blood Angels only by colour, then this fellow was entirely different story. Never painted Harlequins before and for me, it was quite a challenge. 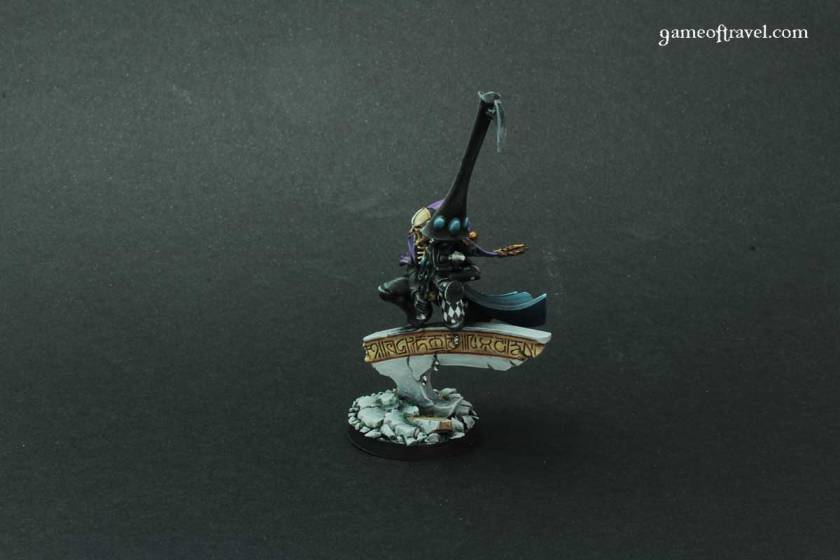 First of all, diamonds on the leg. I was struggle to make it look natural and even. Correcting the shapes and lines few times, adding different shades of light grey and white. Highlights on the top, more shades in the recesses. Time consuming, but when it was finally finished – I felt proud. And all of the sudden I wish to collect whole army of those diamond freak. Painting diamonds patterns for life! 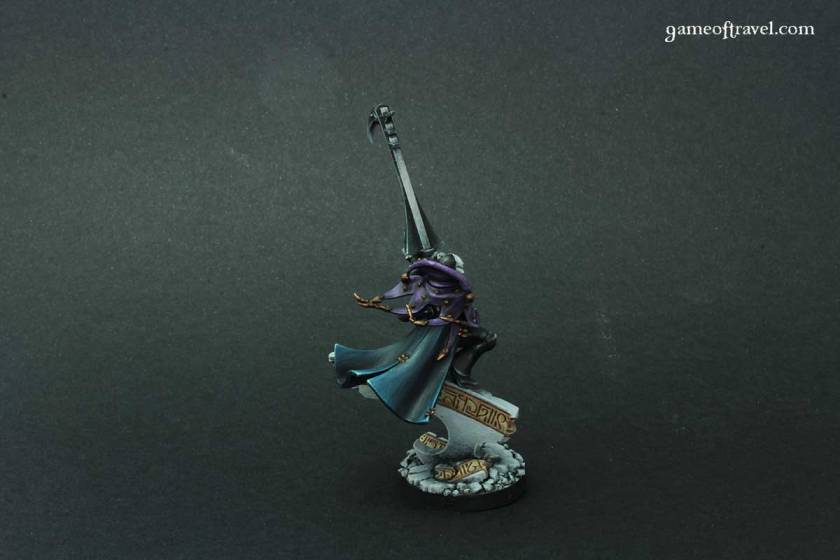 To be blunt, I hope that wish never come true. Too many projects running at the moment, and these diamonds could ruin my entire calendar. So let’s leave Death Jester as it is, and do not buy him any comrades:). 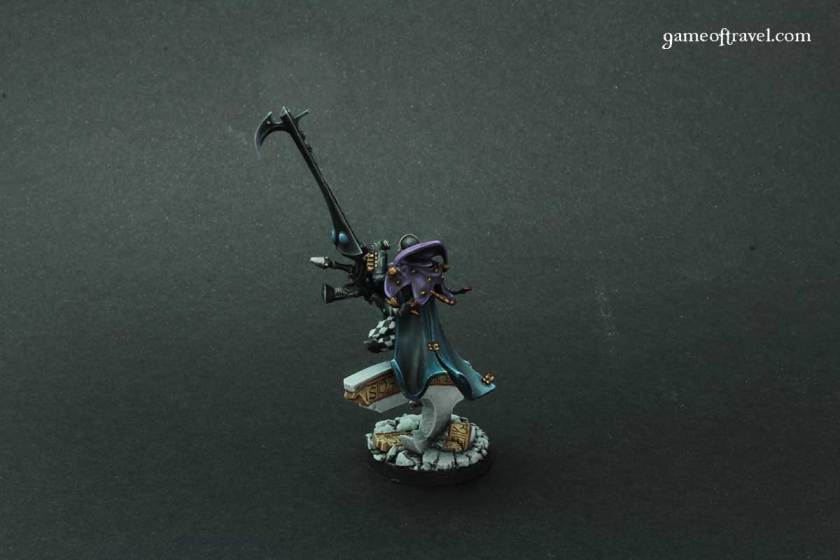 Another thing – good practice of shading black clothes and coat. As base was Abaddon Black. On pants, shoes and gun I use different shades of grey to light the exposed area. On the gun an the top of the knee, highlights are made with almost white paint, to make it look more shiny. 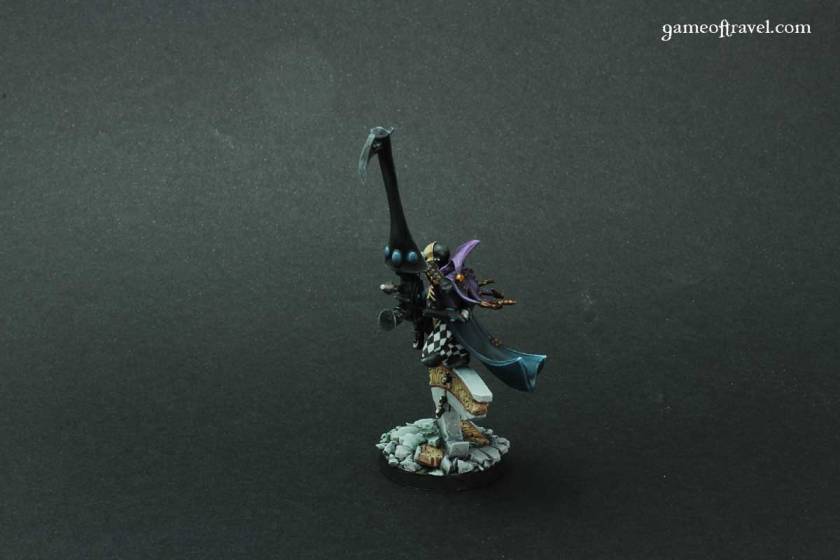 The coat, black as base blended into dark blue colours. Stegadon Scale Green (which is not green at all!) was my idea for highlights. I added few layers of SSG with little more white in every next layer. The tips of the coats are almost white (the same way  I painted Death Jester’s gun). 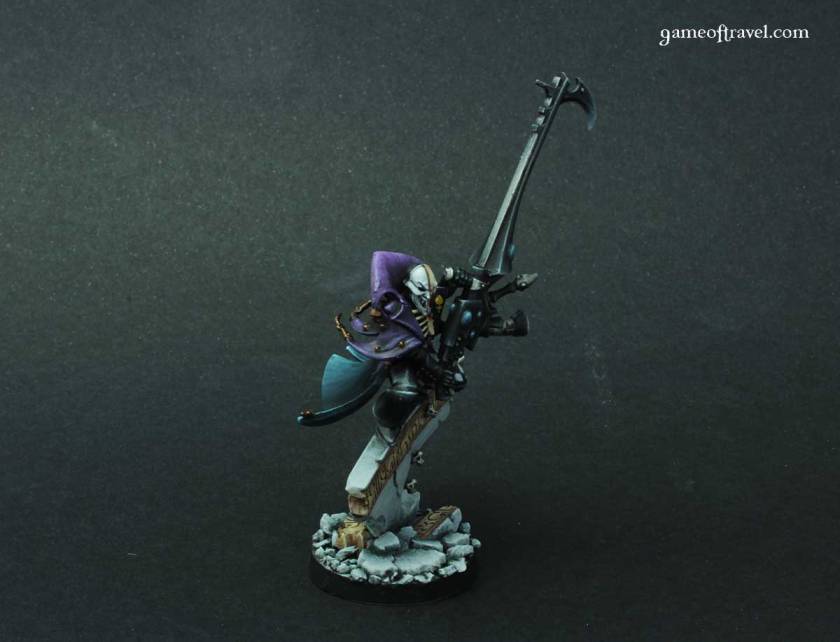 Ahh, and another thing. I prepared this model for our local mini painting competition. And I actually won first prize. As the winner I could choose – pack of 5 craft beers, some resin bases and 100 PLN (around 25 euro) gift voucher in local hobby store. I chose bases. Never enough of bases, I always repeat that:)

And what do you guys think? It it any good? 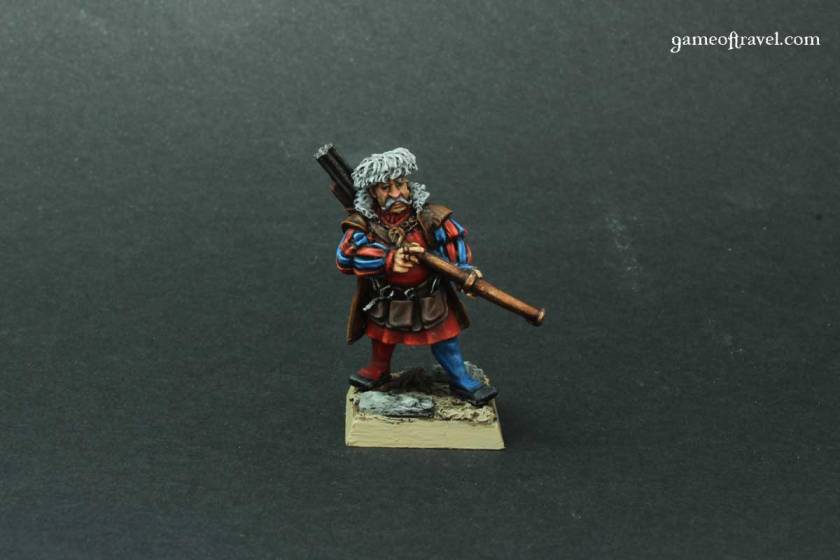 The model I have the most fun with.

First of all, I was pretty sure what effects I’d like to acquire and I was not forced to do any experiments. Second, no diamonds patterns, no free hands or lettering:) So, there was no stress at all. Just applying layers of paint and breathing with joy:) 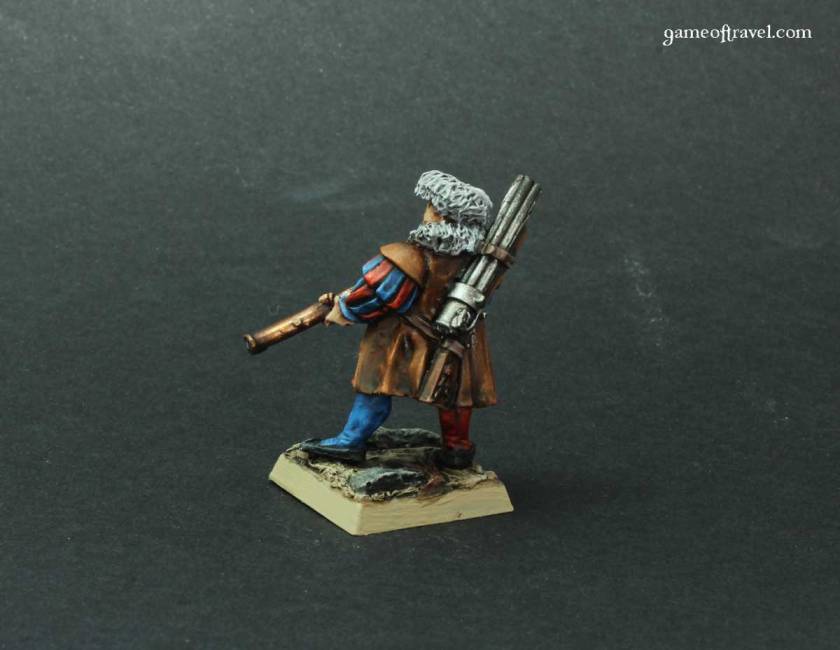 …and while I had so much fun with his moustached fat bloke, so I decided to implement some extra content to the mini. I decided to paint his face, with focus on nose and cheeks, like his was a proper drunk or it was exposed on freezing cold air (you can choose whatever version you like. Either weather/child friendly and pub/adult version. Up to you;). 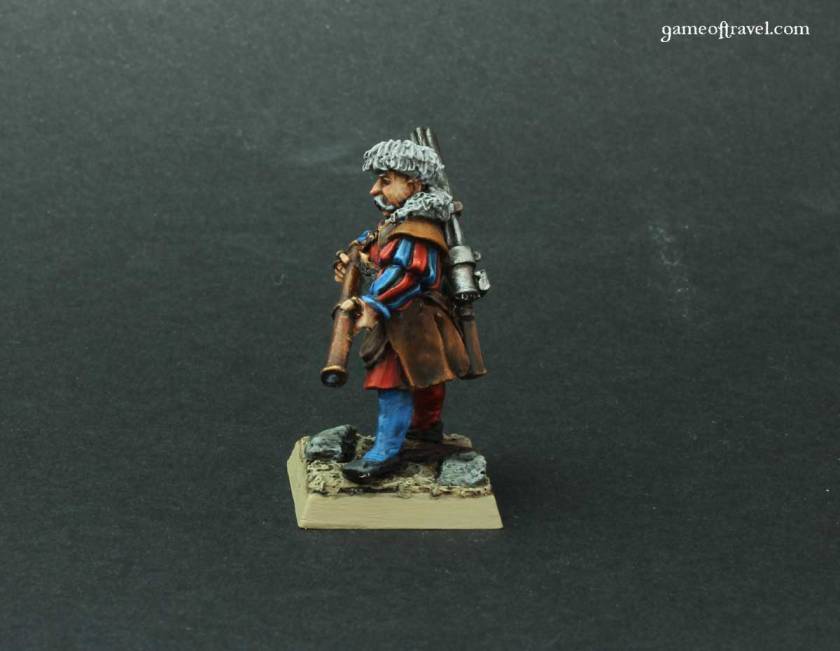 It wasn’t that hard to get effect. I just mixed Kislev Flesh with Evil Sunz Scarlet to get pink colour on cheeks and big fat nose. Simple as that – and it looks just nice:) Don’t you think?

At first I was thinking to paint Engineer in Nuln colours (black/yellow), but finally I decided to stick with Altdorf (blue/red). Back in the days, in late 1990s, when I was collecting Empire army, I was painting them in Altdorf colours. For me it was pretty obvious. Emperor Karl Franz on the lead, so his army will be from the capital as well – Altdorf. So, this model is my tribute for my old Altdorf army. 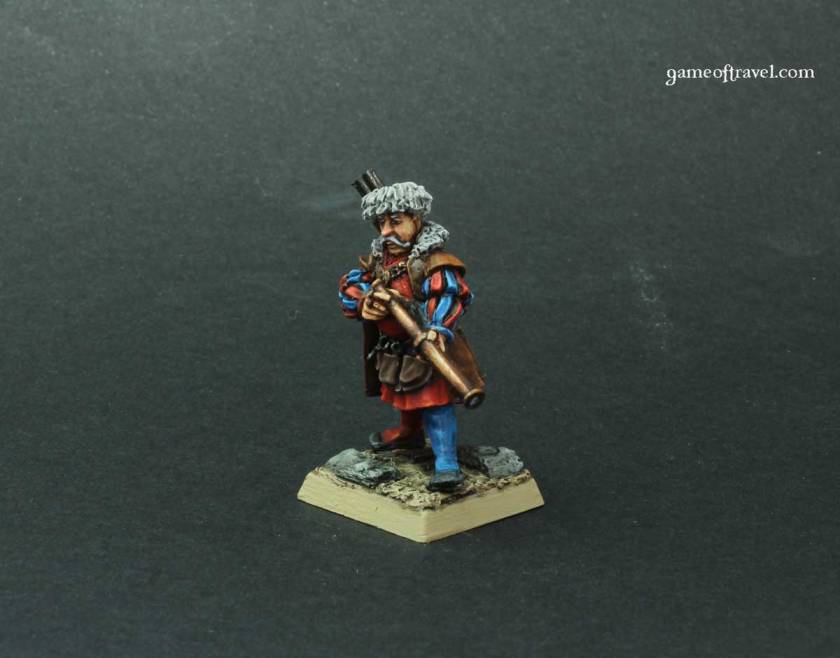 And actually, the model is from 6th edition era, so everything suits my concept.:). Unfortunately I have no time to collect Empire army right now, and this fatty is also going on Ebay sale.

Plans: So, that sums up my last two week of painting. It took me a while, especially with Ultramarine, but I had amazing time. Next, I plan to finish Queek Headtaker which was prepering for the battle I had two weeks ago. He is ready in 99%, still some highlights and few details to do and I can call it ready:). After Queek, I plan to enter painting competition in my local GW store. The idea is to grab one character blister and paint it. Simple as that. If I have any chances? Who knows? For sure, it does no harm to try. I’m going there next week, and see what they have in stock. That will be fun, I tell you that:).