I missed painting Skaven. I really did. After quite some time (over a month I think) during I was painting other stuff, finally I decided to go back rat army. It was too long, I tell you that. I find Skaven most rewarding and relaxing miniatures to paint, and there’s no way anything could beat that (that’s my personal opinion, so do net get angry or abused;). Of course, too many Skaven miniatures in the row will be too boring to handle, so that’s way I paint some different things from Warhammer and other games as well. There’s one thing certain – I will always go back to Skaven. They will always have priority when it comes to painting and gaming. Yes-yes!

Anyway… these are my latest addition to my army.

Plague Censer Bearers. Great models with really wicked rules included. At least for Warhammer Fantasy Battle (no matter the edition). I’m not sure how they work in Age of Sigmar (not a very big fan here;), but with no doubt these awesome minis will work in every setting.

About the rules. Across the years, starting from 4th edition, the idea behind Plague Censer Bearers remained the same. Frenzied, driven by hatred disciples of Clan Pestilens. Fanatics devoted to idea of spreading the plague all over the world. In the battle they carry censer filled with shreds of infected Warpstone, realising infectious vapour all around them. As they seem to be resistant to the effect of vapours, they can swing with it around – smashing them with censer like with flail. The deadly smoke causing instant death for those who are not Clan Pestilens followers.

These are really fun rules, I tell you. Especially in 4/5th edition (my favourite one), where the censer gas has the radius of 1 inch around the bearer, so it reach to second rank of 20mm based unit. One Cencer Bearer would affect then 6 enemy models. They need to pass Toughness test, or they get one wound with no saves allowed. Plus they have Hatred and Frenzy. True living, walking unstoppable killing machines. In following editions, the one each radius of poisonous smoke was replaced by base to base contact, which was significant downfall, but still The Bearers could bring lot of fun to the game, especially for heavy armoured troops or cavalry units (no armour saves allowed:).

And in 4/5th edition, they were covered with cloud of vapours all the time, and therefore they had -1 modifier for all enemy shooting and close combat attacks. If they were not the toughest Skaven unit, they were for sure next best thing after Rat Ogres:).

Models. The unit I painted contain 9 models. Why such unusual number? Well, it was all the matter of Ebay deals I found:). Two, to be exact. 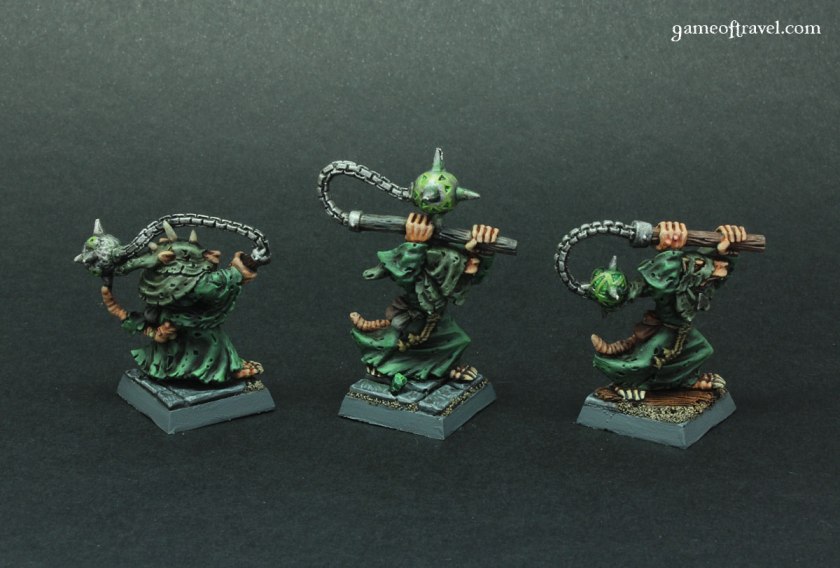 First, it was huge batch of Plague Monks, few Clan Skryre Engineers and 4 Plague Censer Bearers (6th edition Lustria campaign models. I believe, at the moment they are the ones available in official GW store). Second deal – 5 old metal Bearers. All nine formed one unit, and they were ready to be painted and play.

I think, I should aim sacred number of 13 in the unit, to get blessing from Horned One or something. Never believed in superstitions, but who knows? Maybe magic of thirteen will bring me luck in the battles… So, I need four more, and the regiment will be done. But, for now, nine will be OK.

Personally, I have the strongest emotional attachment to older models from 1990s. There were the times, when I was collecting Skaven for the first time. And I had plenty of those Pestilens fanatics spreading havoc among enemies of Under-empire. However, while painting the whole nine, I started to like Lustria Brothers even more. Filthy, covered with cysts and ulcers. Mouth wide opened, with two row of sharp teeth and tongue red as the Bloodletter. And those obese, fat bellies. Awesome! I love them from the first sight! I think when I will be completing my sacred 13 – at least two need to be models from Lustria.

Painting. Green is the colour. It suits to Clan Pestilens. Robes are Waaagh! Flesh Green and hoods are Castellan Green. All washed with Aghrax Earthshade. Waaagh! is gradually blending into Warboss Green. The highlights are said colours with white. Simple as that.

Censers. Metal spheres filled with shredded Warpstone. Glowing green light from inside. This was tricky. Lots of different shades of green (plus few washes) were used here – Caliban Green, Warboss Green, Warpstone Glow, Loot Green. I don’t even know how exactly explain how I painted this. Let me just say – the paints were heavily watered down, to get smooth blending effect. Hope you like it :).

Bases. As usual – Wyrdstone bases from Fantascape. Only choice for my Skaven army.

After Plague Censer Bearers, I need to finish Plague Monks finally. I have them painted, but there is nothing to brag about. It was crude, ugly speed painting to have them ready to one of my April 2016 battles. But, not at the moment, unfortunately, I have other urgent plans..

Speaking of plans: Here comes the challenge. Huge challenge. For next month I plan to concentrate only on one model. Hell, I’m little bit overwhelmed with that. All because of the next edition of our inner friendly painting competition. Our closed Facebook group competition. This time, we are supposed to paint large model – vehicle or monster. Whatever we choose. And I plan to focus all my efforts on one model only for almost the month. Well, this going to be long month, no doubt about that. Never paint such large model before. So, taking deep breath and going for it!

What model is it? Soon it’s going to be revealed. Next week probably – I will post some progress photos (if it will be any:). Wish me luck!