Let me present Fulgrim, The Primarch of Emperor’s Children, The Third Legion of Space Marines.

Horus Heresy is a big, big thing. Something that I wanted to go into for a very long time. It’s stuck in my head and I can’t get rid of it. The questions were – how to do it, how much money invest and what’s more important – what’s exactly to start to collect…

This was a huge brain teaser for me. Believe me. For a last couple of years I listen to Horus Heresy audio books whenever there was an opportunity. During paint sessions, travelling, jogging. Really, whenever there a gap, I grab my mobile and set of phones and get into  it. And I must say, it’s awesome! Really great stuff to listen to. So intensive fluffwise and, I’m must confess  – it’s amazing marketing tool. I mean – after each book, Forge World’s page was opened to look for some miniatures connected to the Legion I was listening about. It was only a matter of time which Legion I will be investing my money into. I just needed to make up my mind.

It took me some time. Little bit of changing my mind on the way, but eventually I was there. Emperor’s Children – that was my final decision. Blood Angels will be my second Legion as soon as Sanguinius and the bunch will be released (probably in a couple of years). 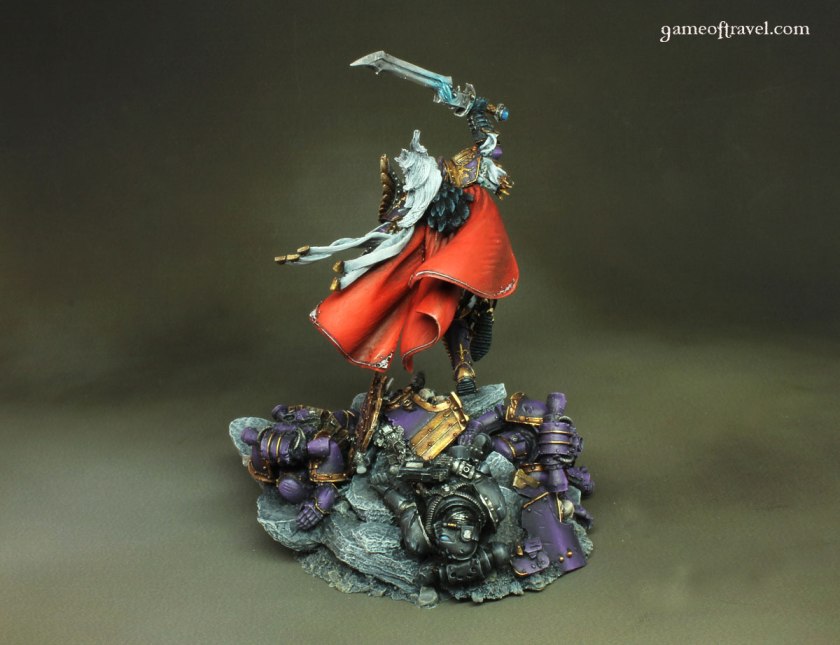 So, the best idea to start the Legion, is to start with it’s Primarch of course. First, the boss, and then his henchmen, right?

I got Fulgrim in my hands in August 2016, and almost immediately I started to clean and assembly the model. Seeing Fulgrim is so detailed model with so many tiny patterns to paint on his armour, I knew he will cause me pain. And if I’m forced to paint one model for longer period of time, I suffer. I start to procrastinate like crazy, and whole painting job is not going well. I decided then to go with unusual painting approach. I figured out to avoid a boredom, I need to divide whole Fulgrim  painting process on a few periods of time. The idea was to paint some miniatures, and then spend a few days to push Fulgrim project forward. Then back to other models. When finished, back to Fulgrim. And so on. Until Fulgrim is done.

I started to paint it in December 2016, and finished him in May 2017. If you follow me on Twitter or Instagram, you could get a chance to look at sneak peak work in progress pictures of Fulgrim I was posting from time to time between other projects. Due to the blogging laziness, there was no updates on the process here (sorry about that), but here are the pics of finished model. Better late than never, right?

I loved the painting process. I realised that purple is one of my favourite colours to use. Highlights with Genestealer Purple over Xereus Purple base look really amazing. The idea of painting a whole Legion with that scheme is great. Very good choice for Horus Heresy indeed:).

And the idea of dividing the painting process into a few stages was a proper one. Of course, the break between shouldn’t be too long, not to get lost with colours and painting schemes in your head. However, I controlled the risk. Fulgrim model was in front of me all the time, whenever I was working on some other miniatures. So, the necessary mindset was on. There was danger of Fulgrim to get off my radar.

What’s next with The Third Legion? Oh, I have plenty of ideas what to do. I have stored full Betrayal at Calth box set. Unassembled. Plus Emperor’s Children Forge World’s upgrades for all the Marines from that box. I have Kakophonii, Leviathan Dreadnought, Spartan Tank. And I have Lord Commander Eidelon aka The Badass! So, as you can see, there’s plenty to choose and many ways to go on with the project.

Of course, many months will pass until I paint enough of The Legion to be able to play proper battles, but no worries. I figured out long time ago, that the painting and army building/collecting process is more fun for me, than actual games. So, I can’t wait! Happy days ahead!