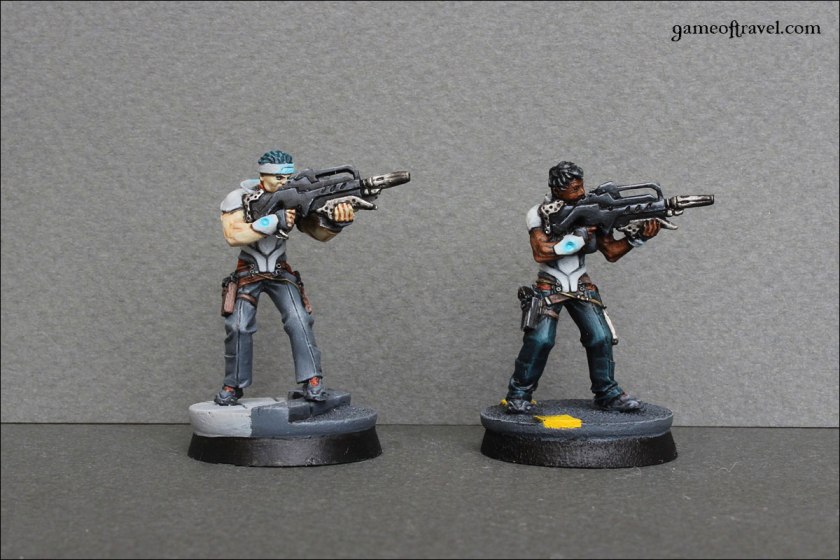 Another batch of miniatures ready. Recently I’ve adjusted the way how I paint them. So far I have been painting one model at the time, but recently I’ve decided to change the tactics. I paint at least three models simultaneously. This is efficient way of painting, but I need to be settled down for at lest few days. Setting up my painting station and juggling between minis for one day…hmmm…no can do…too lazy for that:).

…but when I was staying on Panglao Island, I have been able to set up my workplace for a little bit longer (10 days near to lovely Alona Beach – charming place!) and I could work on three minis at the same time without the hassle.

Advantages. First of all I do not get bored so easily. Diversity is the key. If I fell like painting faces, I paint face, but in actual moment I want to paint the base or, let’s say, pants, I do so. I can jump from one model to another, whenever I want to. The second thing. When ink or paint is drying up I can concentrate on different model, and therefore save some time on doing so.

Why I haven’t paint this way before? Do not know honestly. I had one small episode of working like that, but I believe the timing for that was not so good. I was working on some of the models for my Skaven army (I don’t recall which one), and trying to paint Skaven Engineer at the same time. I did not end up well. I din not finished on time the miniature I wanted to paint, and The Engineer is still unfinished to this day. So, lesson taken  – if I decide to work on few models in the same time, I need to plan ahead and do it wisely. It’s the matter of patience and steady arrangement of the work. If free time is ahead, I can easily focus on work I planned.

So, my new work plan. At first, two Moderators for Nomads Bakunin faction from Infinity and Mr Cheng from Wolsung. As Mr Cheng need to be tweaked slightly – Moderators are ready.

…and I’m closer to finish my Bakunin starter army. To achieve long-awaited 300 points, I need to finish just 4 models. One more Moderator (sniper), two Reverend Moiras, one Reverend Custodier and Sin Eater. And once it’s all painted I can finally start playing. The plan is to do it in a month or so.

As for the moderators. It seemed to me a good idea to painted them together, as the models are almost identical. Same armours and guns and the same pose. All I need to plan – different painting scheme to avoid the confusion later on the tabletop. 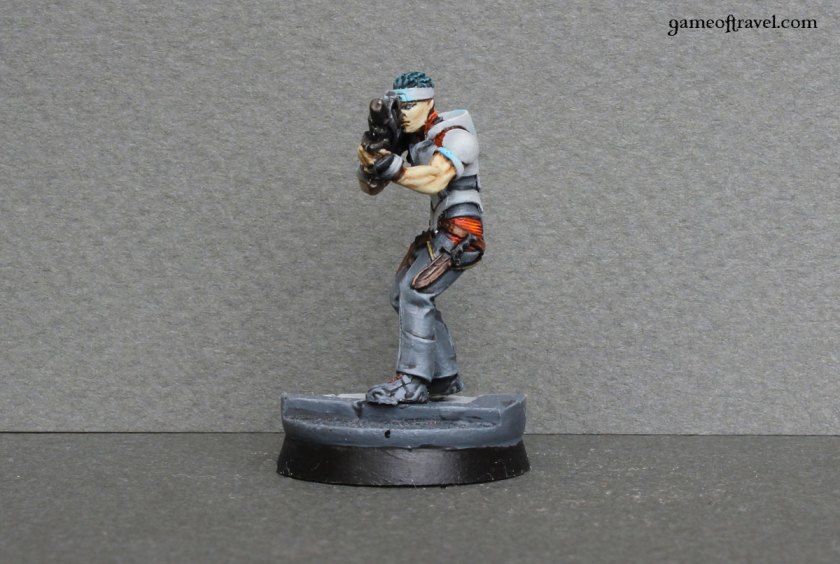 I’ve decided that the best idea to avoid the situation they look like twin brothers is to paint their skin different colours. So, one guy has pale tone of the skin and second is black. This way nobody should mistake them.

The black guy – base: Mournfang Brown washed with Nuln Oil and slightely highlighted with mixture of MB and white.

Painting scheme for armour and gun – the same as for the rest of my Bakunin crew, rather copied from official photos of Corvus Belli referral photos. Black guns and white armours with sky blue lights on it. Most annoying colour to paint if you ask me.

Armour – even though it’s white, as base I used Administratum Grey once again, and gradually I was toning up to white by adding Skull White to AG, making the armour lighter and lighter. Only edges of the armour are 100% white.

The models are part of Nomad Bakunin Jurisdictional Force Starter pack, available on official Corvus Belli online store or in many of independent retailers like Wayland Games.

Infinity almost done, and thankfully only one more Moderator to paint to complete 300 points. I’m kind of fed up painting these:) …but despite the fact they are mediocre soldiers, Moderators are essential to get more orders for the army. And without orders, there is no success in Infinity (I guess. I’ve never played it – as I mentioned few times:). Soon, I try to achieve it, playing my first game. Can’t wait:)

Plans for the future: Last day in Manila. Tomorrow heading off to Kuala Lumpur, but only for one day. After Kuala Lumpur – destination: Thailand once again. And once again: Koh Chang. Perfect place for leisure and for work. And quite suitable conditions for miniature painting. I will stay there for over three weeks and 15th march going back to Poland. Second turn of Game of Travel is soon about to end. Summary soon!