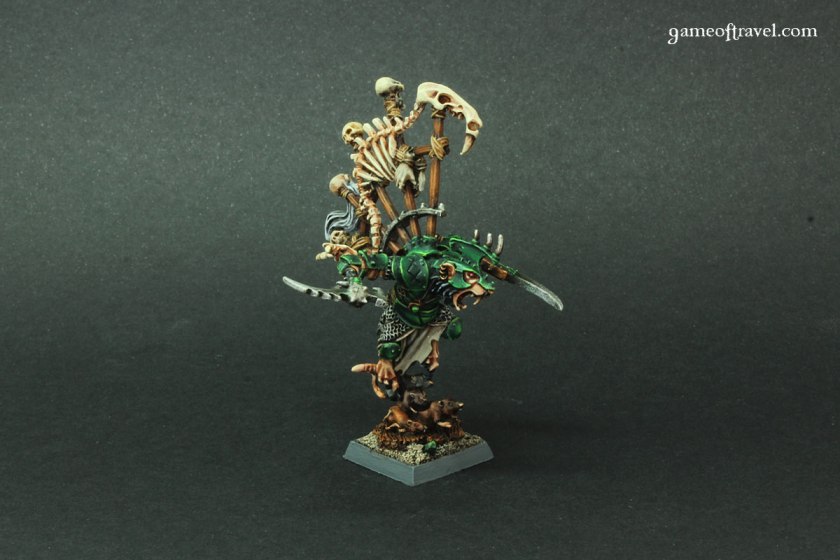 After all these weeks, while I was painting anything but my beloved rats, I’m finally going back to my personal project and army – Skaven.

About 3 weeks ago I was playing 5. edition battle against Dwarfs (battle report available on my blog), plus I got into Warhammer 8th edition tournament (report also here:). And that was good opportunity to paint some reinforcements to my army.

First of all, I painted bases, lots of bases. All my Skaven units were based on just simple green plastic bases with no rocks, sand or grass. Just ordinary plastic. Little bit sad and pathetic, I know, but I didn’t have any time to get them done. So, with upcoming event on the horizon, finally the time has come to base all of them (120 models:), to made them look good during battle against Dwarfs and WHFB tournament.

Next thing. I thought, I may use Plague Monks (in both events as well). I had these nicely black primed models from the times of 3th, 4th and 5th editions, just waiting to be painted nicely. The problem was, I had only two weeks to finalise all of this – I miscalculated free time and … I ended up with speed painting. While I try to avoid this method at al cost, that in this case the alternative was not to use Plague Monks at all . And I wanted themso baaaad! In my defence, I can only say, I thought two weeks is more than enough time to finish them before the deadline. I forgot of course about such meaningless daily activities like sleep, eat or work:P.

…and also I thought I could paint Queek Headtaker. And, whoah, I almost made it. I finished around 99%. So, I can only guess, I wasn’t able to get done all Plague Monks because of Queek of Clan Mors.

…but it was totally worth it!

Queek, the meanest, the largest, the bravest and most ambitious of all Clan Mors Skaven. Protege of Warlord Gnawdwell, member of Council of The Thirteen. That was enough, for Queek to climb high on the career ladder in all Skaven Under-empire. Queek was sent by Gnawdwell for countless number of mission. He defeated many opponents. The rumour was, that Queek can’t be defeated in close combat. He is able to kill anybody in the challenge. And his mortal enemies – Dwarfs… 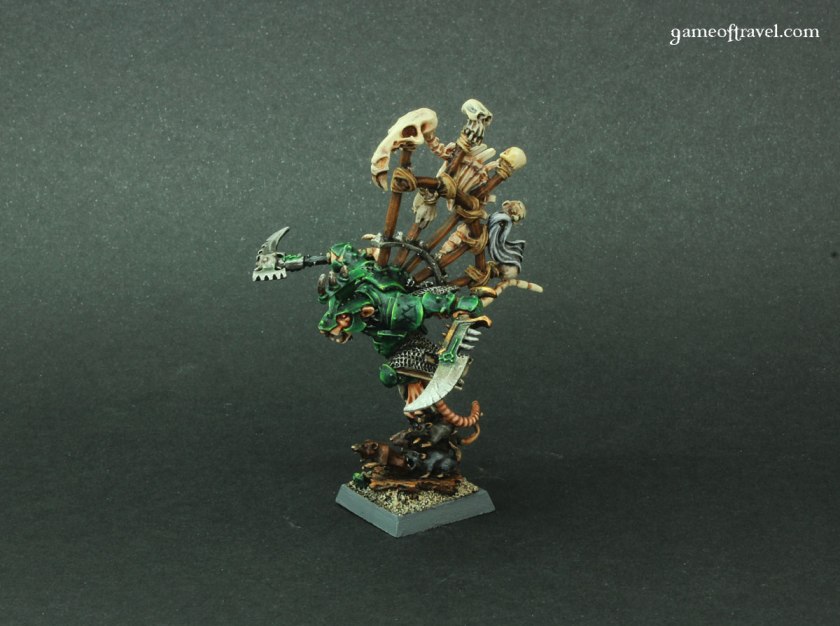 …and that’s why he is the best choice for general against any Dwarfs army. My recent battle against Dwarf-things was perfect opportunity to make a use of Queek and test him in battle. Admittedly, the battle I played was WHFB 5th edition rules, but Queek didn’t change a lot across the years. Every edition, his rules are similar. Fancy fellow against Dwarfs, no doubt about that. 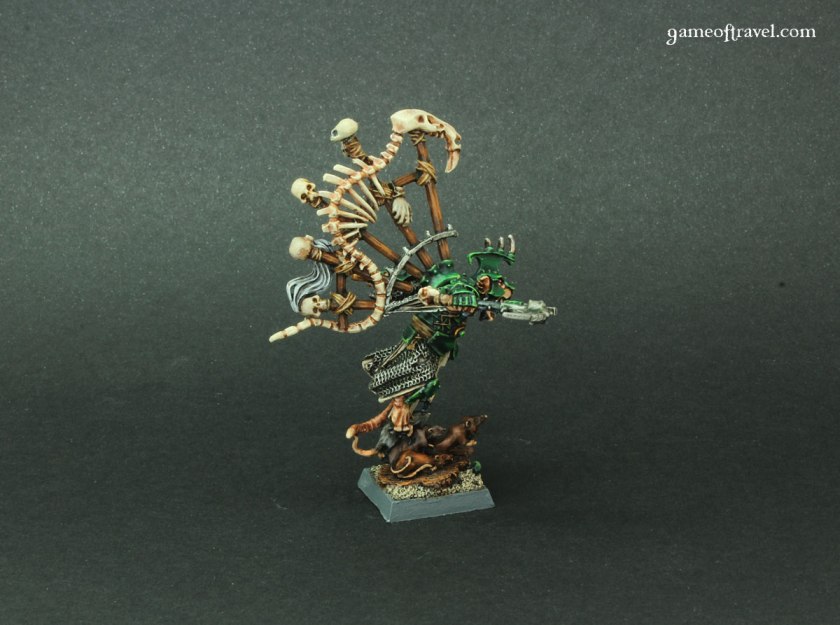 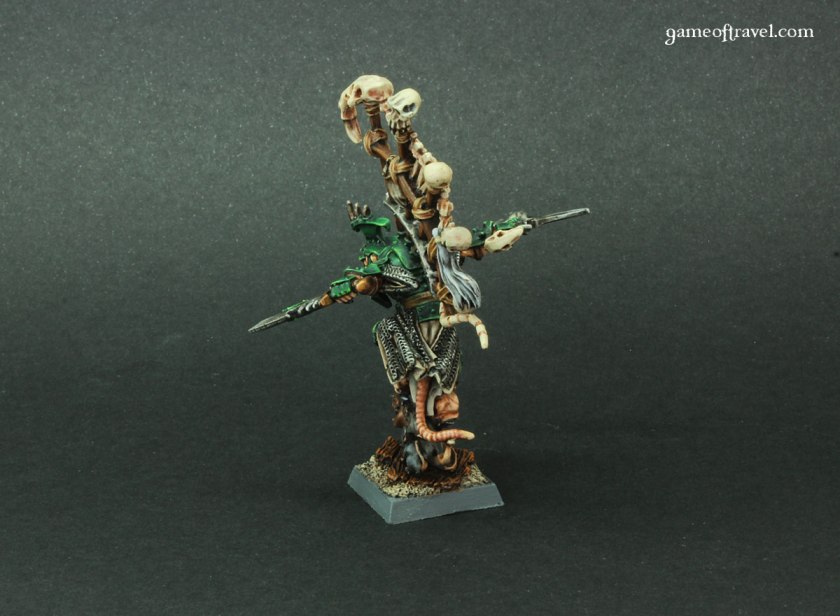 Second. His Dwarf Gouger. Always wounds Dwarfs on 2+. 4/5th edition – minus 3 save modifier and inflicting two wounds instead of one. 7/8th  – no armour saves allowed. Dwarfs beware! Beside that, Warpstone Armour in 4/5th ed. – ward save +4. And Warp-Shred Armour in 8th – heavy armour that reflects saved hits with Strength 5. In 4/5th edition, Queek has two empty slots for additional magic items, beside Dwarf Gouger and Warpstone Armour. Not every character in WHFB had that possibility.

Third thing. In the challenges, Queek receives +1 bonus to hit and to wound rolls. That’s massive. As the bravest warrior of all Skaven, he can’t refuse any challenge call, but look what he gets instead! 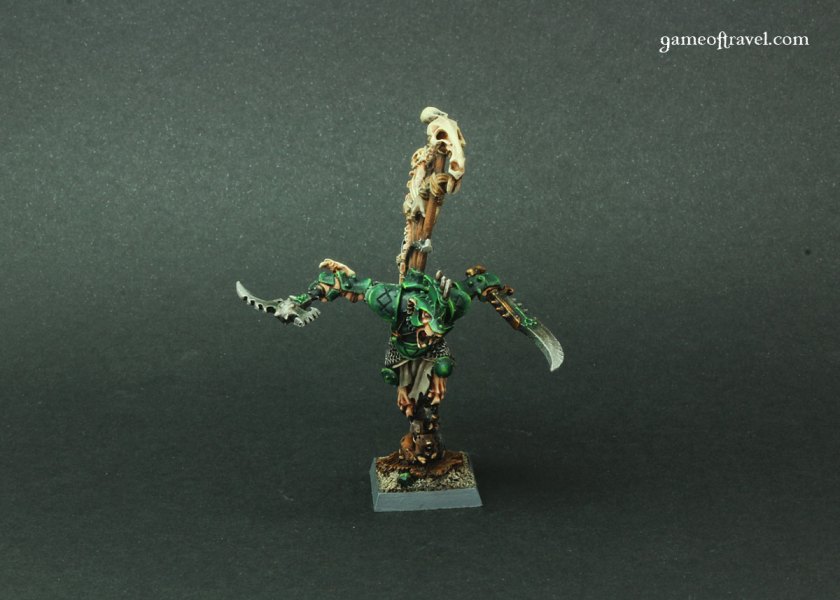 In 7/8th edition Queek could deploy personal unit of Stormvermin with +1 to WS and +1 to S. They are probably the most skilled fighters that Skaven players can use.

During the battle against Dwarfs, I failed to use Queek in the way that he can show maximum of his abilities and magical items. I put him in the unit of Stormvermin deployed on the western flank. They wiped out entire Thunderers unit and Organ Gun. But not even single character stood on Queek’s way to test his legendary fighting skills. And while they were annihilating entire western flank from all Dwarf presence, in the centre Skaven army was almost totally destroyed. I can see my mistake – I should put Queek’s Stormvermin more in the front of the army, that he would call Dwarf Lord for challenge. Too bad. Hopefully next time.

Whole battle report is available here. You will get the idea what exactly went wrong in this battle.

As model itself. It is metal version of 7th edition (I guess, but not sure. Maybe 6th?). It’s much better ( in my opinion), dynamic pose than Queek form 4/5th edition. The old one also has it’s style, but I prefer newer one. These tiny rats in Queek’s feet are just adorable;).

Little disclaimer: In Age of Sigmar, Queek Headtaker model is to be bought as common Skaven Warlord. In few years probably, only old veteran players will remember existence of Queek. For newbies, no Queek, but simply Warlord…

My painting scheme. In general, Queek in almost every referral photo (following the official GW scheme) has red armour with some glowing green illuminations. My idea was rather different. I imagine his Warpstone Armour as ENTIRELY made of warpstone, not with some pieces of it. Queek in this green armour look distinguish and noble, IMO. Like someone that not to mess with. And red? Well, when you look at many Warhammer characters – there are plenty of red armours there. Everyone wears red this days. My version of Queek is kind of hipster of Old World. Wearing green before it was fashionable;). But really, green armour is wicked, don’t you think?

For base I used as for every Skaven in my army, resin Wyrdstone base from Fantascape. Top quality products for reasonable price, if you ask me.

This way, Queek joined Ikit. And I have a two of special characters painted (No, wait! I have also Deathmaster Snikch, but he was painted so long time ago, that I’m not even sure that I should count him in:). Next in line to join the party – Lord Skrolk, Clan Pestilens representation. I don’t know  when I’ll find the time to paint him, but, yeah, he’s next.

Plans: Few battles ahead. Mostly Warhammer Fantasy, but also Malifaux. I had few Malifaux games already and I finally managed to get the idea how to play it right. Few battle reports coming soon. May – I stay  in Warsaw practically whole month, but starting form June I’m going to visit few European Cities in Norway, Netherlands and Germany. Game of Travel, here I go again!