Another battle ahead and my Skaven go to war once again.

This Friday I will face hordes of Chaos Daemons, Warhammer Fantasy Battle 5th edition. Good ol’ Herohammer. The best edition, if you ask me. Full of overpowered combos and invincible characters, who may unbalance the game significantly. On the other hand, if both players remain reasonable with their army lists, the game is smooth and nice.

So, can’t wait Friday! My Skaven will fight to send back some Daemons back to hell!

My recent kind of painting challenge is to paint at least one character or unit (or single model, when it comes to skirmish games) to add to the army before every next battle. To have something entirely fresh, never deployed before. To add extra content to the game. In that way, next game will be little bit different than the previous. Even if it’s one character. Like in this case – Lord Skrolk of Clan Pestilens will provide new quality to the army.

Some time ago, in one of the posts, I was writing about idea of building 100% Clan Pestilens army. For an army of 2000 points in WHFB 8th edition I would need exactly Lord Skrolk, 2-3 regiments of Plague Monks, Plague Censer Bearers, Plague Catapult and/or Plague Furnace. Lord Skrolk as general will allow to choose Plague Monks as core choice, so it would be possible to make an army made entirely of pure Clan Pestilens. Awesome and tempting idea, but it requires at least two units of Plague Monks as absolute minimum. I have one regiments of Monks, that I can call it ‘painted’ (they need few final touches to be finished). One more unit is needed then. Yes, please, not before  I finish the first.

So, no Clan Pestilens army for me at the moment. Lord Skrolk though is finished and he will wait for his Clan.

Meanwhile, he will be designated as general for my Skaven army against Daemons this Friday. This will be semi Pestilens Army – as a partner for Skrolk, I chose Grey Seer on Screaming Bell. No Doomwheels this time (wait, what?!?!), only infantry units. Plague Monks, Plague Censer Bearers, Clanrats pushing The Bell and Slaves. My typical troops choices.

Lord Skrolk in 5th edition is a true monster! He is frenzied, and in 5th edition it means his 4 attacks are doubled (8 attacks!). Then, he wields Rod of Corruption. Every successfully hit with The Rod forces enemy model to make Toughness test (6 is always fail) or die with no armour saves. Imagine that, with his 8 attacks. Ha! I feel like hunting Greater Daemons this Friday!

Another thing. Terror! Lousy Daemons in 5th edition aren’t immune to psychology, so Lord S. will cause Fear (Daemons cause fear themselves, so Terror for them equals Fear).

My only job is… to get Skrolk to combat as soon as possible. And then, we roll! (hopefully…)

Lord Skrolk is awesome sculpt. One of the classics from 1990s, that was kept in Games Workshop trough decades. Of course, in The Age of Sigmar, everything changed – The World That Was is destroyed, so Lord Skrolk is gone as well. The miniature survived, but like many others, he is now no-name model  – Plague Priest of Pestilens. That’s kind of sad. Old heroes passed away. New era and new big names are in play now.

I bought mine Skrolk on Ebay for a fracture of market price. The main problem was a thick layer of paint on it, so it was necessary to strip it off. Two nights in the jar with solvent and old paint should be gone. It should, but I don’t know what kind of paint it was, cause it was stuck in so many recesses with no intention to let go. I spent additional few hours with a needle to wear off the rest. So, at the end – I save some money on the model, and I spent extra time to clean it. 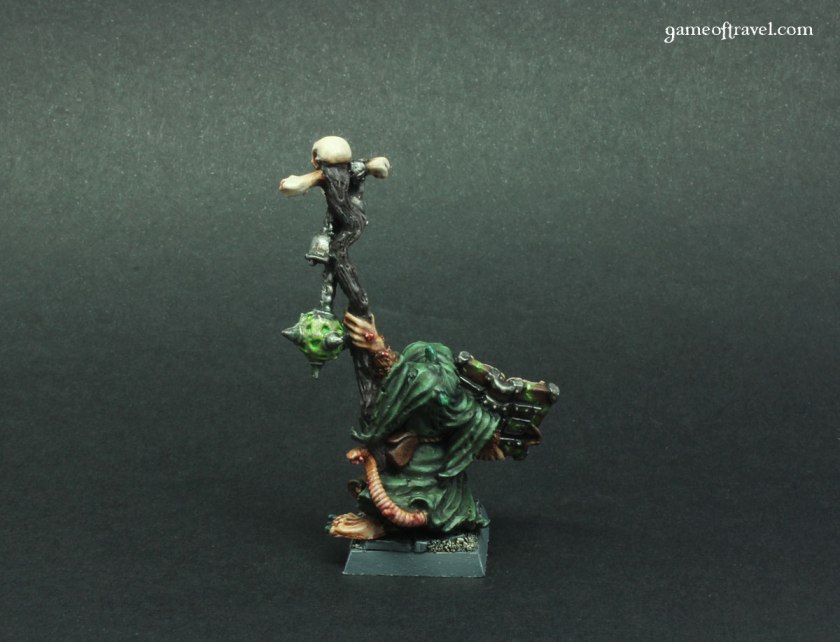 About painting job. It was a true pleasure to work with Lord S. This is one of my favourites of entire Skaven range. Old and new ones. Plastic and metal.

For robes I chose green. Death World Forest seemed like perfect choice for base layer. The rest is mixture of Warboss Green, white, and different shades of washes.

Skin is Kislev Flesh, with several shades and colours to represent diseases and ulcers.

Rod of Corruption, is a simple staff with the censer on the chain. The globe is full of holes with poisonous warpstone shreds vaporising around Lord Skrolk. I tried to paint the glowing green light effect with discrete OSL. Base colour for that is Moot Green.

The most effort I put on the book, Liber Bubonicus. Well, I’m not good with free hand, but what I noticed – with every next free hand, logo, writing, or even decorative letter, it’s getting better. It’s obvious truth – experience is a key to every activity, every job. So, please, keep fingers crossed  for my improvement in free hands. And what do you think about my humble head of Horned Rat? Is it OK?

Disclaimer: Fantascape website seems to be down. I’m not sure what’s happened, but I hope they will still provide their nice products.

And here it is – Lord Skrolk. Waiting for Friday, with his rat men. Just two days:).

Plans for future. Exiting times ahead. September will be awesome. First, I fly to Japan for two weeks (this will be my wife’s birthday trip:), next I’ll help to organise first Oldhammer Weekend in Poland (details soon). And in October, I start another Game of Travel chapter. I’m going to pack brushes, paints and miniatures and off I go away from Poland for at least three months. Where? Not sure yet. This is about to be decided soon. First – Jamaica and Bahamas. Next, South America or Australia. We’ll see:) For now, I’m, back to painting. On my  desk at the moment – Orc Commisar for WH40k, Orc Weirdnob for Age of Sigmar and Blood Angels Tactical Squad. Back to work then!