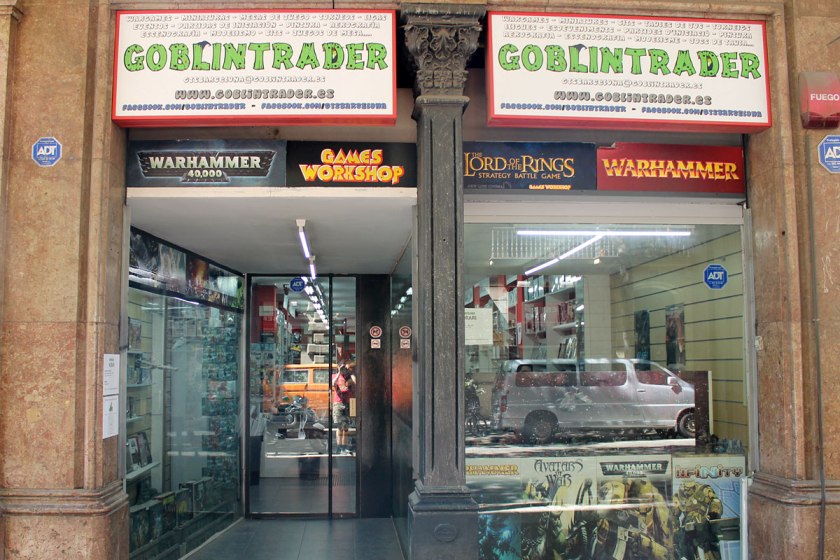 Have I mentioned it already? Probably few times in many different occasions, but if not, I’m doing it now (again) – next week I move to Barcelona!

I’m super excited about this. Barcelona is in my top 5 places to live. Warsaw still remains number one, but I feel (or rather we – me and my wife), the shift would be good for us. It’s not going to be permanent, but at least two years will be nice time to have it there. Of course, it means our life will change a bit – the blog will become little bit less about travelling, but well it’s going to be still about games. And that’s what matters the most.

Anyway… new place means entirely new setting and new gaming community. It’s going to be hard to fit in 100% like in Poland. After all I will be newbee, with only communicative Spanish. And believe me Spanish (or Catalan) is necessary in Catalunya. The people out there are not so good in English. Not at all. So, either way I need to practice my Spanish more or find some expat players to stick with. Will see, but first option despite it’s more challenging, is more reasonable.

Last August I was in reconnaissance mission in Barcelona, looking for hobby places I could hang out when I’ll live here for good (or it was just nice, relaxing summer trip to one of the best cities in the world – called whatever you like:). And after short online research I found the proper place.

Goblin Trader Store is exactly what I was looking for and hoped for.

Whole Goblin Trader brand is the chain of 4 stores located in Spain – Madrid, Barcelona, Zarragoza and Palma, Mallorca. In May 2015, I was visiting in Goblin Trader in Madrid, and it literally overwhelmed me with incredibly wide offer. So, armed with knowledge of Goblin Trader’s location in Barcelona – I was pretty sure where to go, with fingers crossed that Catalan store will amaze me as well.

The store is located at Calle Girona 25, just few blocks from Arc of Triumph and Park Ciutadella. Central location, not to be missed.

The store is really spatial, arranged in two separate rooms. First – is the actual store area, filled with tons and tons of miniatures, games, accessories of almost all sort. Whatever your drug is you probably will find it here. And if not…well… there will be something that is catching enough to replace it. Long story short – watch for the content of your wallets. It may miraculously disappear, and all of the sudden instead of cash, you are leaving the store with bag full of plastic, resin or whatever.

The second room is gaming area. Big enough to fit about dozen of tables. shelves packed with all sort of scenery pieces for all settings – fantasy, SF, steampunk, historical… I was visiting the store around 12 PM and at that hour there was no crowd and three games were taking place – Infinity, WHFB (battle between Beastmen and Dwarfs – I don’t know which edition was it, but for sure square bases were used:), and X-wing. I have the feeling I will be frequent visitor of the gaming area.

Like I mentioned in previous paragraph, the store is full of all goods. Beside regular Games Workshop offer, there plenty of other systems, starting from other major players like Infinity, Malifaux, Warmachines/Hordes or Bolt Action… 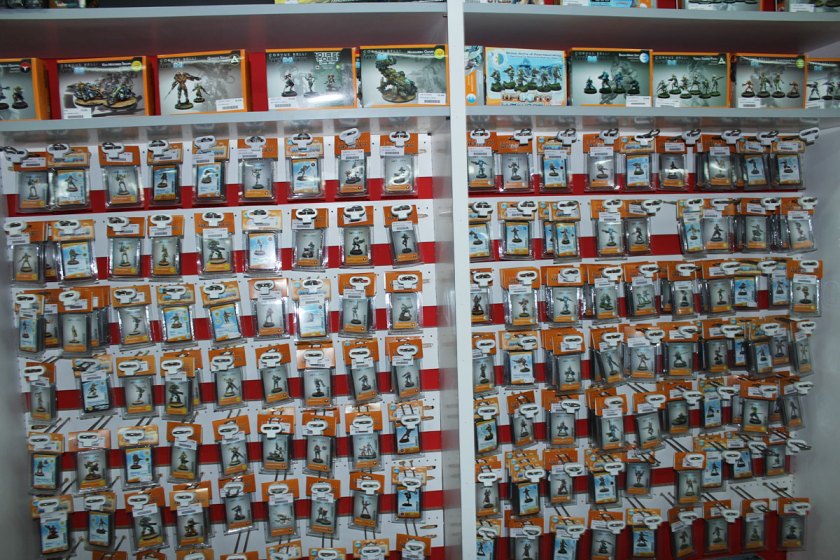 …and ending on small, independent companies – Raging Heroes, Russian Alternative or even some stuff from Poland like Micro Art Studio, Scibor Miniatures, Kromlech and Spellcrow.

Avatars of War. Fantasy Minis straight from Spain:) plus… Frostgrave. 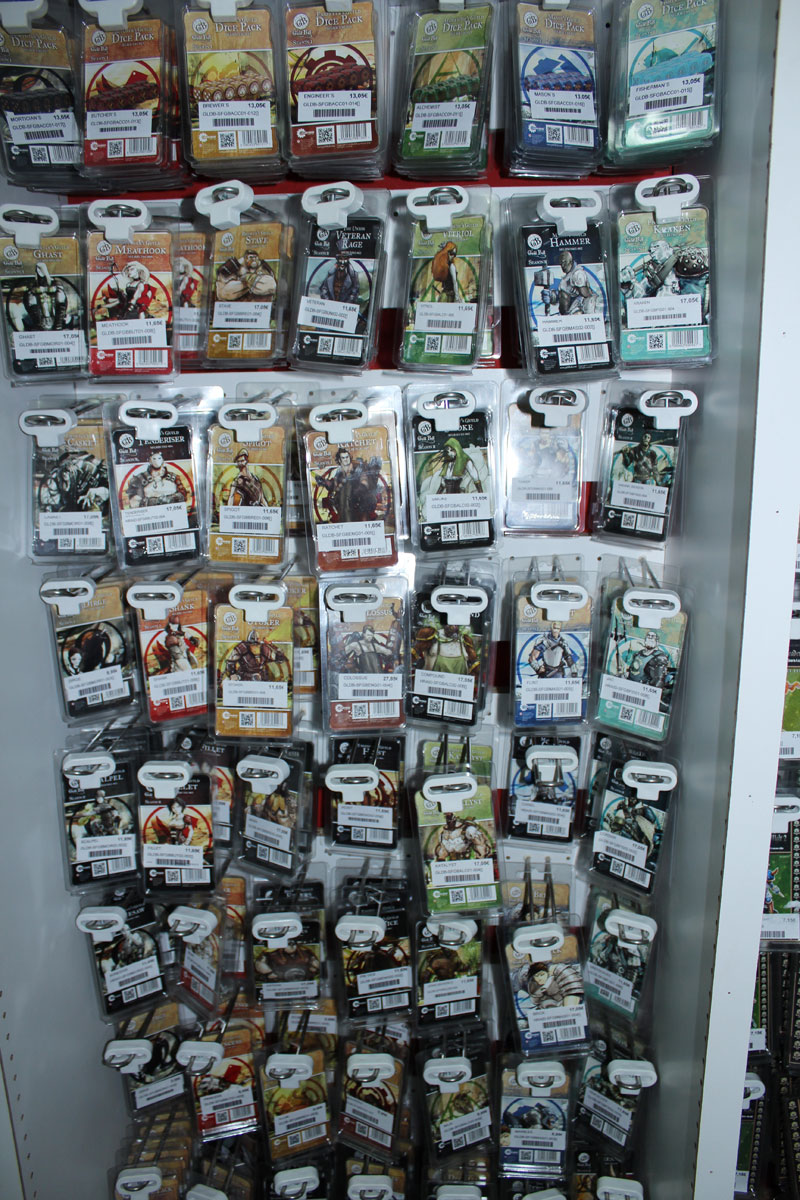 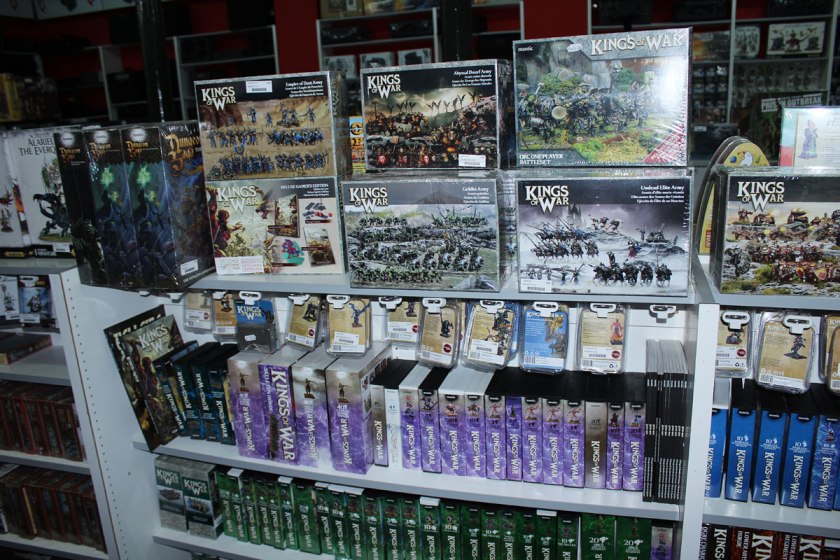 Raging Heroes – The Toughest Girls in The Galaxy! 🙂 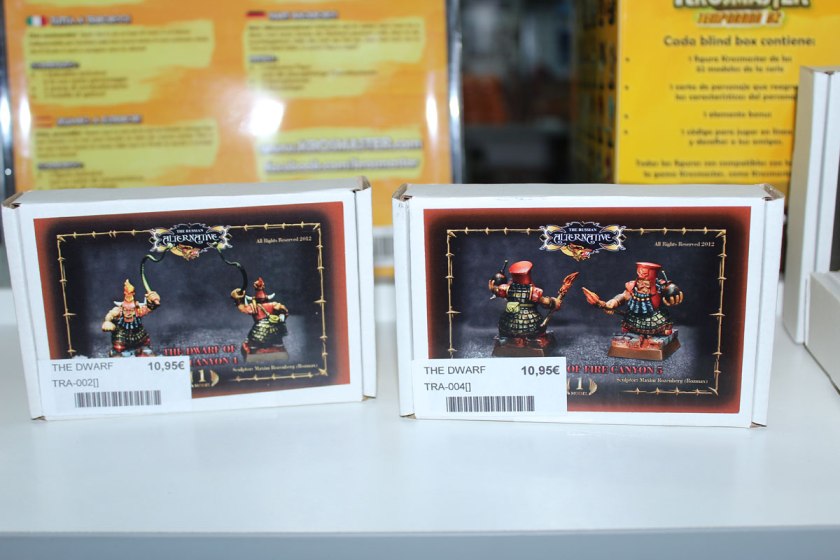 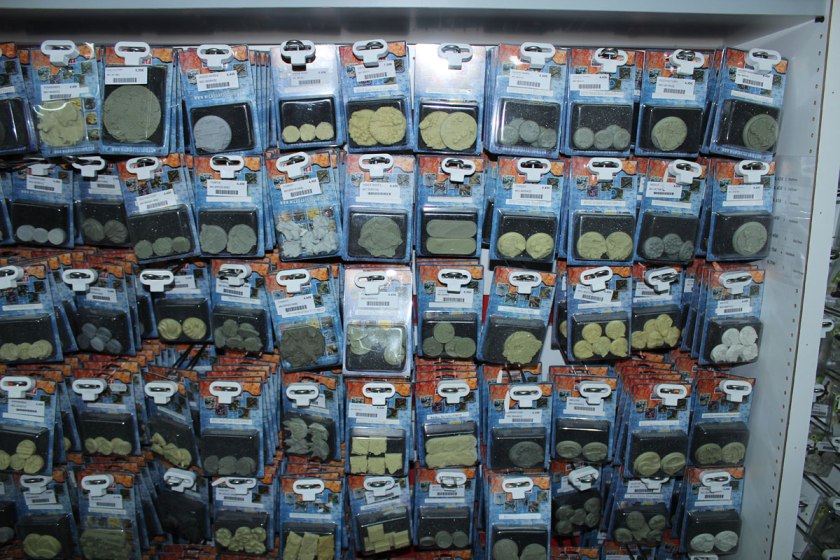 …plus some stuff from Poland – Micro Art Studio bases…

…and Kromlech – Warsaw based company:)

Beside that, brushes, paints (Citadel, Vallejo, Army Painter), accessories necessary to play for any type of tabletop games, plus card and board games.

In other words, paradise for all gamers. I think though in Madrid is wider than in Barcelona store, but after all it is the HQ and mother-store to whole chain. No wonder then.

The only thing I could complain are the prices. Is not that they are higher than in any the store in Spain, UK or other countries in Western Europe; they are at similar level. The thing is, prices in Poland are lower about 20-30%. I do not complain, but when it comes to prices – I’m spoiled to the bone forever;).

There are plenty of events organised in Goblin Trader. Leagues, tournaments, painting workshops. Most popular games here are not big scale tabletop games like Warhammer. Skirmish are top here. Infinity, especially. No surprise here, since its Spanish game. Beside X-wing is quite taken also. It seems that, if the gameplay is quicker and take not too many hours to play, it pulls more attention.

What I found out, that in this particular store, quite a big emphasis is put on Blood Bowl. The manager of the store is a big fan of BB, and he commit himself to popularize Blood Bowl in Barcelona. Soon, when new edition will come, with a big support from mother GW, his task will be little bit easier. And I think, I may join the league. I haven’t play Blood Bowl since forever, and it could be real fun to back to it.

In the store there is small show case presenting a few painted models on the display. Some of them are for sale. Like these two. Stunning level.

Showcase. Conan on The Throne. 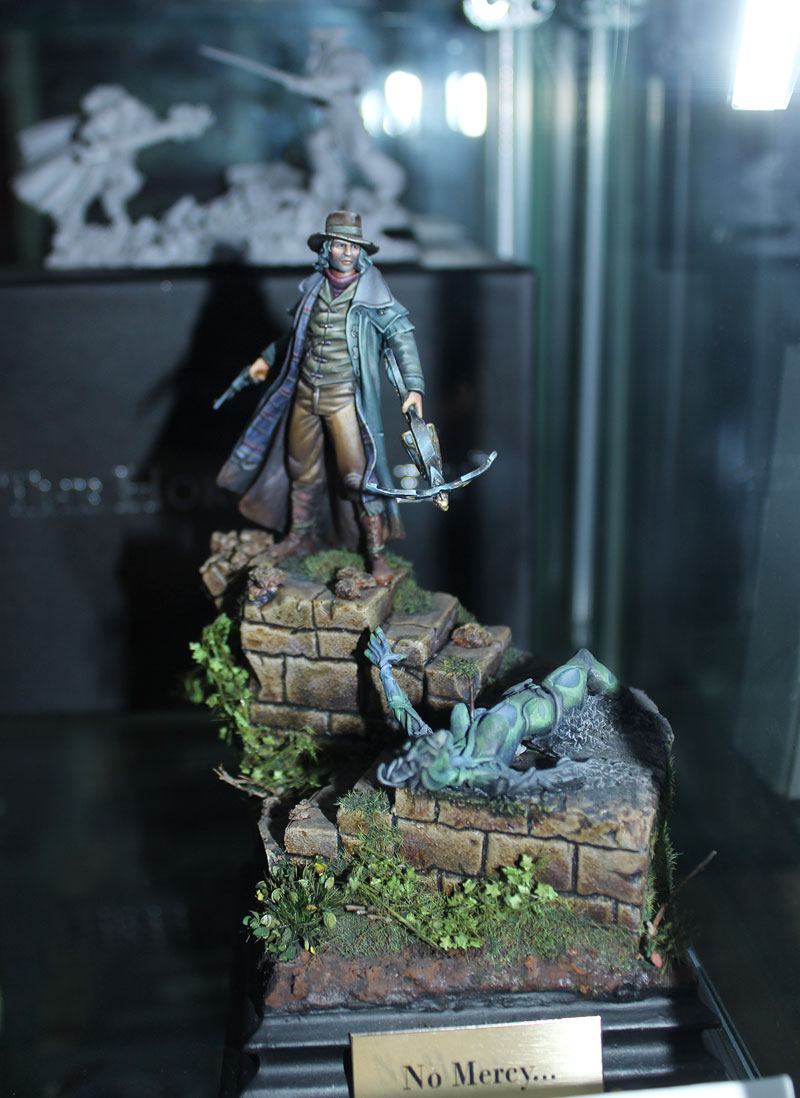 Summarising, Goblin Trader is amazing place. Everything you need in one place. And I’m really happy I move in the area. All this stuff at my arms’ reach. All I need to do is to earn the money to have it spent here. Piece of cake…

I hope someday similar store will be open in Warsaw. The community is big here – now we need large offer store:). Goblin Trader is good example to follow.

And finally, at the end I’d like to thank Miguel, one of the store’s employees for help, patience and answering all my questions. We managed to communicate somehow despite my poor Spanish, and Miguel’s average English. And which is encouraging for me – maybe I’ll fit here despite the differences:)

Miguel and me. Thanks a lot for a tour!

Plans for near future: Next week (Thursday, exactly), I’ll be back to Barcelona from my little Jamaican trip (only 10 days, but totally worth it, despite no wargaming shops around) and then Operation Move Out will enter the final stage. First, renting the flat, then move all our stuff from our friend’s place to our brand new home. And when the dust will settle, I’ll start to set up my new hobby corner, and in no time I’ll be back to painting. Which at the moment I miss the most!

Just give me two weeks and I’m back from the dead!

Meanwhile, in next post, I’m going to take you to Japan!