Usually when someone famous die, I’m not sad. I can’t be. I don’t have any feelings to that person, no personal attachment. What I feel, is some kind of confusion – It makes to ask myself and think: that person is really dead? Wow, I’m getting old – time is really marching on. Dead of Terry Pratchett though has affected me more than usual. He was one of my favourite writers, and I read almost all of his books, and even though I didn’t know  Terry Pratchett personally, I’m lost and confused with my life more than usual.

Terry Pratchett and his work were with me during most of my life. I have read first Discworld series book ‘ Colour of Magic’ in 1994. It was published in parts in Polish magazine ‘Nowa Fantastyka’. I remember, I didn’t like it at first – it was too strange for me. I didn’t accept the style of Terry Pratchett and form of writing he used for the book. Mixture of hard fantasy and traditional British way of humour – I just wasn’t able to digest that. It was too much of everything in one book. But everyone in my surrounding, friend and family, were so enthusiastic about is, so eventually, I gave Discworld the second chance a year or two later and I’m so glad right now I did it. My second try was a big success – ‘Colour of Magic’ took my heart away and the following book  – ‘The Light Fantastic’ I found simply amazing! The story, characters and whole concept – I fell into it. I instantly became fan boy of Discworld. From that moment I just couldn’t wait for the next book of the series to come out, like hundreds of thousands other faithful readers of  Terry Pratchett’s books. Discworld series have this amazing charm, which lures you to this magical world of twisted humour and fantastic adventures. When you start to read it, you are caught. No way out.  It is like a drug. And waiting for the upcoming new book of the series is a struggle. Lucky for all of us, almost every year there was new Discworld book. It was almost certain like death and taxes.

And now Terry Pratchett is dead…

I know, Discworld will be continued. Terry Pratchett’s daughter will probably go on with the series, and they still are going to be fun, but it won’t be the same. Terry Pratchett was the brand name for Discworld. Now, when he is dead – Discworld lost his founder and caretaker. And it’s kind of strange feeling – from that moment something changed in my life. It’s a breaking point. There will be no more Pratchett’s books – only Discworld books written by someone else. Some era has ended.

When few week ago Leonard Nimoy has died. I remember, I got the same – Mr. Spock was  constant, he was always there. And right now – he vanished. He will not perform any more in any upcoming Star Trek movie.

Ok.  Enough whining. Discworld will prevail. New books for sure will be published, and there are already so many of them to get back to and read times and times again.  That is what I like in Terry Pratchett’s books – I could read them over and over again and I still will get tons of joy.

The moment I’m writing this, I was about to end ‘Snuff’ at my Kindle. I need to finally finish this – and get back to more classic books of the series. Maybe ‘The Pyramids’? It is for sure one of my favourite:)

Currently I don’t owe any books of Terry Pratchett. I had but I sold all of my collection of  SF, fantasy and comic books  at the same time I was getting rid of my old miniatures collection. Right now, thanks to Kindle, I can have all the books I want on one device – very convenient, when you are travelling.

I got some other stuff of Discworld though. Back in Poland, three Discworld miniatures from Micro Art Studio are waiting to be painted, hidden in some box, in the attic. I regret I haven’t taken them with me for my American travel. It would me so much fun to paint them at this moment.

What I got is: 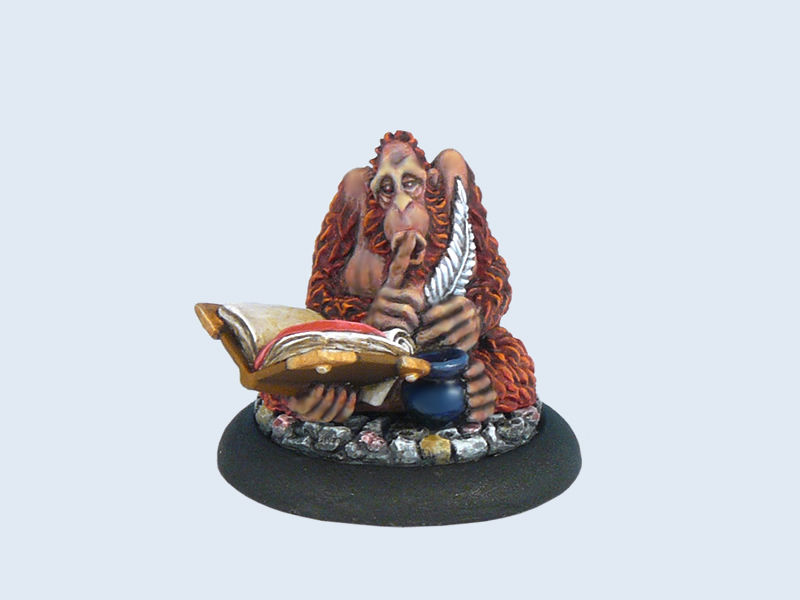 These characters are classic and absolutely must have for me. I really love all range of Discworld miniatures but for Death, Rincewind and Librarian I have especially warm feeling.

The minis look really awesome. Made of high quality metal with lots of details. Micro Art Studio made amazing job here. These miniatures will be probably my first choice for painting when I will be back in Poland. Starting from Rincewind!

If you are interested in buying those minis – you can do it in home page of the manufacturer:

or for example at

As you can see – I have no books, but I still can have lots of fun. I hope some day, there will be nice game system based on those models to play.

And now – let’s face it. Life will go on. Discworld will evolve also, with new stories, new characters. Terry Pratchett made something beautiful and magical and everlasting. His work affected many and that is something I’ll never forget. And for that – books, movies and even those minis I mentioned – I’d like to thank Terry Pratchett. Thank you for all.