About two months ago, we (me and my lovely wife:) bought flight tickets back to Europe. 3th May we are flying to Madrid, and week later back to Poland for next 6 months. When I was looking at the map of Mexico – I’ve arranged our trip like that – Mexico City – Oaxaca – Tuxtla Gutiérrez – Palenque – and finally Cancún (we have the flight from there). It was obvious for me I have to find some shop or wargaming club somewhere on the route. With handy help of  war games hobby map of Mexico: http://heribertohobby.com/mapa-del-hobby-en-mexico/ , I knew I could contact some people to talk, to see some battle or to play hopefully.

According to the hobby map, the only club on the our way to Cancún, was Warhammer 40k Chiapas Club, in Tuxtla Gutiérrez (Chiapas State capital city). So, it was settled, after I got in touch with the guys from the club – we decided to stay for some time in Tuxtla, that I could get some mini action:).

I had very pleasant conversation on Facebook with Victor, one of the members of the club. He offered me some army to borrow, that we together could play the battle. Super cool! We arranged the place and date, and that was it – I was about to play my first Warhammer 40000 game in Mexico. In fact that was my first battle outside Poland. I was super exited!  Victor is playing Chaos Space Marines, and he said we will get for me Blood Angels. Oh, my! At this moment, I KNEW I need to finish quick my Blood Angels Terminator Librarian, to get him fully painted on the tabletop (and I made it, yay: – here it is). 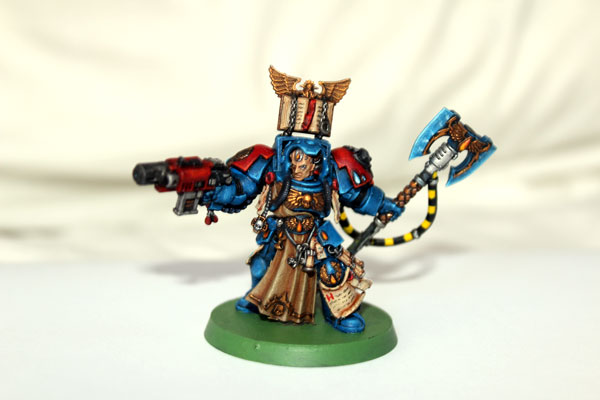 Bother Librarian ready for battle – in this post you can see more photos of him.

I promised myself, because of this kind of special event for, I will write battle report. The first (hopefully of many) on this blog. Eventually, still I haven’t written any, and probably I won’t at this moment, but I’ll let you know about reasons later.

But before I’ll start to write about my meeting , I’ll give some insight about club itself.

Warhammer 40k Chipas Club exists for about 2 years. Right now there are 9 members. You’re probably thinking: it isn’t a lot, but imagine that. Tuxtla Guiterrez is not a big city – and there are no wargaming shops here. Not even one. All minis are ordered online. So these guys organized thissmall group, after one of them brought and showed some minis to the town. The story was kind of like mine – starting from RPG and computer games, my attention was caught by some cool miniatures I saw at some role playing session, and was hooked. I got myself into brand new hobby – gaming and painting. The guys from The Club, got somewhat the same. First RPG, now Warhammer 40k.

The Club has regular weekly meetings (Friday – Saturday) in cafeteria, where they have access to tables and scenery. I was told, they are doing it every week, and there are always some players willing to play. As I said Tuxtla Gutiérrez is not a big city, It’s easy to get from one part of it to the other, so all the gamers have easy way to the cafe.

There was also 10th player with Necrons, but we moved to the other town. So nine left…

I was expecting, the tournaments or campaigns were organized in Tuxtla, but no – only regular weekly meetings.No, sorry… The was only one tournament organized in the city so far, but nothing is planned for the near future. The members of the club, do not participate in many Warhammer 40000 events in other states. The reason is prosaic – too much work and lack of time.

As you can see, it’s a small club, but I just was about to find out – the guys are super friendly and well organized.

I’ve met three of them in last Saturday in the house of Victor (he contacted me, when I announced myself on the Club’s FB page) – Victor, Miguel and Jorge.

Three guys from the club – Jorge, Miguel and Victor.

Victor has nice 5000 points army of Chaos Space Marines, focused mainly on Slaanesh, not entirely painted.Take a look at some of his models: 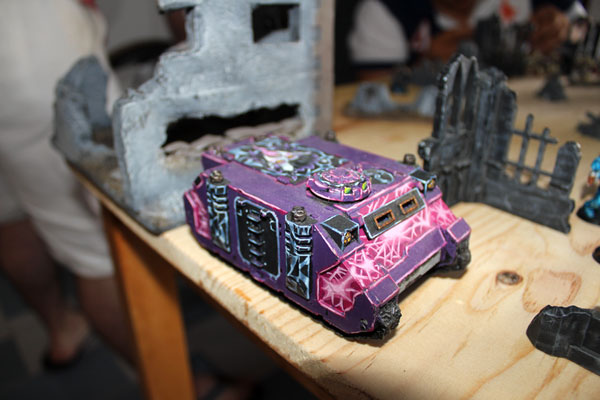 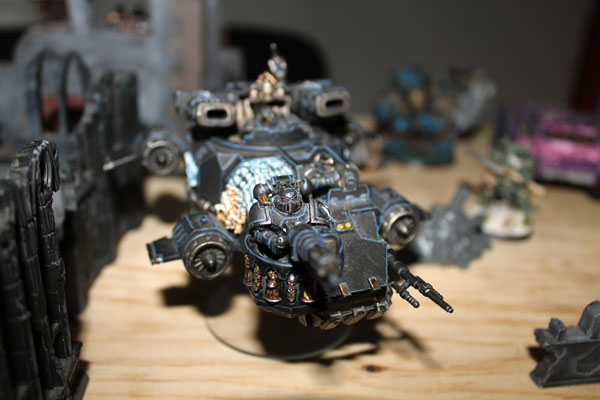 Jorge plays Blood Angels and Miguel – Dark Angels. Here, it’s very similar like in Mexico City (I was in Warhammer 40k there) – gamers prefer to paint for commission, than paint by yourself. Apparently, it’s not that expensive here, so many people prefer this way, in all Mexico. I will never usen to this. When I was starting to collect armies, I did all painting by my own – no matter how shitty I was, I tried and tried, to be better at this. Oh, well, I have to understand people just can’t wait to play Warhammer with painted armies as fast as possible.

Victor arranged small battle (1000 points – almost like skirmish:), between Blood Angles and Chaos/Fallen Angels (which happen to be Dark Angles, but those, you know…bad:). We played on very small table, so that’s why we used small points army lists.

The table we played the battle, were tiny – so we agree on 1000 points.

The scenery was made by Jorge – he is amazing sculptor and he likes to do lots of terrain parts, both for WH40k and WHFB.

Some scenery made by Jorge.

Jorge and I, we stand on Blood Angels side and Victor and Miguel played divided forces of Chaos and Fallen Angels. Each of us had 500 points army lists. There were lots of proxies used (I’m not very fond of this – I’m big fan of WYSWIG, but I was guest here – if they play with proxies here, I don’t mind.).  Because of that, at the photos, you can notice that BA are more like mixture of Ultramarines and Dark Angels.

Anyway, I’ll give you some background of the clash…

Brother Librarian Titus was called along with one squad of terminators and one tactical squad on the second moon of planet Tuxtlus. Support were crucial. Chaos heretics were spotted on the surface by Captain Jorgus of Blood Angels. Brother Titus felt, there will be something tricky about this clash, but he hasn’t predicted, that Chaos will get some unexpected help from small detachment of Fallen Angels. Heretics are always stuck with other heretics, no doubt about that. All it’s need to be done – is to purge the heresy.

Reality sometimes could be deceitful. Blood Angles stood their ground, waiting for heretics to revel themselves. Brother librarian Titus was about to teleport himself with Terminators squad any minute, but forces of Chaos haven’t any intentions to wait. They advanced fiercely. Warp Talons jumped in the heat of battle, led but Chaos Warlord Victor. Right behind them, Fallen Angels Terminators.

Fallen Angels terminators are right behind them. Meanwhile the cultists fire at Blood Angels /no damage was done by that/.

Lucky for Blood Angles all Warp Talons to with Chaos Lord were obliterated /yay!/, but after that slaughter have begun…

Brother Titus and his Terminators entered the battle soon enough to made a salvo at Fallen Angels Terminators. Only one fell.

Brother Titus used his psyker powers, but Blood Lance did no damage. Salvo with storm bolters and assault cannon – and one Fallen Angel sent back to hell where he belongs.

Fallen Angels Lord got really angry and simply cut off to the ground Brother Titus Terminators /Fallen Angels managed to save 5 wounds!/ and after that they finished off rest of poor Blood Angels…Like I said – the slaughter…

Sad they for The Chapter. Brother Titus has fallen… 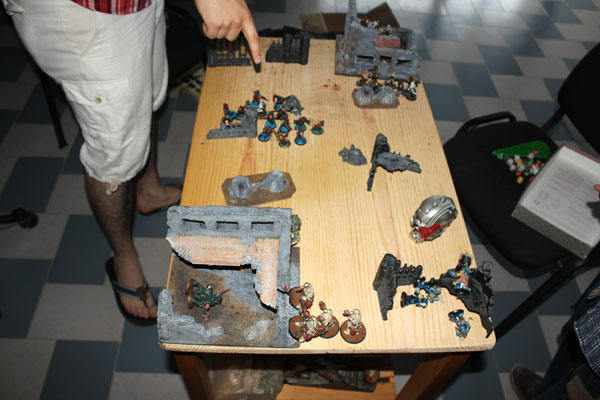 …and the rest of Blood Angles – the clash was over. Heresy has prevailed…

At least Chaos Space Marines were wiped out…

This battle were really quick,  so just to have nice relaxing afternoon of 40k – so I’m not posting proper Battle Report.. Next weekend I’m going to meet the club again and we could play on the much bigger table and bigger points. Better Batrep will be posted hopefully.

In Tuxtla guiterrez, there is also Warhammer Fantasy Club – I didn’t contact them though. Maybe some other time, I will dig deeper and will try to visit them as well. The funny thing is, they are totally different players. These two systems are apart. How strange… (at least for me:).

To contact Warhammer 40k Chiapas Club, please visit their Facebook Page. If you somewhere around, do not hesitate to meet with these guys – I’m sure they will be more then happy to meet and play the game.