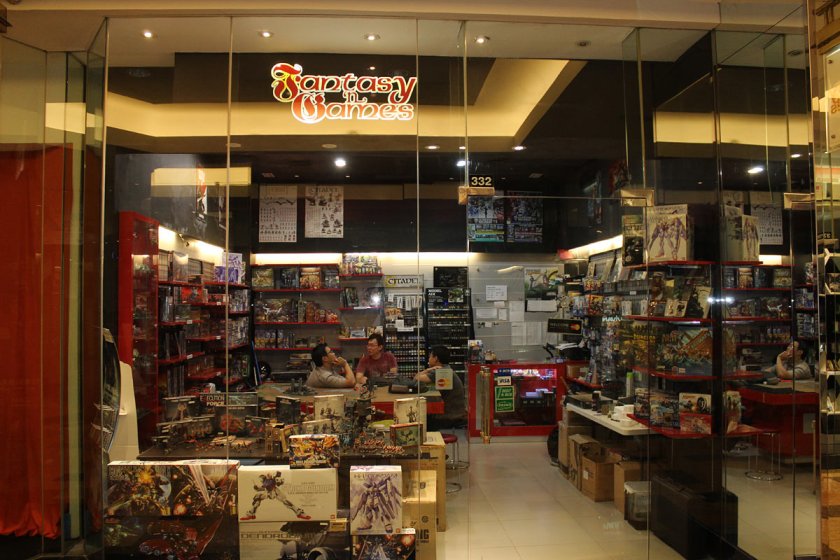 Wow! Time, indeed is passing by so fast! Less than two weeks ago I was in Jakarta celebrating New Year’s Eve. Then – Kuala Lumpur for few Days and Penang, Malaysia and finally today it’s my last day here. 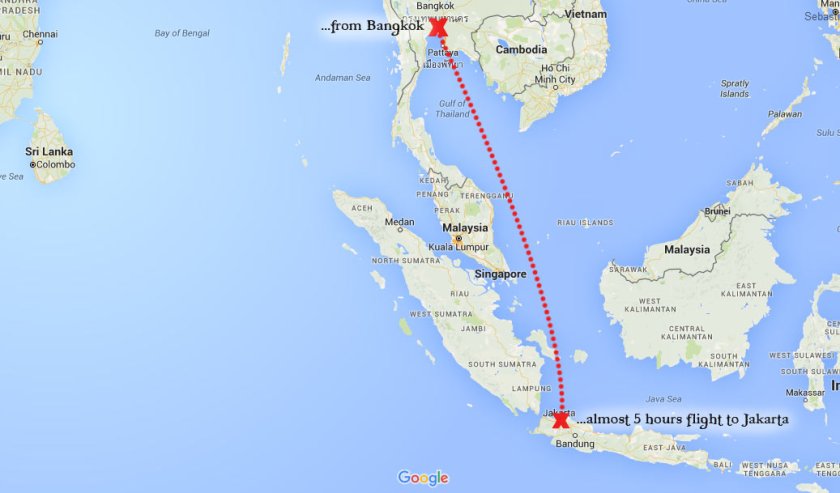 The travel continues – from Bangkok to Jakarta.

I’ve realised, I haven’t done much for this blog and for my hobby in general during past two weeks. I’ve been in so many cool places. I’ve met so many nice gamers in Indonesia and Malaysia so I should have written few posts by now. But I haven’t. And also I’m kind of stuck in the progress on Blood Angles, currently I’m working on…

What the hell, just happened? Of course, I have my excuses, but it’s a weak man’s thing. I should have pulled myself together and go back to work. After all, painting and wargaming is so much fun:).

Luckly, I’ve done all of my ‘day job’ urgent fork and I can spend more time for more pleasant activities. No more excuses. Back to work!

First. I have to finish Blood Angels  this week – it has been too long. Tomorrow, I move to Koh Lanta, Thailand for few weeks. So, as soon as I get there, I’m  going to set up my workstation and end this Red Thirst for now.

And second. I have plenty stuff to write. Time goes by and material starts to pile up. Time to concentrate and catch up the work. Starting from now.

30th December 2015 I was visiting nice store in Jakarta, Indonesia – Fantasy ‘N Games. Cool place located on 3rd floor of Taman Angrekk Mall. I was very lucky that my hotel was about 5 minutes taxi ride from that mall. Jakarta is huge and crowded, I can give you that. One of the most crazy cities I had the pleasure to visit.

I’ve contacted Fantasy ‘N Games about two weeks before my arrival to Jakarta. As usual, I introduced myself and asked about any possibility to play any of the games – no matter if it’s Warhammer 40k or Fantasy. Or maybe Malifaux or Infinity. Well, the response from Fantasy ‘N Games crew were quick and enthusiastic. They offered me help in arranging Warhammer 40k battle. In fact, there were couple of players wishing to play with me. Unfortunately I had only one free day and I couldn’t play with everyone. Eventually, I’ve played with Gerald and his Eldar (the other player was even kind enough to leave some of his Blood Angles at my disposal to complete my army list. Big thank you!) and with my tight schedule I couldn’t find any additional time to play more battles. 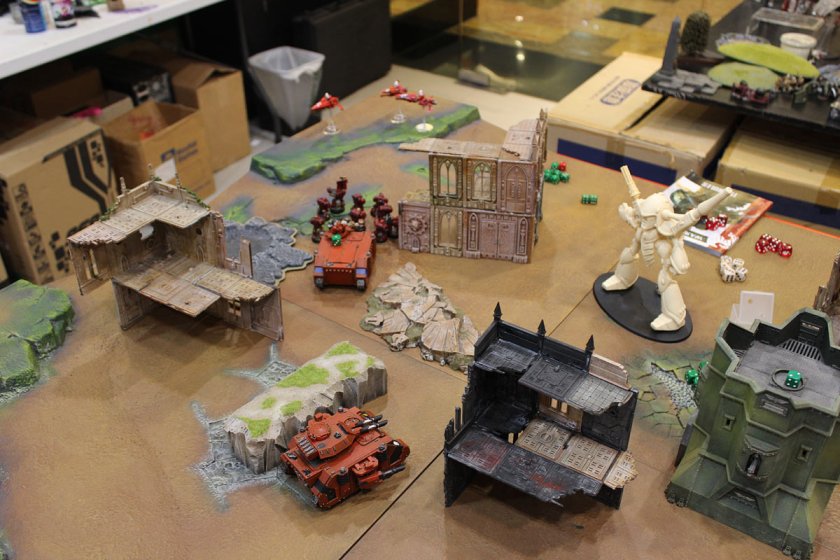 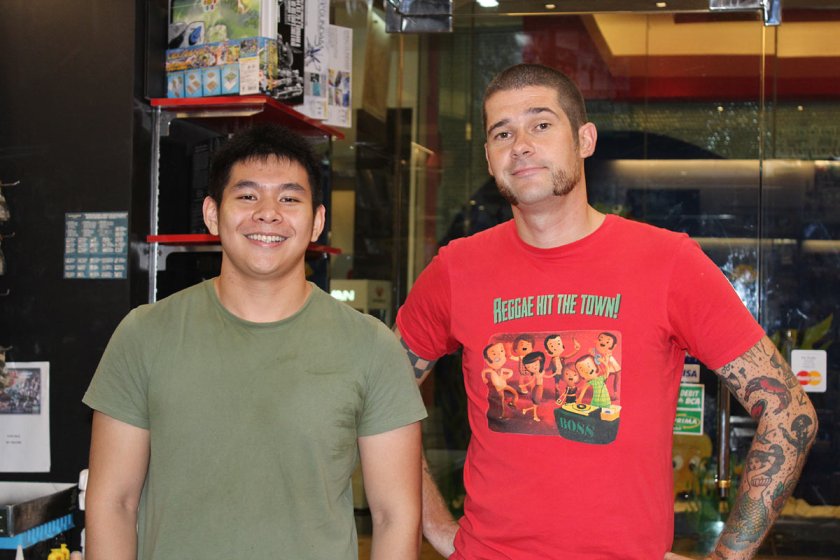 Gerald and me after the battle.

And F’n’G prepared for me plenty of attractions. Ricky (Dark Eldars), another 40k player really wanted to play with me. I’m terrible sorry, Ricky, we couldn’t make it this time. I hope, if I come back in May ( fingers crossed!) we could make some proper 41st Millennium action! Beside that, in Jakarta there are some Malifaux players. I was really exited for possibility of playing Malifaux. However, they were available only for first days of January 2016 and I was about to fly to Kuala Lumpur at 1st January. Bad timing. Hopefully next time.

Also, I’ve met one expat, Richard… who lives in Jakarta for quite some time and he’s devoted Age of Sigmar player. We chatted for some time about Age of Sigmar and – why on earth, my stay in Jakarta lasted only two days!? If only I had more time, I could have played so many cool battles. What a hell, I can even give one more try to Age of Sigmar! Maybe no my cup of tea, but playing any game so far away from home is amazing experience.

Remember folks, if you want to play Warhammer in Jakarta, there are bunch of friendly, open players here. Simply contact Fantasy ‘N Games and they will guide you. Most probably I’ll be in Jakarta in May, so I hope, this time, I will find more time to play Ricky and Chris. For sure, I try to arrange my stay  better:).

About the store itself. Third floor of the mall – small place. Plenty of inventory packed into not very spacious area. However, there is everything gamer should get. Miniatures, paints, accessories plus some board and card games (as addition). There are two tables plus lots of nicely prepared SF and Fantasy scenery pieces. 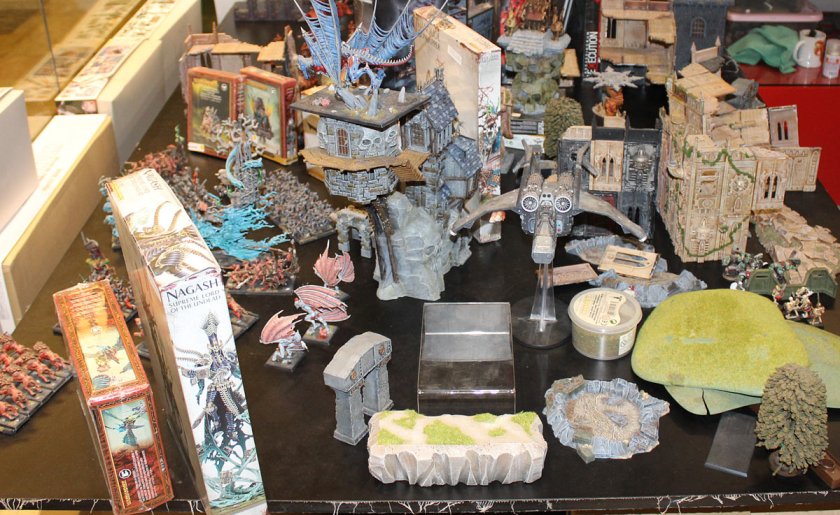 Plenty of terrain pieces to choose from

So, there is the place to play – however, I believe it’s better to make the reservation for the table to be sure nothing and nobody will prevent the battle.

From time to time – tournaments are organised  (Wh40k/AoS). To be honest, I don’t have a clue how organisers manage to fit players in so small space and arrange the tournament on one/two tables. I would love to see that!

The offer: usual – Warhammer 40k as the primary product and Warhammer Fantasy/Age of  Sigmar as secondary. No other games are offered. The prices are reasonable, so I bought Space Marine Captain as souvenir.

As cool addition, Fantasy ‘N Games still have in their offer some leftovers from previous editions both Wh40k and WHFB. End Times books (I would love to buy Thanquol or Glotkin – or better both, but there is no space in my backpack for such tomes:) and plenty of old metal minis blisters. All discounted! I got old metal model of Empire Engineer straight from 6th edition (I think) with 40% discount. Cool! 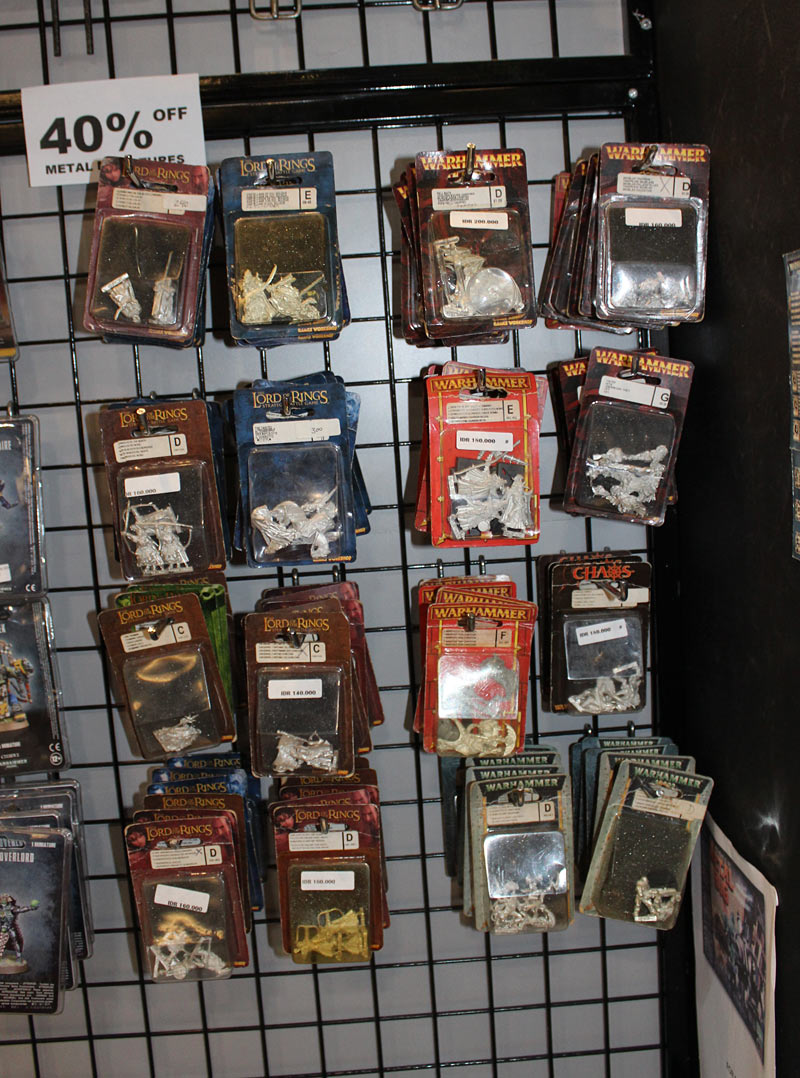 Some old stuff to sell

Last thing: models showcase. There are lots of nicely painted minis on display.

The paint job is really top notch crazy level. It’s the work of Gerard Walter, Indonesian commission artist. Take a look at his minis on his Instagram. 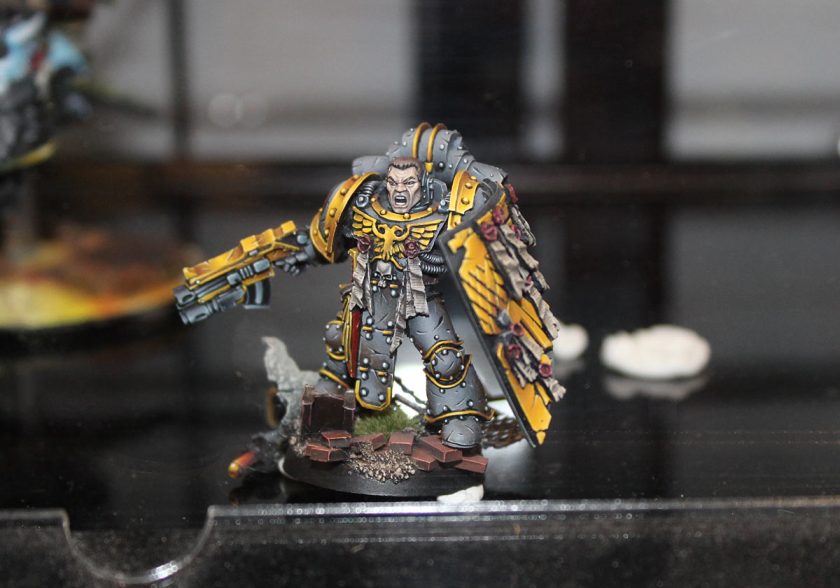 The painting skill level I’d dream to achieve someday somehow:). Few of The Eldar Jetbikes of Gerald, my opponent in the battle I had – was painted also by Gerard. Wow, I can tell!

Eldar Jetbike by Gerard. Playing against such lovely models were pure plasure!

Well, that was short, but fruitful visit – I’ve restocked some paints, bought myself souvenirs and had great battle (report soon!). F’n G – thank you so much for your hospitality and hopefully see you again in May 2016!

What’s next: Like I mentioned at the beginning – I want to finish Blood Angels I seem to work over for ages and catch up with more writing material I have – report from battle of Warhammer 40000 (Blood Angles vs Eldars) from Jakarta. And visits in Kuala Lumpur and Penang. Tomorrow I’m heading back to Thailand and two weeks. And after that – Philippines. Stay tuned!