Few days ago I’ve managed to finish Terminators Squad for my growing Blood Angels army. It took me some time to finish those, but it was quite satisfying work. Terminators are super cool models  and it was really fun to put colours on them.

Probably, the whole Terminators project did not occupy me for so much time, If I won’t work simultaneously on other Blood Angels. Tactical Squad.

All together – all 15 miniatures – took me almost a month to paint them all. After all this time – they are finally done. It was the matter of perseverance, I guess. I painted few hours a day (if that was possible of course). I used every spare moment, all my free time to paint these minis.  And here they are.

Of course, I could have concentrated even more. One month for even 15 models is way too long. The next batch of Space Marines (definitely not in near future), I hope will not be that time consuming. If I could short it to two weeks – it would be reasonable.

…but for now, there won’t any more Space Marines on my workshop. Not for at least few weeks. I plan to concentrate on other projects, and other Warhammer models.

Blood Angels. One of my favourite chapters of Space Marines. I started them during the time of 2nd edition, and now I’m back to them after all those years. Why is that? Why Blood Angels? Don’t even know the answer:) Red is for sure one of my colours – so that was one of the reasons. Probably. Or maybe there were other reasons. Don’t remember – the truth is – in 1990s I had limited options for starting the army. Blood Angles were one of the available codex (to be exact: Angels of Death codex) at the time I wanted to start Wh40k. And I ended up with Blood Angels.

No regrets though. Cool models, cool  colour scheme, cool army composition and cool tactics. I like the whole package:).

The tactical squad I’ve just painted will be first of two I plan for my 2000 points army. I just need to paint one of two rhinos for them (plus Stormraven as the alternative) and my troops will be ready.

I was preparing the squad right before my departure to Australia/Asia. I’ve assembled and glued them and I’ve hoped I will also magnetise all weapons options. Unfortunately, time was passing by and all of the sudden there was one week left to my departure. I’ve planned few hours to magnetise the squad, but after drilling I’ve realised my magnets are to big! For Space Marines arms I need 1 mm magnets and I had only 2 mm. What a bugger.

After drilling heavy weapon marine’s arm, it was in shreds. I had no other choice, than glue it permanently and I’m sorry to say this, because of damaged right arm, I was forced to add some green Stuff. And even this did not help the model – heavy bolter is glued so poorly, that you can easily see all my assembly flaws. One big mess. Well, the first pancake is always spoiled…

As for special weapon – I left it unglued for now – as soon as I get back home –  I still plan to magnetise this one. Heavy weapon is unfortunately lost.. 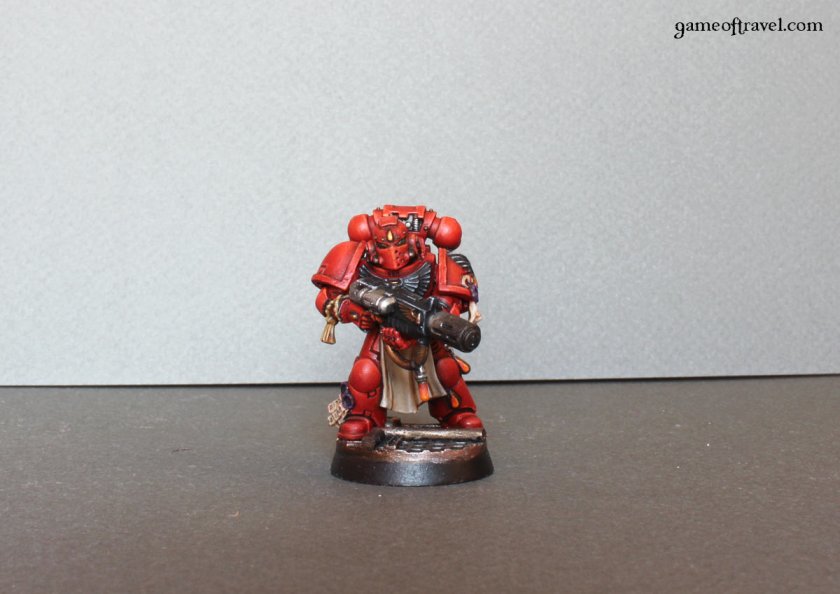 Other issue. Space Marine sergeant. By mistake I used all possible arm options for his left arm for other marines in the squad. And, well, I messed up. There were no arm left for power or chain sword. And since I did haven’t got proper magnets – I’ve decide to use power fist and glue it permanently. In other hand – storm bolter.

My second Tactical squad will be properly magnetised. All special, heavy weapons and sergeant – most definitely.

And as in Terminators’ case I had my issues with lettering on banners. I’m mediocre at this. Really, I hate to this. It’s too much pleasure for me. All letters should be even, font should be fancy (Imperial Gothic preferably:). And what I offer instead? My shaky hands and poor brush control with absolutely no typewriting skills. Ha:) Effects, you can see on the pictures. Hopefully, I’ll be better at this with every banner made. Some day, I’m going to master this. 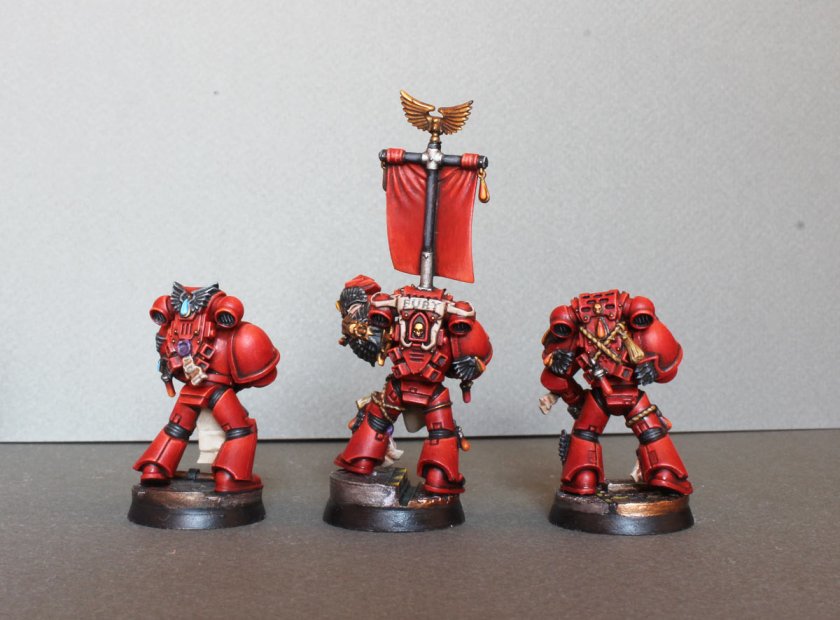 So, here they are – my Blood Angles. Tactical Squad, Terminators and Sanguinary Priest. All Space Marines models I’ve taken with me to Asia are done. Back home, I have Librarian in Terminator Armour (I don’t count unpainted miniatures). And when I was in Kuala Lumpur, I’ve purchased one of the Games Workshop’s latest releases – Blood Angels Chaplain with Jump Pack. Super awesome model (I’ll paint it very, very soon).

So far, my small travelling detachment participated in few battles I’ve fought on the road.

In Singapore – vs Raven Guard.

In Bangkok – vs Chaos Space Marines.

In Jakarta – vs Eldar.

…and finally in Kuala Lumpur – vs Space Marines.

I had plenty of fun (Especially first battle). For now, I don’t have any new battles scheduled in the future. Not, in about one month, I won’t.

What I found out, Warhammer 40000, as most popular worldwide, is the easiest game to find the players  and arrange battle anywhere I’ve travelled. Cheers to all fellow gamers out there, who I had the pleasure to play with and who helped me with all the fuss of playing battles away. Big up to all of you!

Plans for the future: Next Wednesday I’m heading to Philippines. For the last two days in Thailand I’ll be working on Zero for Nomads, Infinity. If it all will go well – maybe I’ll start to paint something more. Let’s say Pandora for Neverborn, Malifaux. It sounds tempting…