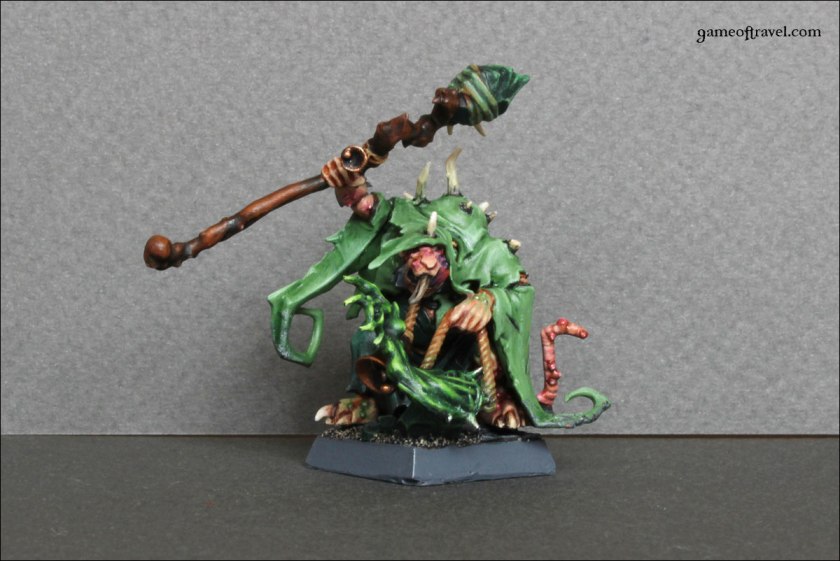 Oh, that was precious time in Thailand. Well, in Asia in general. I had huge doze of fun here and for sure I’m going to miss whole region – my favourite Malaysia, but also other countries. I plan to get back here, not in near future, but probably in about 2 years I want to visit this area again. Right now – destination Warsaw, Poland and I’m going to settle down there for few months. Exactly like one year before, when I got back from Central America.

…but for now, I’m still in Thailand. Last 5 days. And I have few miniatures already painted, photographed and ready to be presented here. First mini from this new batch, is Skaven Plague Priest for Warhammer Fantasy Battle (how to tell a difference between WHFB and Age of Sigmar these days? It’s simple – if the base is squared – it’s WHFB, and if it’s round – it’s AoS ;P ).

The model comes from the plastic kit Screaming Bell/Plague Furnace, that provides two assembling options. I’ve decided to build Screaming Bell and Grey Seer riding on it, so I had spare model of Plague Priest that supposed to ride Plague Furnace and I could base him as infantry model to be perfect addition for my new Clan Pestilens army.

I want to build Skaven army that are free of any other Clans nonsense – no machines, no assassins, no mutated creatures. Just pure disease spreading horde of awesomeness. Led by Lord Skrolk, accompanied by two Plague Priests and filled mostly of Plague Monks and Clanrats faithful to Pestilens. Plus some puny Slaves, obviously. It will be awesome – of course I need some time to paint all necessary models. I hope to achieve the goal in no more than one year. In any time between I plan to field mixture of Clan Pestilens and other Clans – Skryre or Eshin. Whatever necessary. Temporary solution. 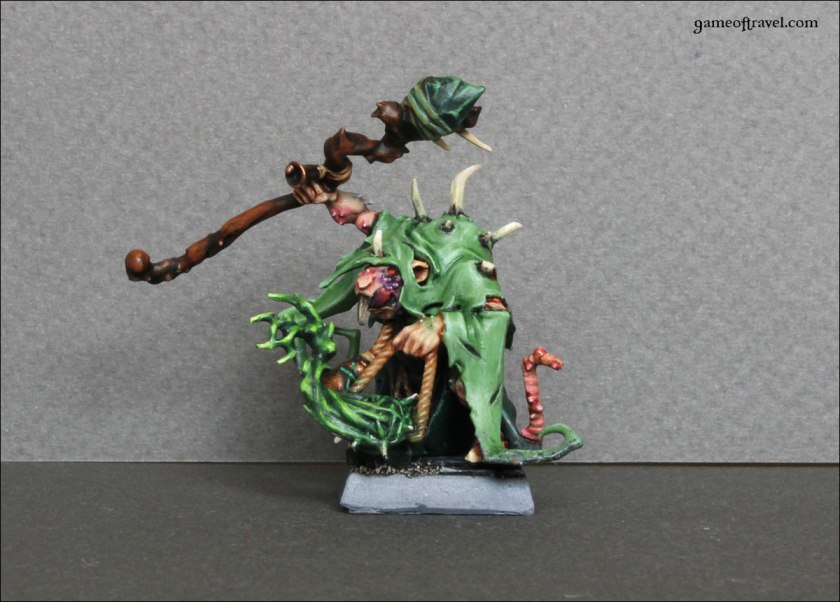 …and this Plague Priest will be one of two heroes of Pestilens in this army. (The other one is this 6th edition model). Anyway, the model  from the Furnace is a lovely sculpt.

Several layers of old piece of cloth. In one hand staff  with big piece of Warpstone on top, and in other Plague Censer( In my opinion,  he can be easily choose as two hand weapons option). Skin lesions full of ulceration and crazy eyes. Wicked, ass-kinking model if you ask me. And it does not bothers me at all that this is probable the most common Plague Priest model available recently. I still love it! 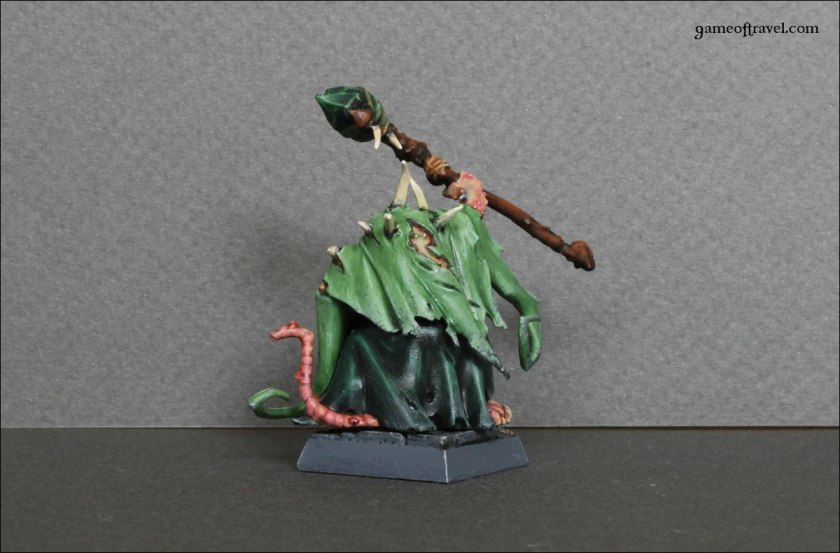 Painting this model was quite easy, but time consuming. I wanted, first of all that ulcers will not have the same colour. After all there are several shades of plague. Mephiston Red, Warboss Green an  Xereus Purple – I used these:). To blend I mixed these colours in different proportions with Kislev Flesh, which was base for the skin. 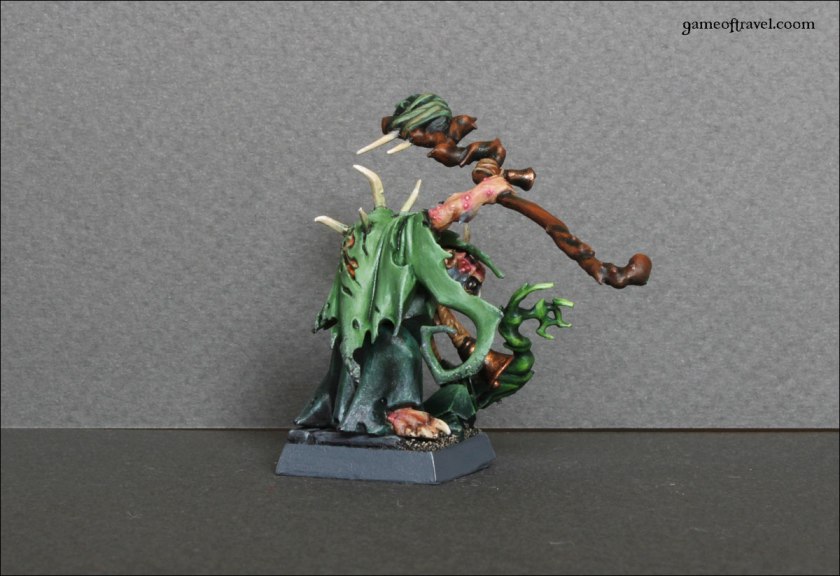 For the first time, I tried different technique for Skaven tail. Usually I was using the same tone as the skin, but how ignorant I was! Everybody knows that rats’ tails are little bit more pink than rest of the skin!   So, this time I painted it like it should be. As base I used 50/50 mixture of Kislev Flesh and Screamer Pink washed with Seraphim Sepia and Nuln Oil. What do you think? Does it look more verminous?

Another thing that put more time into, is Plague Censer. I put on it several layer of different tones of green. Starting form Caliban Green, I added Warboss Green and Moot Green plus on very top Warpstone Glow. I added several layers of watered Biel-Tan Green, plus highlighting whole thing by adding drops of white paint to green. Metal parts of Censer I covered slightly also with shade of green and wash, to make it look like fumes covered the globe.

Base is taken from the offer of Fantascape and it’s called Wyrodstne Mines. Change the word ‘Wyrd’ for ‘Warp’ and you will get the idea why my Skaven are based in such way.

Ok. And another Plague Priest is finished. In next part of  “How I paint my Pestilens Clan” I’m planning to show you awesomeness of 5th edition metal Plague Monks. Hard to say though when it’s going to happen.

Plans for the future: In next few days I’m going to post more entries about my recent work, but after that there is possibility I won’t post much content here. All the fuss connected with moving to a new place probably will get my fully attention. There won’t be any time left for miniatures and games. And definitely not for this blog… So, I need to ask you for patience – I’ll be back soon with more power, new ideas and new topics!