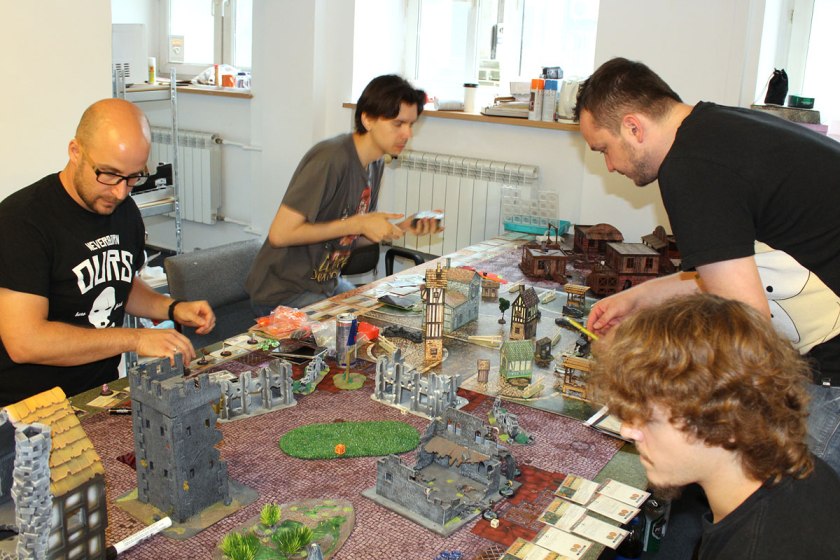 I’m not exactly tournament guy. Too much pressure mixed with so called ‘power gamer’ attitude – definitely not for me I used to think,something like that.

Some time ago, by accident in one of the local hobby stores I bumped on Polish Malifaux Henchman – Rafał. He asked me if I will come to the tournament he organizes. Well, obviously, my answer was  – no. First, I’m still rookie in Malifaux and second, tournaments are not my cup of tea.

Well, I always admired men with such charisma, that they are not need to make a big of speecch to convince someone to act. Rafał, apparently is the guy, cause in few sentences he realised me that this tournament will be great idea to participate.

Advantages – three games during one day. I’m rookie allright. And I will probably loose all three, but I’ll learn my lesson and gain the experience. Therefore, I will become better player.

Actually I needed that – I’m in that stage: I get Malifaux rules, but to fully understand all the little things, nuances – for that you need to play more. So, three games in one day. Sounds perfect.

And what about tournament attitude of the players?

Rafał convinced me, that during this tournament – there’s no such thing as power gaming. The atmosphere is friendly and uplifting for newcomers. In fact, there will be many of nobs like me. Ideal situation.

So, despite my doubts, I joined the event and today I give my insight story from Hunt for The Soulstone tournament that took place in Warsaw Gentlemen’s Club in July this year (I told you stories started to pile up;).

15 players joined the event, and each of them were played 3 games. Strategies and schemes were revealed right before the games.

I have painted only two Masters for my Neverborn crew – Lilith and Pandora. As completely newbie, I decided to proceed with Lilith. I played  a few games with her, and it seemed to be good idea to gain more experience with her. And beside that, she is relatively easy to run.

…vs Ramos and his men.

My first game was against Arcanists and Ramos. Little bit nervous, since I did not part in any tournament for ages (with exception of Wolsung Weekend campaign:). I didn’t know any of my opponents and absolutely had no clue, what level of so called ‘power gaming’ I can expect here. Flexing muscles and showing off, and let’s face it – sometimes tournament games pull off the worst from many people. Thankfully, my concerns were unjustified – it was exactly like Rafał told. Every of my three games were played in friendly atmosphere, and all the gaps in my rules comprehension were treated with understanding.

To be honest I’m still playing Malifaux at the totally training level. Exploring new ideas and approaches. And during that game, even though I was sticking to Lilith, I chose different models (like freshly painted Teddy) and upgrades. I didn’t follow any particular tactics. By choosing Convict Labour scheme, I gave a shot to my precious Terror Tots (I learnt from my previous games how fast and effective they are, when it comes to putting scheme markers). The second scheme  – Frame for Murder determined Barbaros to be sacrificed for greater purpose.

I never played against Ramos. And soon I was about to find out how annoying he could be with his self-detonating Steam Arachnids appearing out of nowhere.

I managed to gain full points for completing Convict Labour. Barbaros was also killed in action and he gave me VPs. Unfortunately rest of my crew were overswarmed by lots, and lots of constructs.

Convict Labour markers set up. Nothing suggested upcoming defeat…no yet…

Despite almost all of my models were killed at the end of the game, it was only a minor defeat. I managed somehow to Guard two of The Stashes for most of the confrontation. Tight game. Very tight.

…and Candy guarded the Stash to the very end… but eventually I lost anyway.

What I learned is to think more strategically. Think of the plan for the game and stick to it. This is the only way to outsmart the enemy. The importance of luck in Malifaux, comparing to other tabletop games I was played, is rather minimised.

The fate put me against Kirai Ankoku and The Resurrectionists. 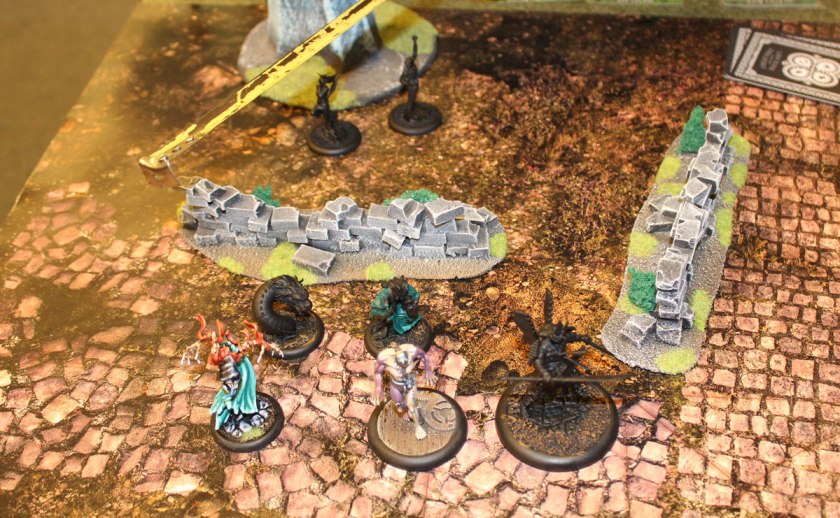 Kirai and her crew…

Both crews ready to deploy.

Another defeat. This time I learned hard way, how Kirai works. She simply summoned a few Hanged spirits who happened to be pretty deadly to Mature Nephilim or Teddy. Poor Teddy couldn’t regenerate wounds inflicted by The Hanged.

…and then – The Hanged started to appear…

…and my crew started to disappear. First to go was Mature Nephilim.

Terror Tots once again completed Convict Labour scheme (and I’m starting to be encouraged what these little guys can do), and Barbaros once again proved himself as valued member of Neverborn. He sneaked around to get to the Resurrectionists deployment zone and gained full VPs for Undercover Entourage. Good lad. 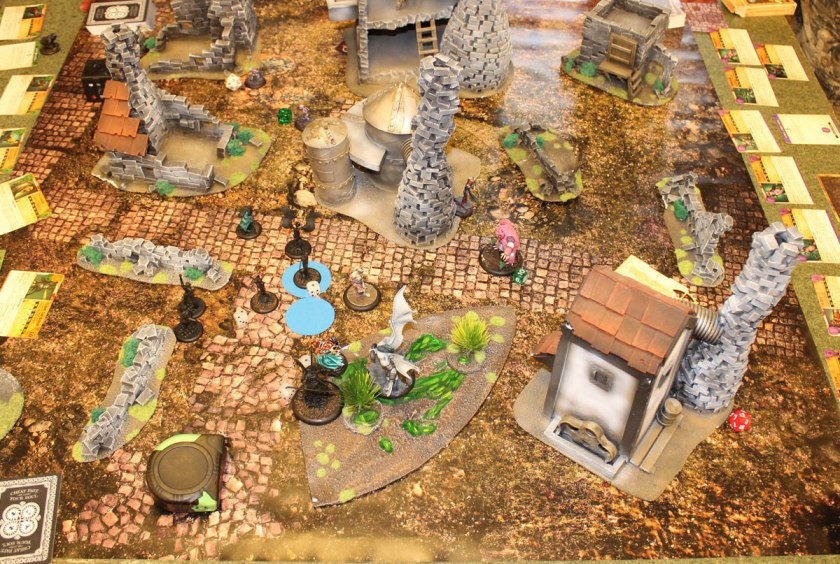 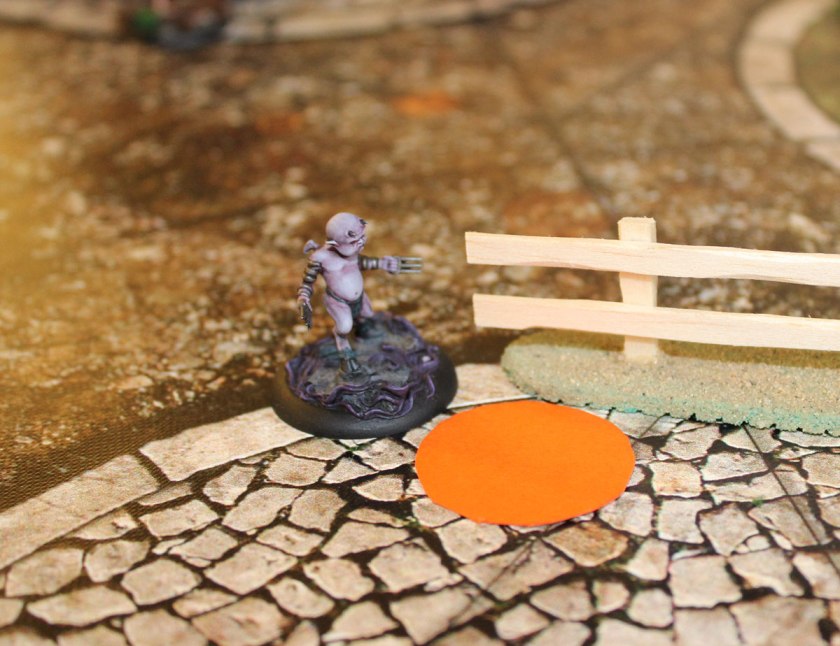 Unfortunately I got no VPs from Headhunter strategy. The Hanged put most of my striking force into the pits of hell and I couldn’t make any serious impact in the main confrontation.

At least I learned Karei/Hanged combo is a serious threat to big, scary Enforcers…

And finally – game three. One more time Arcanists, but this time lead by Colette du Bois. 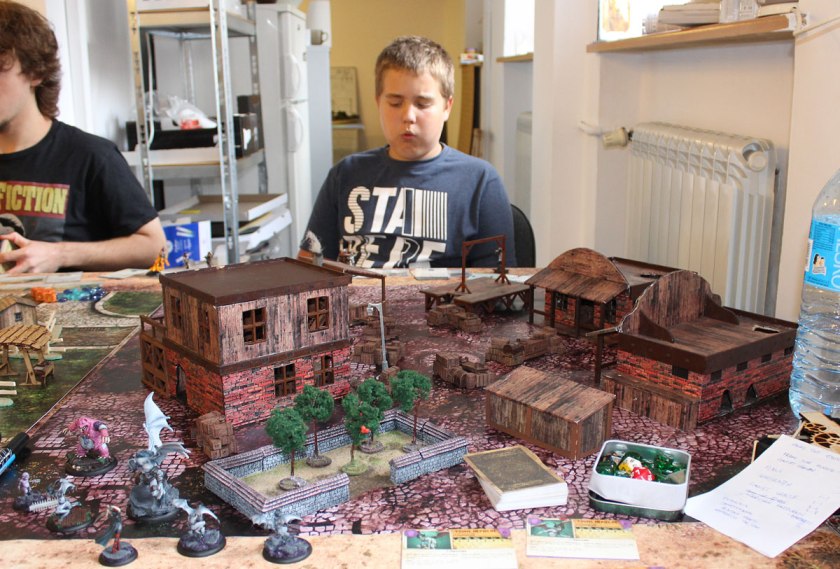 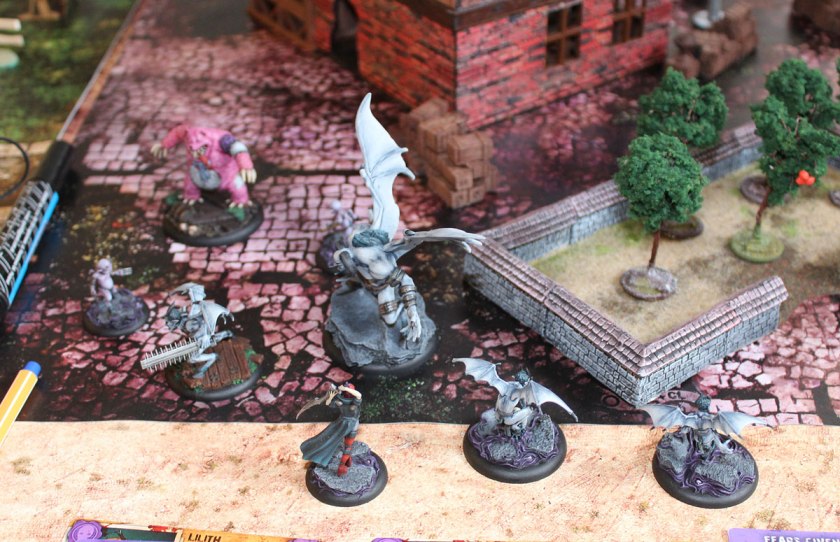 I have to apologize for lack of photos from this game, but the battery in my camera went dead. Shame on me. I didn’t check the power  before the tournament. Serious clumsiness of me. Sorry for that.

This time, I tried to implement some kind of strategy. I chose for the game as many Black Bood creatures I had in my case. The idea was to hit my opponent with everything I have. Surrounded by bleeding Nephilims, his models will got additional wounds. That’s why I also choose pretty straight forward schemes – Hunting Party and Neutralize The Leader.

My tactics were working only half-way. When my Nephilims entered into close combat, they started quite a mayhem, but soon I started to loose the grip. Gosh! Some of my opponent’s peons died due to the Blook Blood, but since they weren’t killed by my Henchmen nor Enforcer – I gained no VPs…

There was also a slight chance to kill Colette. Lilith ran trough all the lines and hit her hard… but first of all – the cards were horrible for me at the turn she charged, and second, and most important matter…Colette is super hard to kill thanks to Now You See Me… ability. When Lilith was about to deal the final, mortal blow… Colette simply disappeared! Vanished into thin air! True show girl she is. And honestly, that saved her life. And I got no VPs.

While I concentrate my efforts on trying my Nephlim tactics, my opponent slowly was pushing Informant Marker from Extraction Strategy onto his half of the battlefield. And eventually he got all VPs. Well, it happens – I was more concentrate on trial/error my approach than winning this game and the result could be only one – another defeat:).

Malifaux. Three more games and I still don’t see myself at position to comprehend the rules and the proper level to win… But wait, why so gloom?! I made to be 14 on 15 players, so I was not the worst after all:)

…which is actually good, I presume. Malifaux is serious brain teaser for me. All these combos, connections between particular models make me want to think more. And find new ways be better at this. Some day, some day…

I think I’ll play around 8-10 games with Lilith. Of course, I will continue to paint more Neverborn for Lilith (unfortunately I had very little time to paint recently at all, not to mention Malifaux), so I can build different crews with various members. And after that, no matter what – even if I loose most of these games (hopefully not), I’m going to change the Master.

Summarising: The whole tournament, despite my three loses, was great deal of Malifaux experience for me. It was exactly like Rafał said, trying to pull me in. The event will give me more, than regular games. One day, three games, and plenty of gamers around to ask, discuss and gossip;).

… and despite the fact I don’t have too much time to play Malifaux to break this defeat streak, I don’t plan to abandon the game. The models and the fluff is way too cool for that.

…aaah, and by the way. The very same day in the far corner of Gentlemen’s Club basement, Warhammer 40000 players were in the middle of Apocalypse game. The day two of something like 40k points battle. Chaos Space Marines defending their positions in the fortress against forces of the Imperium. It looked so epic! Someday, when my Blood Angles will be ready (working on that:), I have to try this. 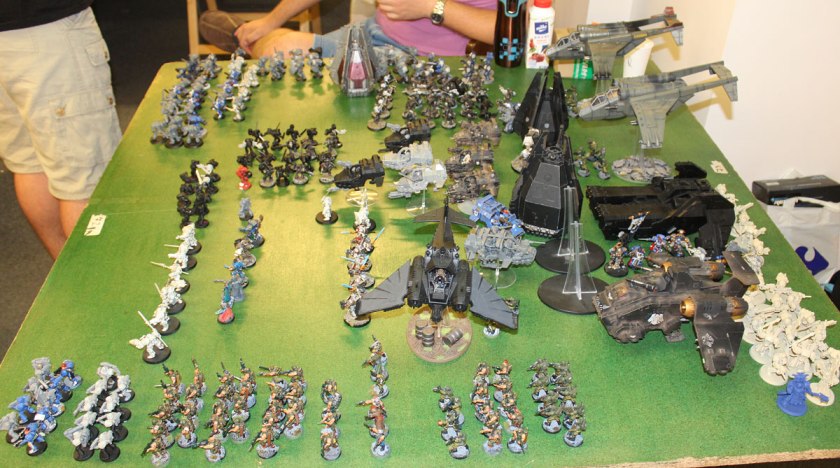 …and some of the attackers in reserves.

Plans: Everything is so slow recently in my hobby life. No time for games, painting and writing… The reason for that is simple. There are big changes in my life at the moment. Right now, I’m in Negril, Jamaica and I’m going to stay here until 3rd November. And right after that, I will put myself into a big fuss called ‘moving out’ to another country. Poland to Spain. Uff, that was quite a challenge, to fill the back of my car with most necessary things and drive all the way (2500 km) to Barcelona. That will be my new home for the next couple of years.

Hopefully, soon I’ll rent some nice flat and all the commotion will settle down and I would gladly be back to my normal hobby routine. Play from time to time, and daily painting and writing. Fingers crossed!