In my last post I presented the miniatures I painted for my Malifaux Neverborn band – Nephilims. Mature one and two younger. These three miniatures were planned to complete the base of my Neverborn faction. It was kind of the race against the clock for me. I bought the first Malifaux box set in August (Lilith – Mother of Monsters) and I wanted to to paint enough miniatures to play tutorial game before 21st October (my departure date).

At first I thought it’s enough time to paint the minis from the box and even few more. So, I added Waldgeists and Nephilims to my painting schedule. It all seemed to be manageable and possible to combine with my other painting projects at the same time. However, as usual, everything got little messed up – I was late with everything.

I had plans to play two tutorial games before my departure. First, Infinity and second – Malifaux.  Due to failure of my time table, I was forced to abandon my plans about Infinity. No way I could finish miniatures to play the game – I was able to paint only 4 of them – still need at least 5 to play proper game. No worries – I’ll finish them while I’ll be in Asia. But the game was off.

And as soon I realised that there will be no way, that I could not handle two projects at the same time – I concentrated my efforts on Malifaux models. I arranged the tutorial game with my friend Sławek for beginning of October and I rushed to my painting station to finish all my planned models.

And finally, this week Tuesday I got my tutorial at Malifaux. I bought rulebook along with Malifaux miniatures in August and I studied the rules carefully. Of course I got the idea more or less what is all about, but without proper practical lesson, I couldn’t comprehend all what Malifaux has to offer…

For Tuesday I prepared following miniatures (according to plan):

My Malifaux Neverborn band. Lilith The Mother of Monsters.

I supposed to paint them all. Unfortunately I was late with Nephilims. I managed to put the base colours and paint details, but they were still to be toned up. At least they were good enough to put them on tabletop.  Later this week I finished them and started to pretend this situation never happened;). In this post you can see their photos. Beside Nephilims, everything else was fully painted and ready.

I was about to face Ten Thunders. I did not get any clue what to expect. I did not know any rules and stats. Well, I had no intentions to even bother to check it out. Fun – it was my only goal. Fun and learn – this is what I wanted.

After short introduction to the rules, we decided to play 25 Soulstones game. Easy game to pick up the game schematics. No masters (sorry, Lilith:), Henchmen as leaders. For me, the choice was obvious – Barbaros is the only painted Henchman I have, so the only thing I needed to decide is who is going to accompany him… I picked:

Mature Nelphilim and two young ones. They gave me, along with the leader – Barbaros, nice mono themed band to play. I love such compositions – they look the best on tabletop. Sometimes they do not act as good as they look during the game, but it’s no the point. I need a lesson, I need to give Malifaux the try. So, Barbaros and his band will receive this lesson. Bring it on!

Barbaros and Nephilims are ready!

My opponent, Sławek took – Ototo (as leader), Yamaziko and three Torakage. As a total newbie, I had no idea who exactly I’m dealing with, but honestly my plan first of all to learn the game schematics – not to win at all cost.

Ten Thunders, Ototo and his band.

Schemes and strategy we have drawn. 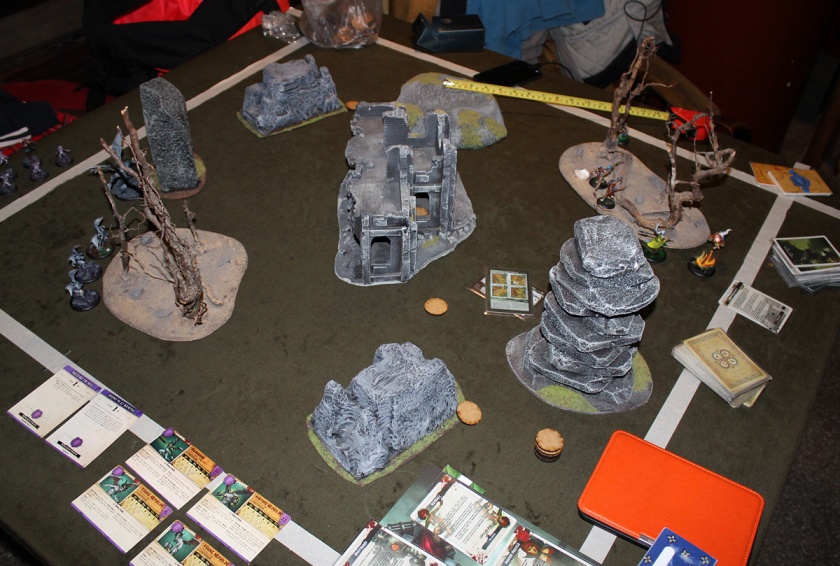 Tabletop set up. My Neverborn started on left corner, and Ten Thunders on the right. Markers were in the middle.

Generally, the game was all about markers. Both of us quickly rushed to take over the markers. Unfortunately for me Ten Thunders were faster and I was forced to fight for them. I am absolute noob – and I was not aware that Distract scheme has such powerful potential. Basicly, my models couldn’t do anything – Ten Thunders were distracting all the time and I all my Nephilims could only spend all their available actions to get rid off the distraction effect. But it costs 2 Action points! 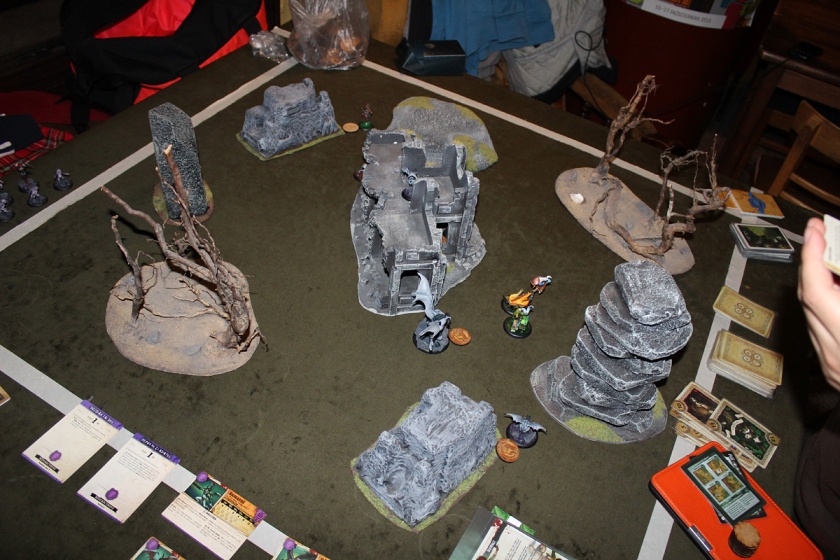 Damn, no AP left to engage in combat or interact with markers. And Ten Thunders had one model more then me  – so they could distract me and still one model left to do other actions than distract. 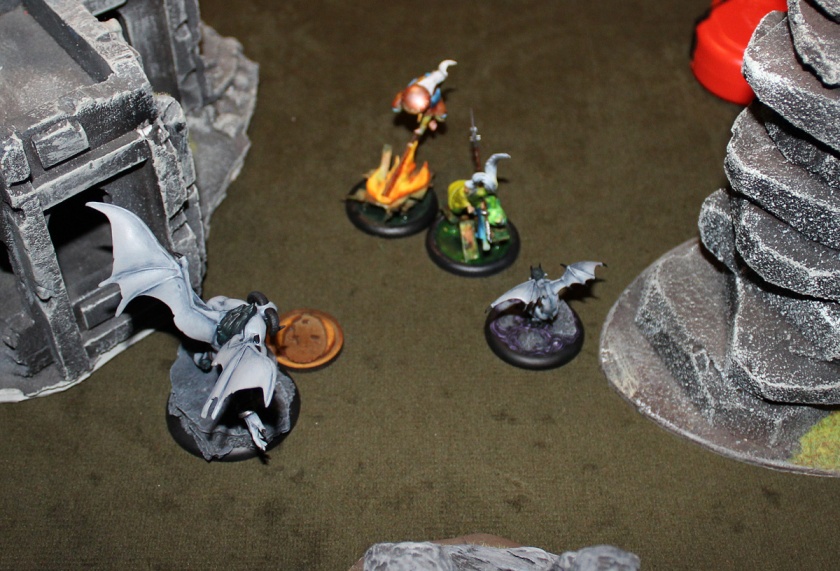 Mature Nephilim vs Ototo and Yamaziko…

…and he failed to kill them. Instead, they killed him…:(

Suffice to say, I lost. I was able to take control over two markers. I even badly wounded two of Torakage, but I failed to kill any of Ten Thunders, not even mentioning to kill the leader  – Ototo. One of my Young Nephilims and Big Boy Nephilim were killed. Ototo and Yamaziko melee range of 3 inches is annoying. They could fight and my Nephilims could not fight back. What a bugger…

I don’t remember the final score. It was something like 8-3 to Ten Thunders, but it could be more. I did not care about the win or lost – I wanted to learn the rules and so I did. Sławek I owe you a beer or two:) Before the game when I was reading the rulebook or studying characters card – I was only thinking I understand the rules. Well, not exactly – in my understanding the rulebook is not written properly to easily comprehend the knowledge. I thought I get the idea, but during the gameplay it all started to be blurry. Sławek is patient teacher and he explained me all my doubts. Right now – when I read the abilities on stat card I understand all of it or at least 90% of it. Soon, I’ll become Malifaux champion! (well, we will see about that;).

What can I say? Malifaux is great! Generally I try not to judge game by its rules and concentrate on miniatures. If models are appealing to me, then I buy some to paint and eventually I want to give the game a try. I heard many positive comments about Malifaux all across internet and from my close friends. And right now I can confirm that – I love Malifaux and I will concentrate my gaming efforts on it in the near future. 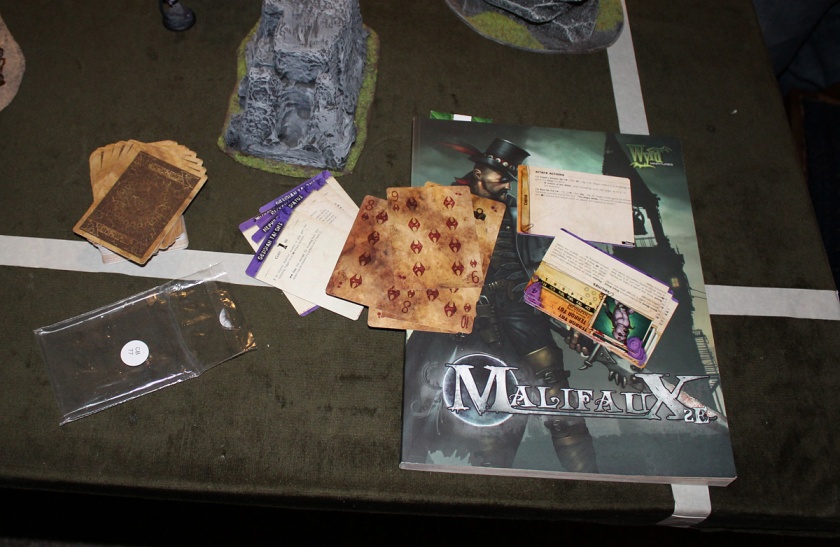 Rulebook and deck of cards…plus models and you can start the game:).

…and now the minuses (there are not too many of them, and they are rather minor issues, not  a huge problems):

Well, I’m very impressed how the game system works. I already dived into the rules and started to study other factions. Right now, admittedly, I will not have many opportunities to play while I’ll be travelling, but I have plans to paint Malifaux miniatures while I’ll be away (Pandora “No Shelter Here” box plus Doppleganger model are going with me:). I believe excitement will even grow when I start to play with Masters. Lilith just waits to feast on human blood! Hell, yeah!

So, any Malifaux players out there? Australia, Indonesia, Singapore? I’d love to meet and play if possible:).