March 15th. Less than 3 weeks and I’m going back home. I had awesome time in Australia ans South-East Asia, but like all good things, it has to end eventually. So, last two weeks in Thailand and off I go to Warsaw.

Warsaw in March. Grey, rainy, gloomy and cold place. Oh, I’ll have plenty of reasons to complain about:). However…

…in Poland I’ll have so many options to play and shops where I can buy miniatures and painting stuff. After few months of travelling, settled way of life will be a blessing for my hobby.

And first order of the day has already been scheduled:). I’ve applied with my Blood Angels army to Warhammer 40000 narrative campaign organized by my friend Jan in Warsaw. Campaign starts next week but I was able to persuade the boss to count me in and play me turn a little bit later.

This post is first of the series about “Fading Suns of Sector Corinth” campaign. The campaign will last for next few months and envisage at least 6 battles between participants.  On the blog I will be posting the progress of the narration presented from my side point of view – overall situation, my thoughts and tactics and most of all – battle reports.

I also would like to take this opportunity for further motivation to better and faster work on my Blood Angle army.  My idea is that between battles I will paint at least one vehicle, character or squad. So, in very following battle I will have something new painted. Hopefully, I will have all my models in the army painted, before the campaign ends.That would be neat:). So far I painted: one Tactical Squad and one Terminator Squad. Plus Librarian in Terminator Armour and Sanguinary Pries.t So many models left to fulfil the task – more HQ, rhinos, drop pods, squads and heavy support. This campaign will serve me good and I  will pant all I need:). 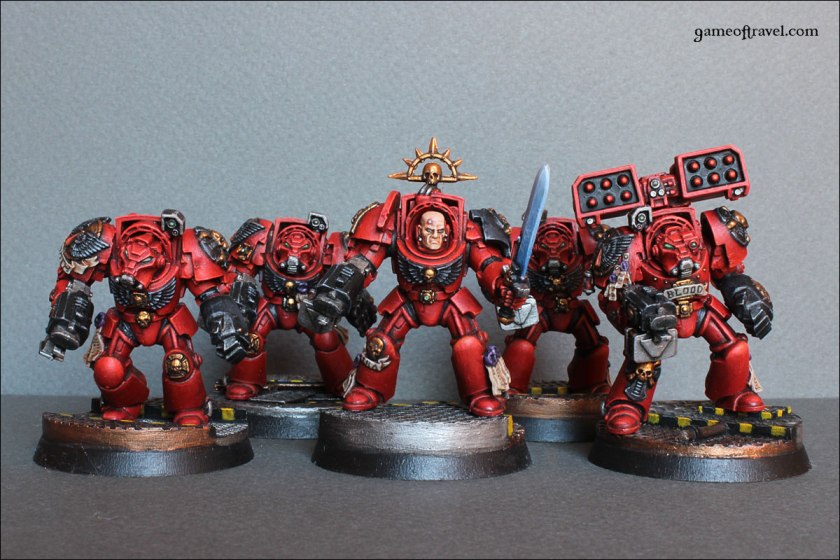 So far we all know just basic ideas of the campaign, but no details about particular battle scenarios were revealed.

Right now this is all we know. That and the list of the armies involved into Corinth sector clash:

As you can see it’s going to be quite a struggle between many Space Marines chapters.How fun:).

Cornith Sector in Segmentoum Obscurus was not especially popular or visited regularly. Sector had not many minerals and fuels depostis or planets worth to colonize. Nobody in whole Galaxy were interested in the sector, until suddenly Corinth stars began to fade one after another. Imperium has sent expeditions of few Adeptus Astartes Chapters to investigate this matter. However each of the expeditions had their own agenda, beside the major task.

Unexpected movement of Space Marines flotillas has caught attention of Greenskins. So many Space Marines in the same sector – that meant perfect opportunity for proper fight.

None of the factions have realised that Necrons were behind the mystery of fading suns. They have started their ancient machinery, which were powered by star core energy. Those younger races will only be interfering their work, so one of The Dynasties were waken up to destroy them.

Captain Sendini in campaign against Hive Fleet Leviathan showed exemplary courage. Courage that  were noticed and credited by Lord Commander Dante. Chapter Master personally appointed Sendini as commander of expedition to resolve the mystery of fading stars of Corinth Sector. Captain of 5th Company felt enormous proud  – there is no bigger prize for Astartes than possibility of test his combat skills in the heat of the battle. Blood Angels once again are going to war. Under the command of one of the most faithful sons of Sanguinius…

I’m not sure yet which model will I use to represent Captain Sendini, but I was thinking of converting this model.

After completely unsuccessful campaign in AS1A Sector near the eastern border of The Imperium, Brother Gamaliel were sad and unfulfilled. He disappointed Lord Commander Dante. He also disappointed The Emperor. Assignment to Captain Sendini’s expedition was quite a surprise to Gamaliel, but he knew that is the chance to redemption. This time he will be more focused on the task and he will not fail. For the glory of The Imperium!

This model will be Brother Gamaliel. Painted him in Bali, November 2015.

Brother Librarian Zaapiel was very close friend of Captain Sendini. Fading stars of Corinth were true riddle to all wise men of The Imperium. Lord Mephiston designated Zaapiel to investigate this matter closely. Will that task not stand between Zaapiel and Cpt. Sendini? And weaken their friendship? After all Captain is quick-tempered and rather straightforward and in case of any threat, he will go for confrontation, and this could be the complication when it comes to meaningful investigation of Corinth Sector. Time will tell.

I painted this model in April 205 in Mexico. He will be Brother Zaapiel.

Veteran of many wars, including infamous campaign against Greenskins in Adelaidus system. For Adeodatus, expedition to Corinth Sector was only one more bloody episode in his long and adventurous life. Many of his Battle Brothers claim that Brother Adeodatus is on the edge of Black Rage, which is the curse of all Blood Angles. Adeodatus seems to accept his fate and wait for the moment, when the fury deep inside him finally will be unleashed.

I’ve bought this model in Kuala Lumpur in Wira Games and Hobby Store. He is just perfect for role of Adeodatus:).

I chose this four characters for the campaign and I intend to apply additional rule for them (which is not obligatory, but I think could add more depth to the game). I plan to roll for Character Recovery table every time one of my characters is ‘killed’ in the battle. I was  thinking about something like that:

1- Severely Injured/Fatal Injury- cannot participate in the next battle.
2- Scarred- -1 Ld for one battle.
3- Wounded- same as above but random characteristic instead.
4- Distracted by Pain- same as Wounded, but two random characteristics.
5- Recovery- no other effects.
6- Revenge- character and his/her unit gain preferred enemy (the unit that killed the character).
Of course this will be my house rule, and I’m going to ask Jan if I can use the table before campaign start.
Ok. That’s going be it for the beginning. Next month I’m going to play my first battle in Corinth Sector against Dark Angels. I plan to write debriefing post – with my Army List and tactics I plan to use. Next in order, progress with the story of the campaign and  extensive battle reports. Starting from March:).