Ok. Time to sum up achievements of last few days. Well, more like weeks – because beside  few finishing touches on Queek Headtaker I haven’t painted in most efficient way. Two weeks and only 3 miniatures painted. Well, it could be better if you ask me, but still better this than nothing, right? 🙂

Today, I’d like to show you 3 models I was working on during past two weeks. Each of these three models is different and was chosen carefully to practice blending techniques with various selection of colours. On the other hand, if I would focus my efforts on one of my personal projects, the progress will be significant. The thing is, it would boring as hell. Diversification is the key. I paint what I would like to paint it particular moment – not what I must paint.

So, three more models painted. Whenever I’m about to write the summary post like that, I feel like I’m little bit closer to completion. As long as I don’t acquire new models, the number unpainted stuff is decreasing. And this is good feeling! Now, I need to resist the urge of buying new ones. Piece of cake (yeah, right…;).

…but let’s skip to my models.

I painted just few Dark Angles in my all life, but whenever I do this, my memories bring me back to my first games of Warhammer 40000 during 2nd edition and ‘Angels of Death’ Codex. Back in the days, this book were divided into two parts – first, about Blood Angels, and second – about Dark Angels.

In the end, I decided to collect Blood Angles, but I was so close to grab Dark Angels part. And now, I have big sentiment for Dark Angles.

I bought this guy in Bangkok, Thailand in December 2015 as some kind of souvenir. Well, I knew from the start, he will not be any use for me. I don’t have any plans to extend any Dark Angles Detachment as allies for my Blood Angles. However, that day in Thailand I felt this deep inside sentimental call of old 2nd edition ‘Angels of Death’ Codex. Suddenly I wanted to buy and eventually paint him. So I did.

And here it is – mixture of Caliban Green, light beige, red and black. Especially black. It  is my nemesis. The colour I constantly struggle. All the time. I wish to master my black to the maximum limits. And I need to hurry up – I want to start Death Company soon, and they just need to be top notch. 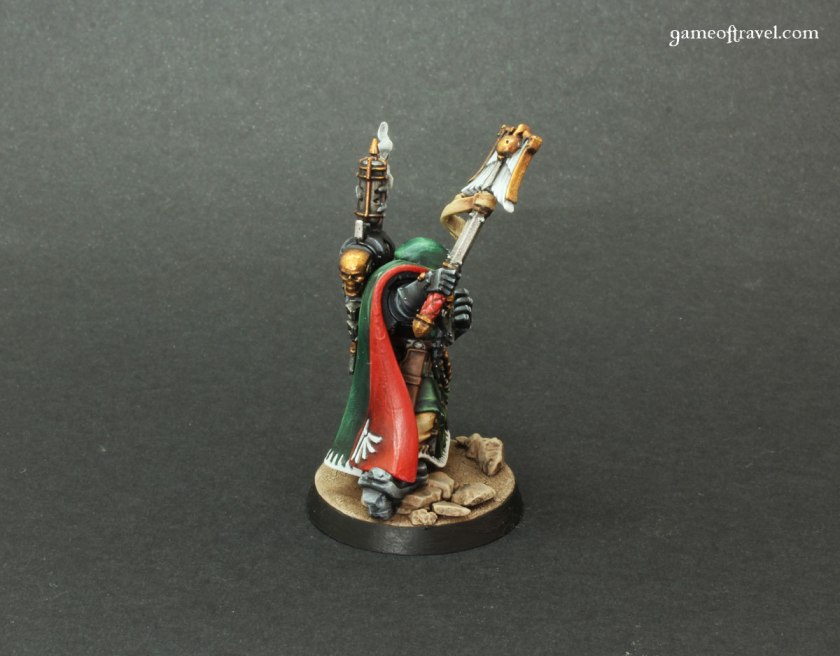 Interrogator Chaplain has black armour, allright. At the first sight, he looks good in it, but the longer I look on this shade I have this feeling – the black is actually too grey… What do you think? Too much? (give me more black to practice!) 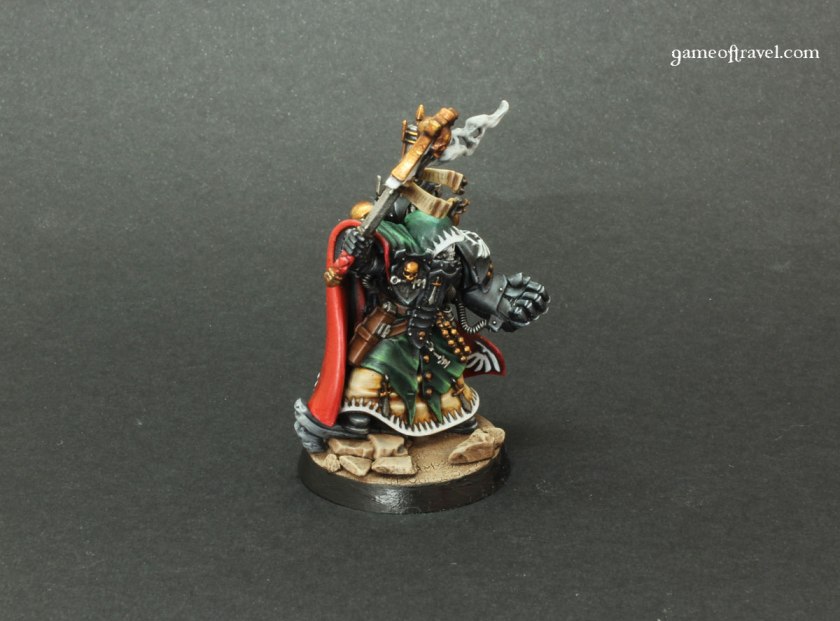 For base I used Agrellan Earth. It gave nice cracked ground effect. Love this every time:).

Now, not very useful miniature (for me) – I had awesome time  while painting it, but now off it goes to my Ebay. It could be yours;). Just click away! 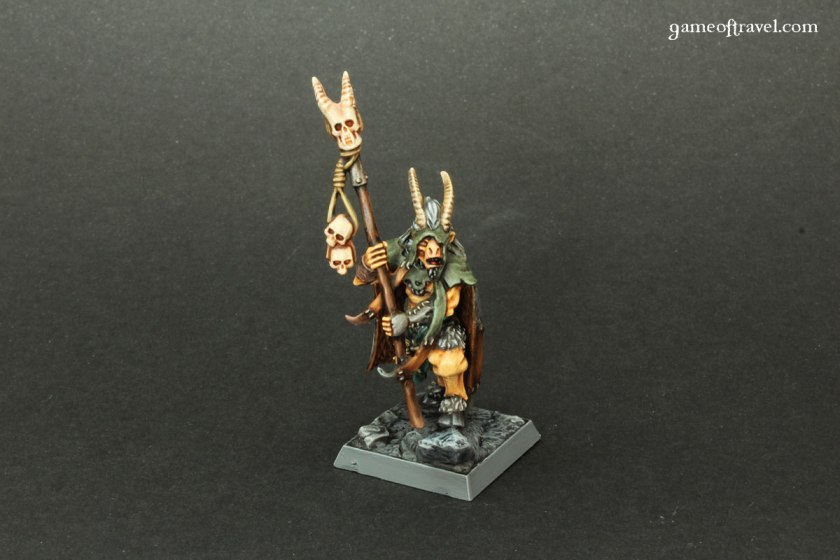 If I think about my wargaming life carefully, I start to get it – currently I’m back to the minis I was collecting, painting and playing at some point in my life. During 5th edition of Warhammer Fantasy, I got quite a nice Chaos Beastmen army. I member to play in few tournaments with them. Not sure if I won any, but it is not a point. The truth is – I really enjoyed all idea behind Beastmen. Wild goat-like creatures living somewhere in deep forests. And there’s nobody to fully control them. Even Chaos Gods. 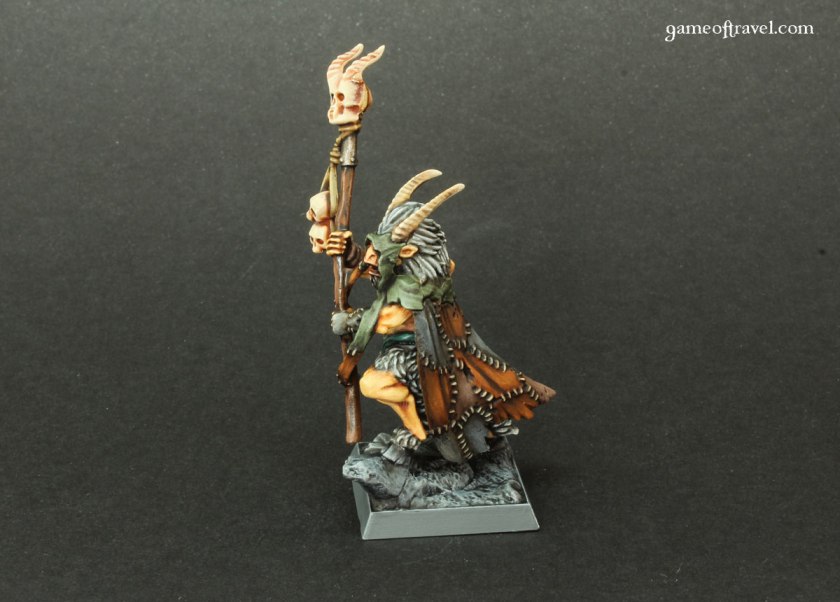 Those old metal Beastmen minis are absolutely flawless. Some of the newer sculpts, like this Bray Shaman, are great reference to those older minis. I really had great time while painting it. Especially the coat was nice piece of cloth to paint. Made from few separate pieces of fabric – different shapes and colours stitched all together. Really cool.

I would love to collect Beastmen army again.However, I need to focus on my Skaven and Chaos Dwarfs I want to start really soon, so I’m forced to say no to Beastmen for now.So, this Bray Shaman also is going to my Ebay store front. Well, if it’s not sold for some time, it could be the sign then – I should start Beastmen project. And shoot, I have already box of Gors somewhere in the attic. So, maybe – Beastmen… gotta think…think hard… some day for sure… 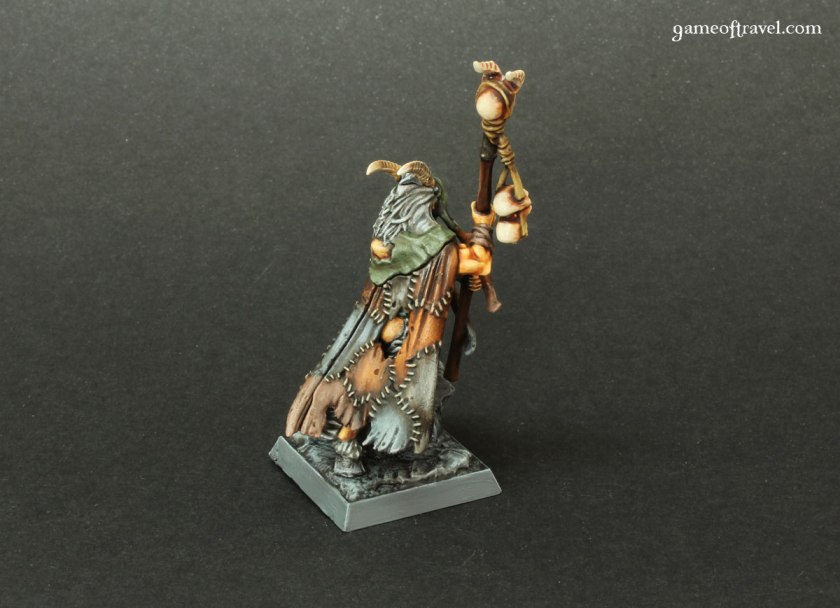 …and finally the last mini I finished during past two weeks…

This is actually silly story. I’m big fan of all Discworld series (obviously) and one time, when I was making order from Micro Art Studio online store, I thought: “…aaa, what a hell, Why not to start Discworld minis collection? It would be fun to grab ALL available minis presenting various characters from the series…”

You probably know it’s impossible. I mean, it is, but some serious deep wallet digging is required to do this and it could be hard to combine with my other expenses. So,it ended on buying three – said Librarian, Death and Rincewind. And then, I came back to my senses. Yeah, it would not happen. These three should be enough. Oh, maybe from time to time I could buy some new one, but not entire collection!

Anyway – The Librarian. Actually is the very first ape mini I’ve ever painted. Oh yeah, that was good! I’m not sure if you aware – I have strong fetish for apes and monkey miniatures. This thing is getting stronger and I can only guess – after Orangutang Librarian, the urge for buying and painting new apes will increase;).

About painting. There were two major problems.

First. How to paint dirty orange fur? The answer was relatively easy. Just mix – Troll Slayer Orange with Skrag Brown in different proportions, from darker to lighter tones. Adding some shades into recesses. And here it is. Proper orange fur:).

Second. Actual skin colour of Orangutang. Referral photos all around Google Images search gave me only one idea – the tone of Orangutnags skin could be so diverse, that there was no point to follow any of the referrals. I chose rather dark grey skin with little bit of bluish touch. And I decided no to worry about it too much. 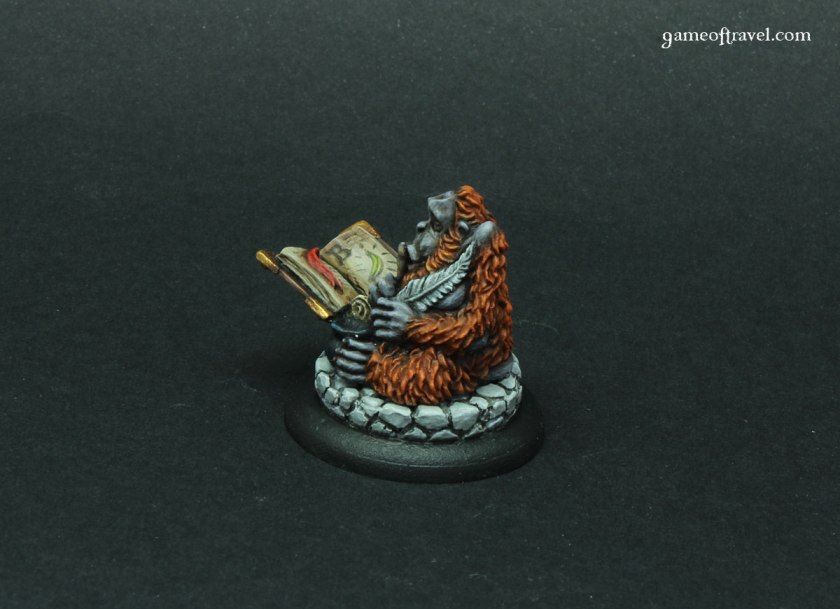 And take a look inside a book! And you will know what kind of book Orangutangs would love to read:).

As I’m pretty sure, I’m not able to complete whole Discworld collection, I send The Libby to my Ebay. Maybe there, he will find new home.

Thanks for catching up. In following posts I will stick to summary of my recent painting work (instead of separate entries for each mini). This works just fine – more miniatures, less words. It works just fine:).