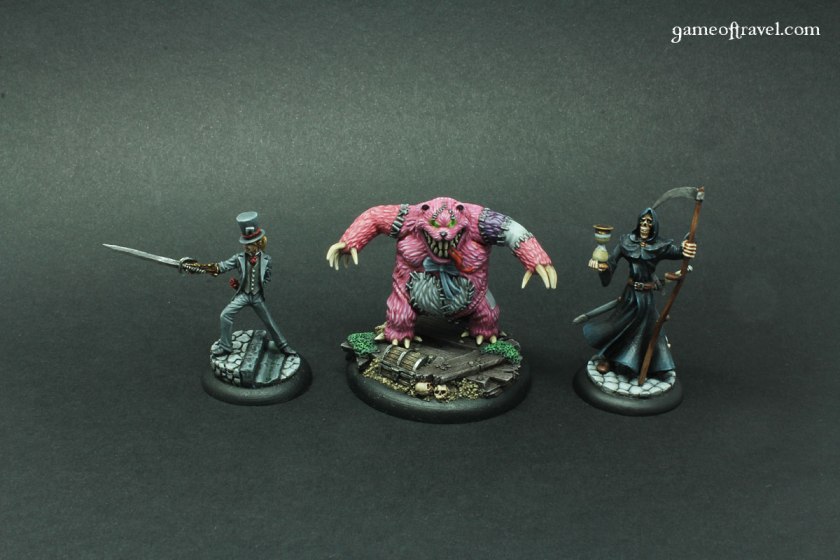 Oh, my… that was really long, unexpected break from painting. Many things stood on the way of efficient work. It’s probably too long and boring list of excuses to quote it here. I can only share one, but actually it’s part of the hobby too, so, let’s just say I’m excused.

My excuse – I was painting a huge model. One of the biggest in my entire life probably. And it took me many hours, and believe me it’s still not finished. I would like to share all the progress and post WIP pictures, but it’s so close to finish line right now, so I decided to keep it until it’s done.

What is it you ask? 🙂 Well, I’m going to keep it in secret for now and share it when it’s ready:).

…and now, finally, after long, long break I got painting fever again. Today I have for you three minis painted during last two weeks. (I hope it’s going to be my permanent state, and fever will not get off). 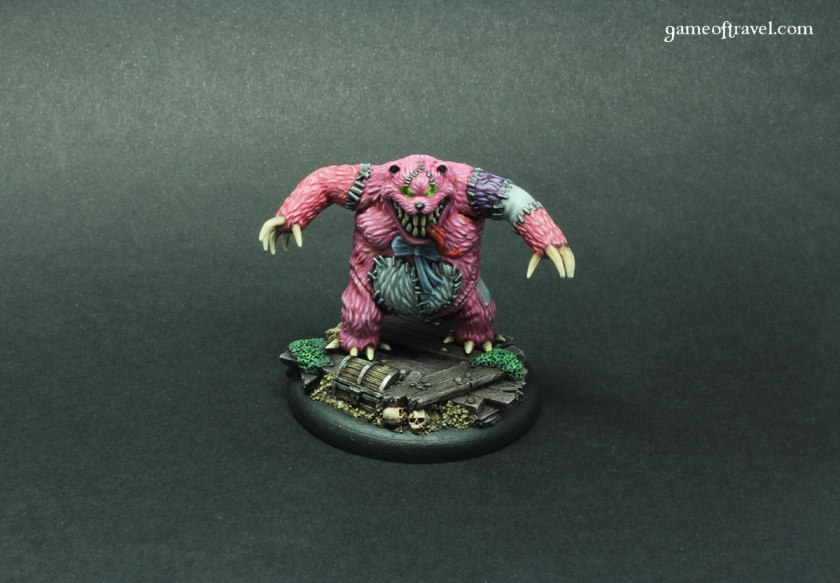 Oh, I was ‘working’ on Teddy for quite some time now. I started Teddy in May – I assembled it, fill the gaps with green stuff, sprayed it black, put it first layers…and then… it went  on the shelf. To be honest, I hate to do this – doing breaks from one miniature, due to some other activities, but as I mentioned, some big fat project suddenly became number one priority, and poor Teddy lost my love. 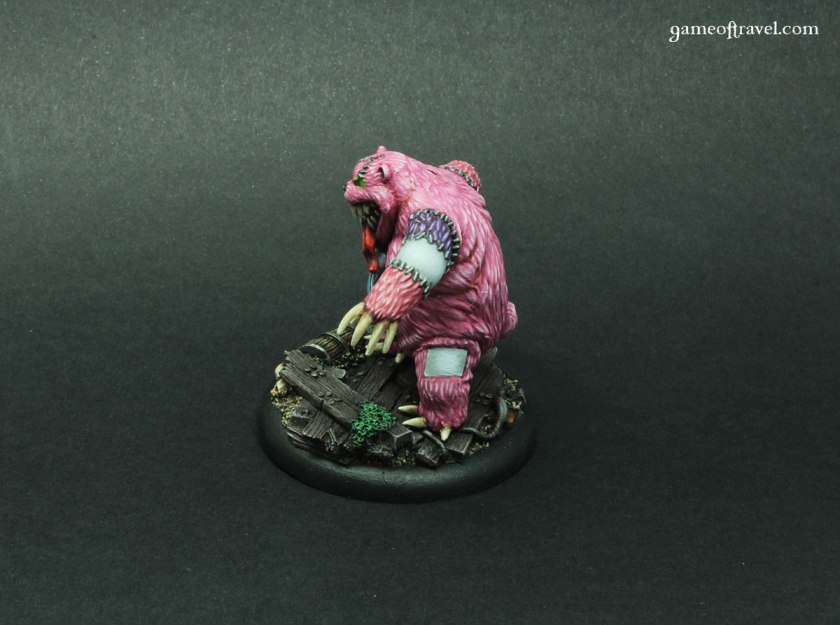 …but now it’s finally finished and its pinkness makes me proud;). Teddy is part of Neverborn faction of Malifaux game. My Neverborn crew under temporary leadership of Lilith (I’m going to play this Master for as long as I have to, to get better with all those little things, combinations and eventually, become Master of Lilith myself:) will get perfect use of Teddy. 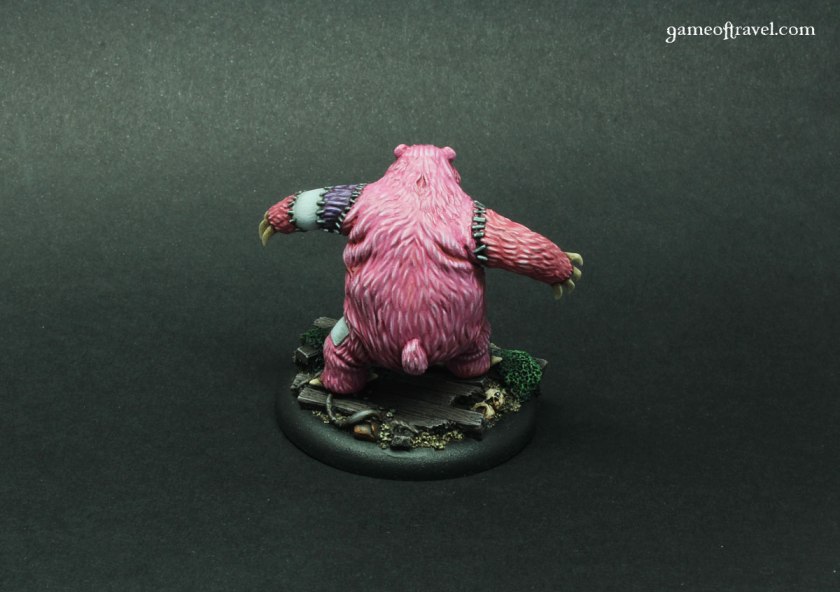 It’s one fat big SOB. The colour I used for the fur may be little bit misleading, but trust me, it is mean beast. Just look at its sharp fangs and claws. The heart on its belly is just a distraction. If it hug, it is a deadly hug, nothing more.

Negative damage flip on any attack on Teddy, regeneration and pretty mighty blow (considering Teddy is still a toy) – all of this makes Teddy a living, killing machine. Perfect for Lilith tactics. Run, hit and kill.

I love the contradiction hidden in this sculpt. I decided then to paint it in such lovely different shades of pink. I got this idea when I was painting little Baby Kade and his little Teddy Bear. I thought then, big teddy should be sweet fellow.It just want to play, but it is misunderstood and due to his size no one likes it… or maybe it’s just prefect predatory camouflage? Folks might think – if it’s pink and fluffy. It’s friendly and kind. And in fact, it’s quite opposite…. 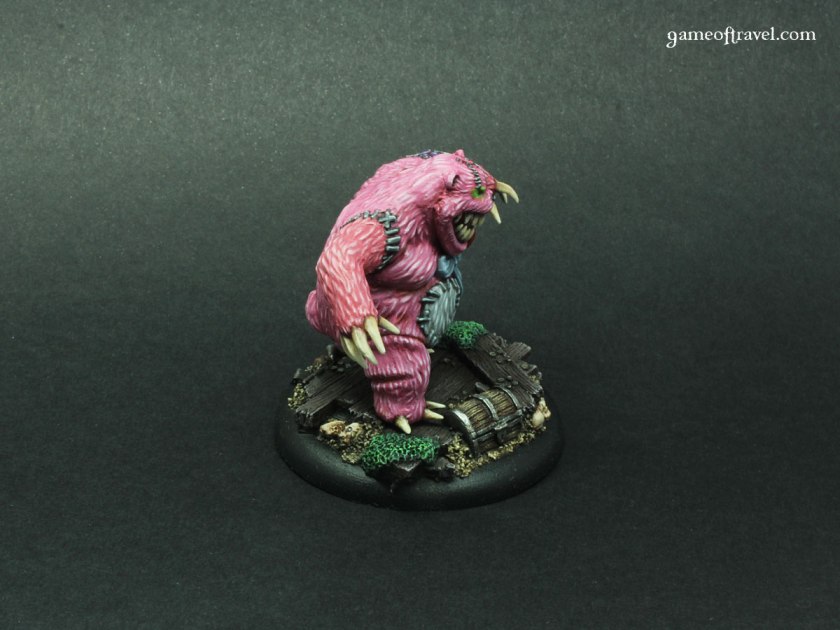 Only by coming closer, you can notice claws, teeth and green glowing eyes, but, then, it is already too late. You are doomed. Teddy got you.

I was working like crazy to prepare Teddy for last weekend Malifaux tournament, but as usual, I failed. Day before tournament, I realised, I have too little time, so I concentrated with basic colours, and decided to skip details and highlights. For tabletop, it was ok, but it was obvious Teddy need to be finished. So ,I sit back for entire Sunday and I did what was have to be done.

Teddy is ready to go!

Model is available at Wyrd, official store or in many independent online retailers like Element Games. The base is from Micro Art. Studio, my favourite manufacturer of resin bases.

Next in line is… 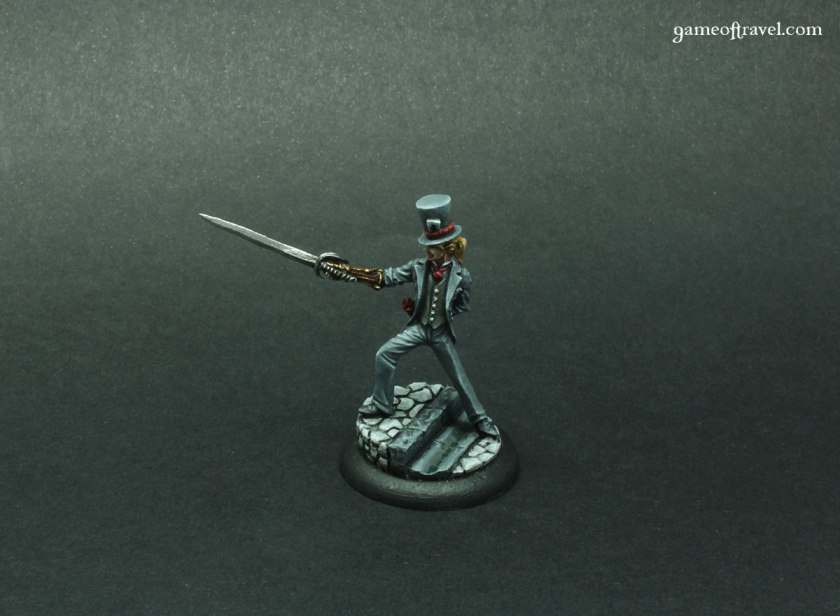 Elven aristocrat from Victorian steampunk game – Wolsung. I was painting him for Wolsung 2ed. Inauguration weekend in Gdynia. Poland (23/24 July) to be nice addition for my Ash & Oak club. I had awesome time in Gdynia. I won 2nd place there in first day tournament (yay!!!) and Sir lance Oakroot made quite an impact during most of the games. Suffice to say – he became one of my favourite heroes in the crew. At the moment I can’t imagine playing Wolsung without him. Report from this event soon. 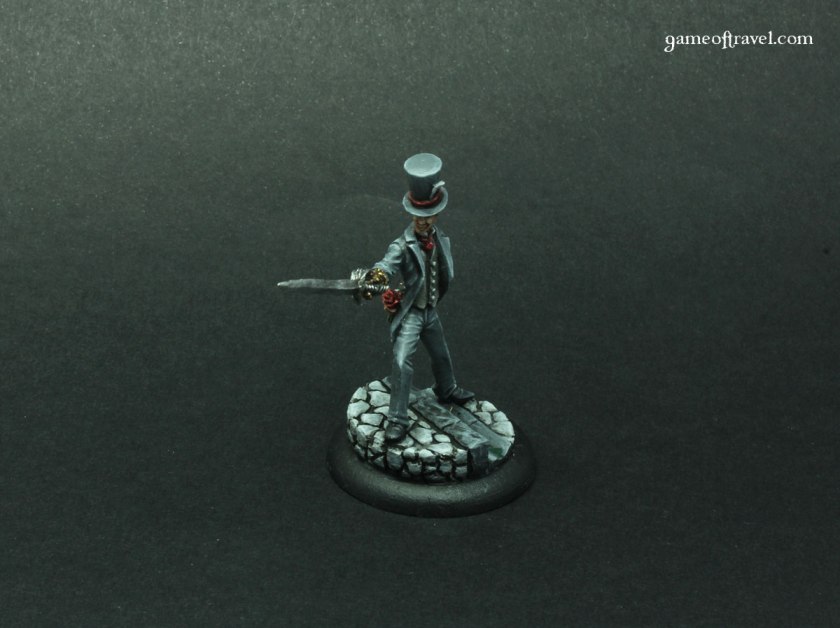 Sir Lance, world famous fencing master. Literally, he can tie in close combat any opponent for the whole game. Killing in close combat – this is the other story… Well, with his low strength, it’s hard to wound well armoured enemies, but with some help of Ogres he can deal with everyone in the game.

About painting job. I simply followed official referral picture in Wolsung game rulebook. Blond hair, grey suit and hat, white shirt, plus some few small details kept also in grey scheme.  I try to do as much highlights as possible to represent shining suit effect. I was thinking to paint the tonic suit fabric. However, still I have to figure out first how to do it. Never painted tonic before, and for now, it’s a mystery for me. Maybe, next couple of aristocrats of Ash and Oak will wear tonic suits, and I will get the opportunity to practice. 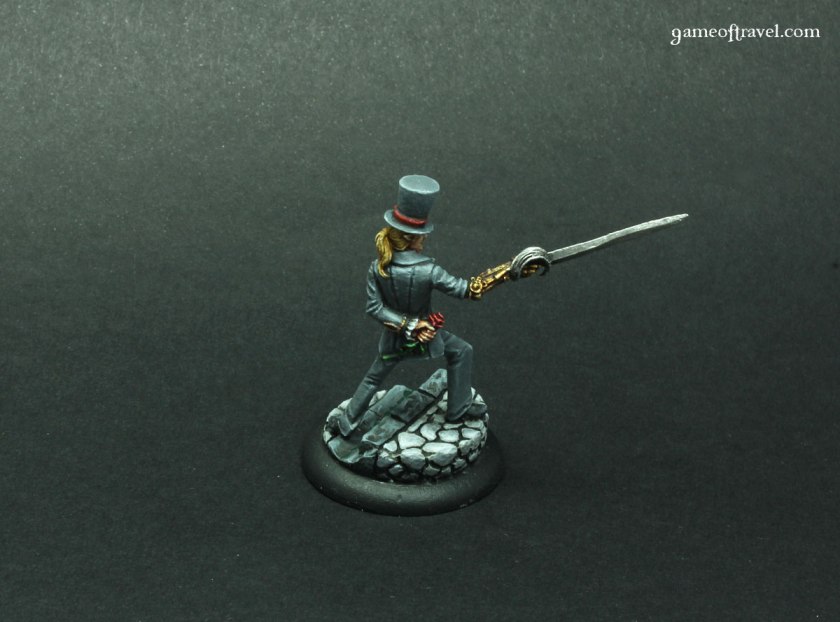 Base – resin cobblestone from Micro Art Studio, which is also the publisher of Wolsung. Cobblestone bases fits perfectly for Wolsung miniatures, and for me it was the first choice.

Many of you, probably, ask a question- what the hell is Wolsung? The game is quite niche and definitely not a big player in miniature games market. But I can assure you – it’s awesome. With clear, simple rules (downable free PDF rulebook from Wolsung website) . 5 factions, plenty of various models to choose and with relatively cheap entry level. I can recommend Wolsung z from the bottom of my heart. You will like it, trust me. And if you have any questions about Wolsung, just shoot! I’ll help you for sure.

And finally, the last (but not least) miniature in Painting Fever… 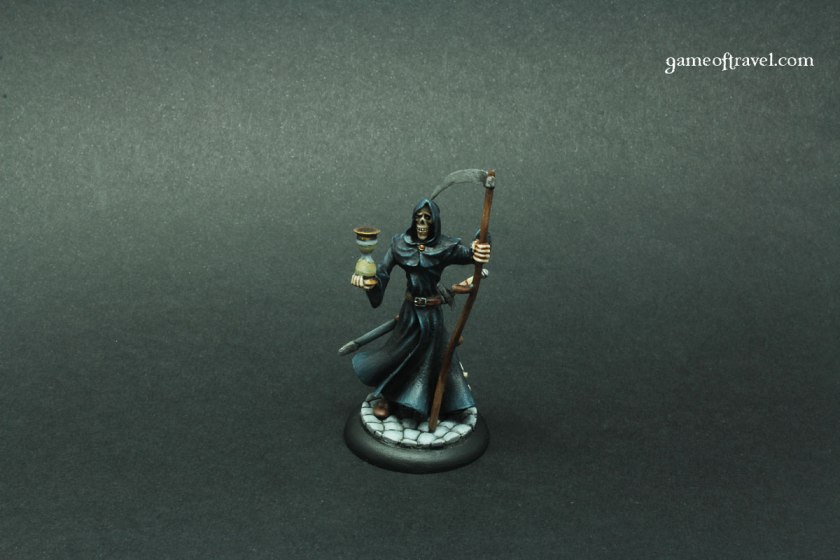 Oh yeah, it is. Death itself. Like living, walking  and waiting for everyone – Death, the skeleton in the robes with the scythe. Stereotypical, right?

No wonder, the miniature is part of Discworld series. And in Terry Pratchett’s Discworld, Death is as stereotypical as can be (at least in its physical appearance). 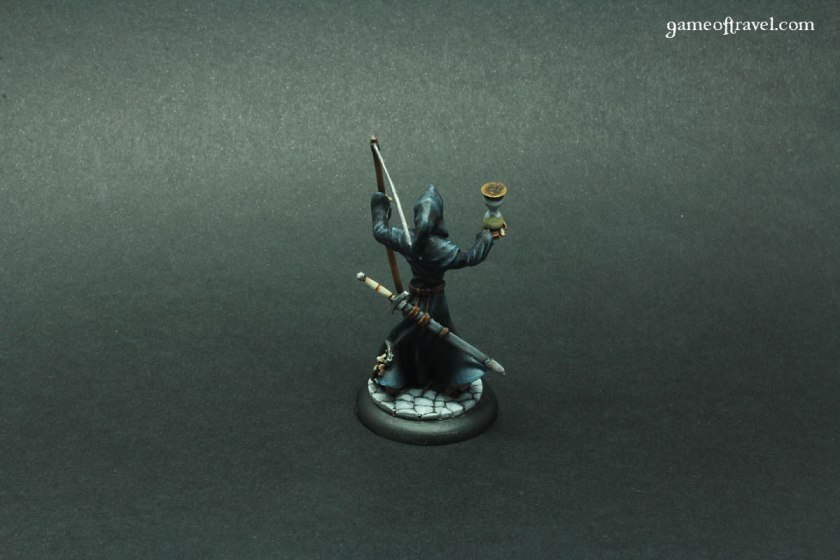 I owe three Discworld miniatures right now. Whole series is something like 60 miniatures, and there are many iconic characters like Havelock Vetinari, Moist von Lipvig or Twoflower. I have Death, Rincewind and The Librarian. All series is the release of Micro Art Studio (once again:).

The Librarian is already painted. You can see his pictures in last Painting Fever post. Rincewind is primed, and waiting for his turn. And Death? Finished yesterday. 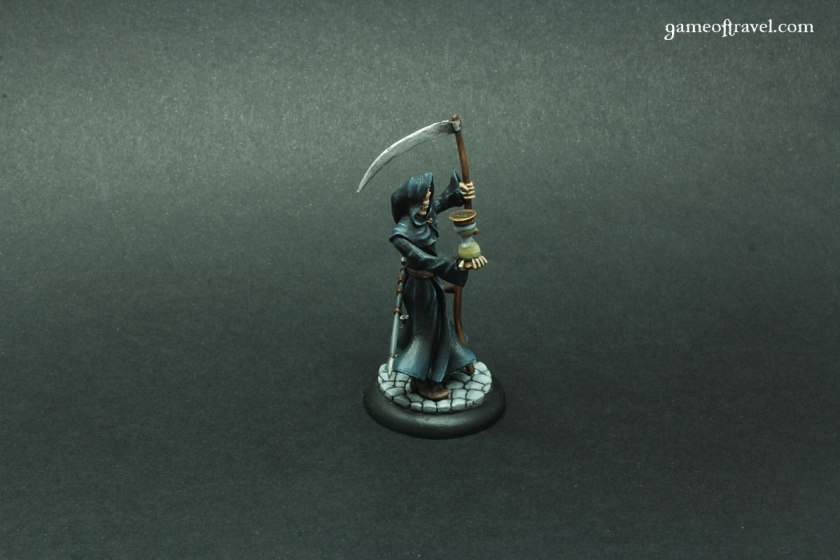 It was quite easy painting job. Robes – dark, almost black with blue shades and highlights. Skull and skeleton hand. Hour glass in one hand, scythe in second…but wait? What’s this in the ruck of the robes? You noticed it right- it’s tiny Death of Rats aka The Grim Squeaker. The best part of the sculpt, if you ask me. 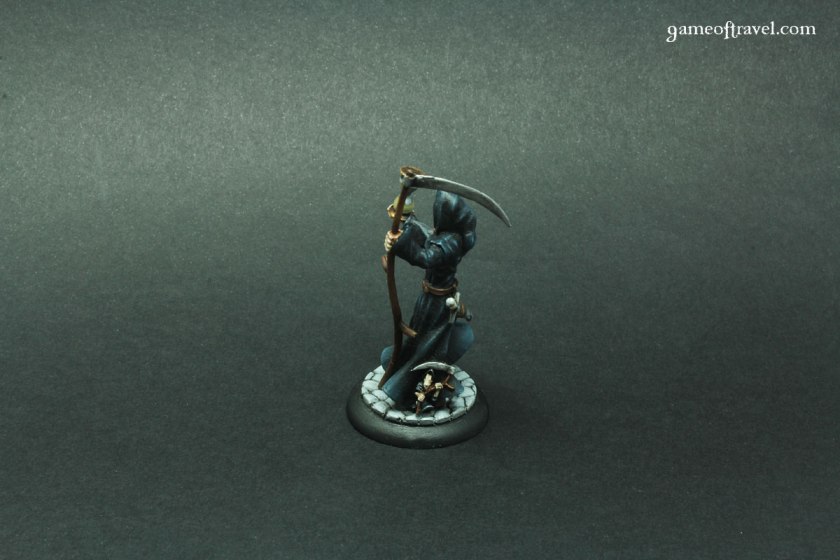 The base – Cobblestone, as always from Micro Art Studio.

Death joins The Librarian on my Ebay page and it will available for sale. It was awesome pleasure to paint it, but I have no further use of this model, so…it goes on the list.

Plans for the future. Finally, I have some more time to work on my miniatures and write new entries on my blog. Fingers crossed for this state will last for long. Unfortunately life thought me, every time I think it’s going to be easier, something pops out and my plans fail. I hope not this time:).

So, if nothing interrupt me – I will finish my big miniature and share it with you (soon!). And go with some new stuff. Maybe Lord Skrolk for my Skaven army? Who knows…

…plus – some few nice battle reports coming this way. Stay tuned! Posts will be published in more regular fashion. I promise you that!