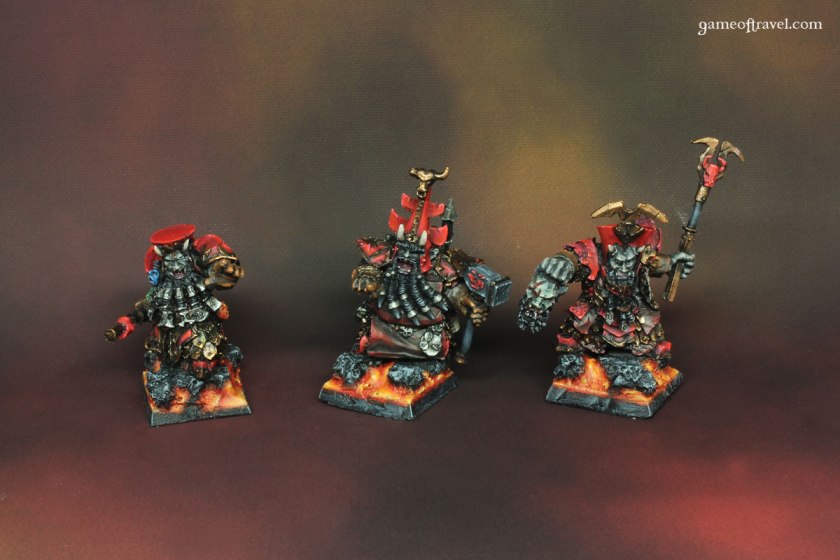 December was really busy for me. First time since 2012 in Europe, and it meant tone of work for me. And in the hobby? Obviously, quite opposite. Barely no time for painting or gaming. The slump. And I hate those.

Despite the obstacles I managed to work a bit. These three Chaos Dwarfs Sorcerers from Forge World are the only result of my December brush struggle. It’s better this than nothing, right? And that was close… (due to the overwork). 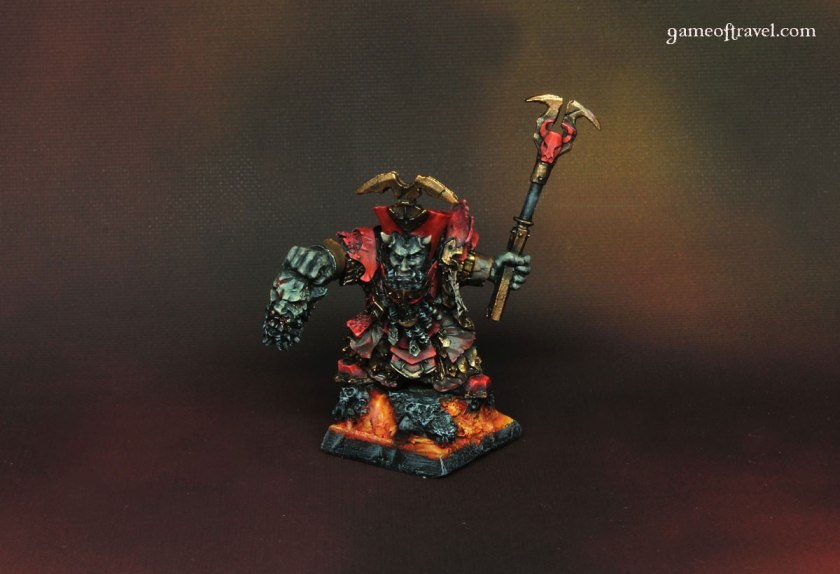 I grabbed those three on one of the internet auctions site as a bulk deal of big batch of Forge World’s Chaos Dwarfs – including ordinary Chaos Dwarfs Warriors (Infernal Guard), Bull Centaurs and Bull Taurus. They were kept closed in the box for over the year, and I decided I should give them some love finally. 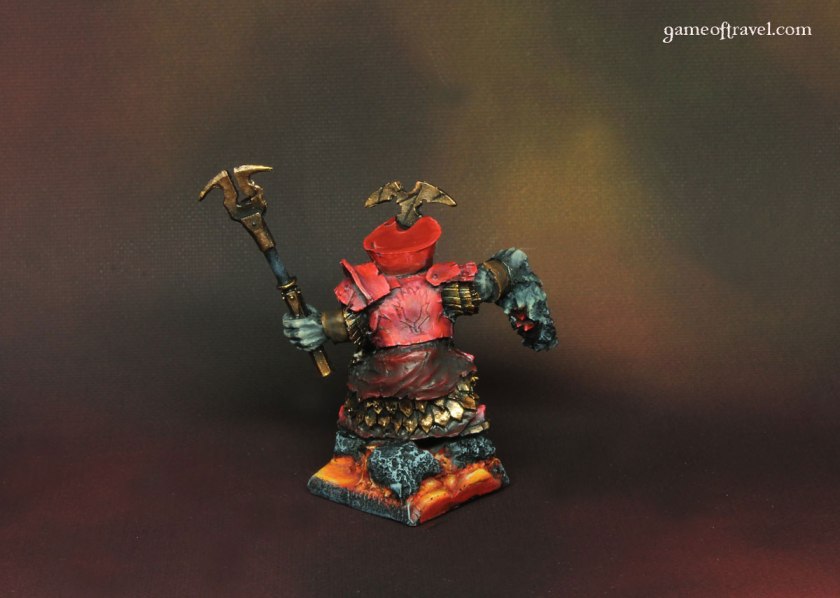 These three Daemonsmiths were kind of training ground for me. I’m determined to gave up on washes. And if it’s not absolutely necessary, do not use them. Paint only. While I was painting those guys, I used few several trick I tried to implement to my works for recent weeks. I used washes only on metallic areas – copper armour and silver/iron elements. 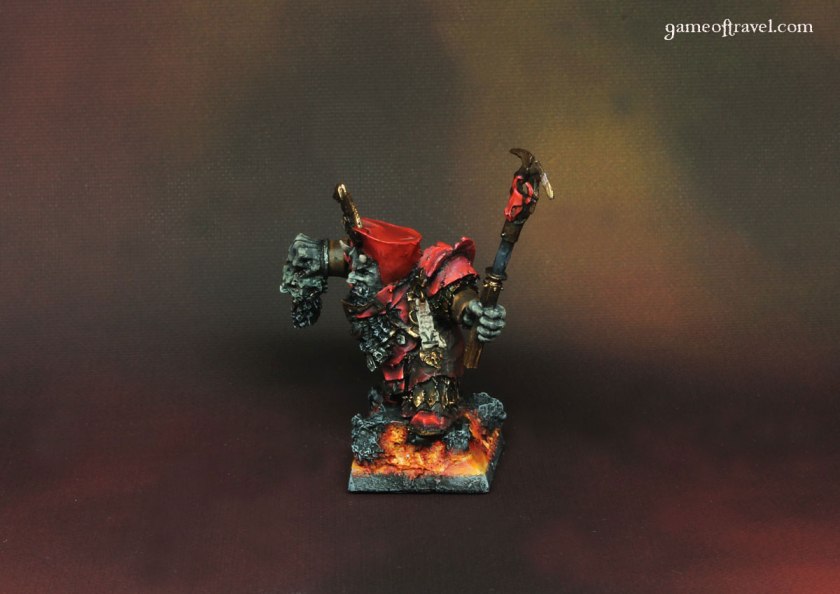 In general, metallics are one of the hardest parts to get it right. Many friends of mine encourage me to try to paint non-metallic metal, and while I find this technique very eye-catching, I hesitate to use it. It’s not that I’m the expert of NMN (cause I’m not). The thing is, I found metallic metals more suitable for my style. Hard to explain with words – I simply feel it more. So, that’s why, I try and try even harder to concentrate and adjust my metallic metal to the top. 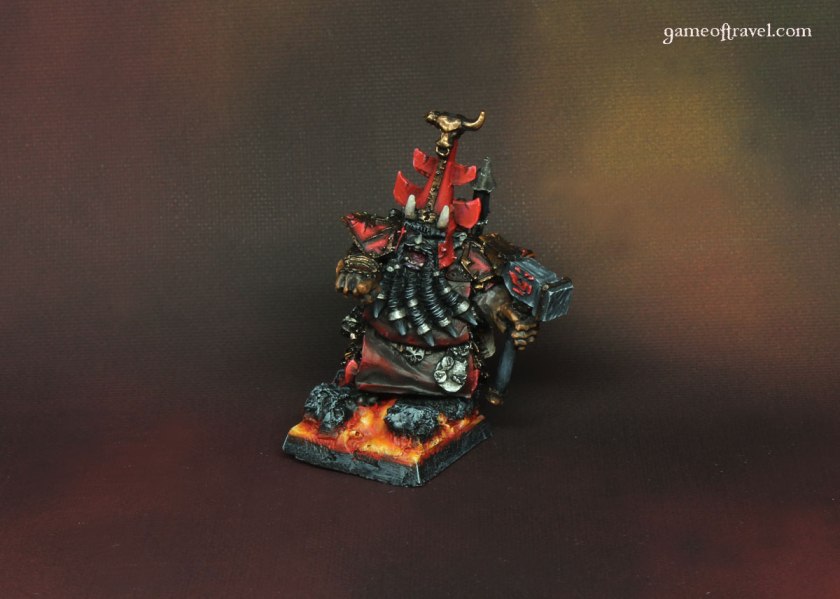 Well, as you can see on these pictures, it’s not going to be easy. I put a little bit too much wash on copper parts, and on the photos they look too shiny. In real life they look quite ok, but honestly, I don’t know, what’s wrong with these pictures. I tried to take them several times, different settings and backgrounds. In every case, the Dwarfs  lost their sharpness. Too many details? Metallic parts absorb too much light? I don’t have even slightest clue… 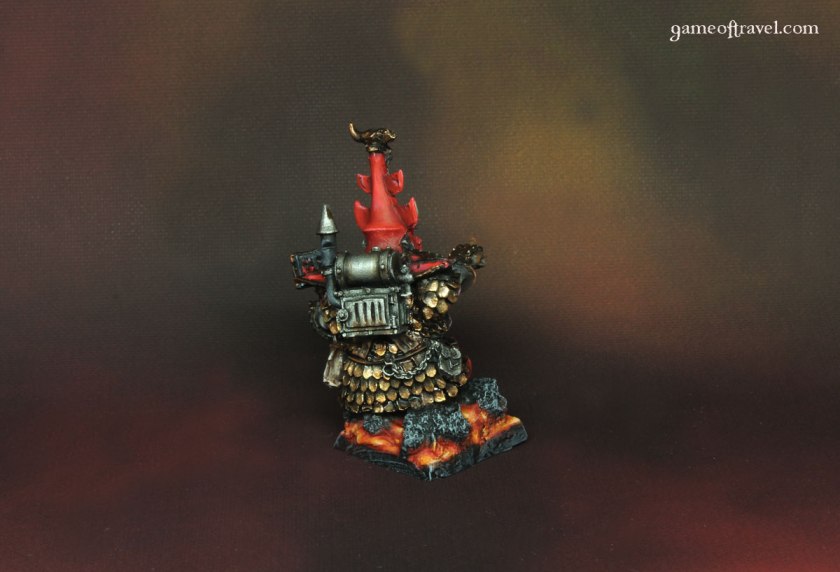 One thing for sure, there’s a long way ahead of me to master the metallics. I won’t get discouraged. No way:) 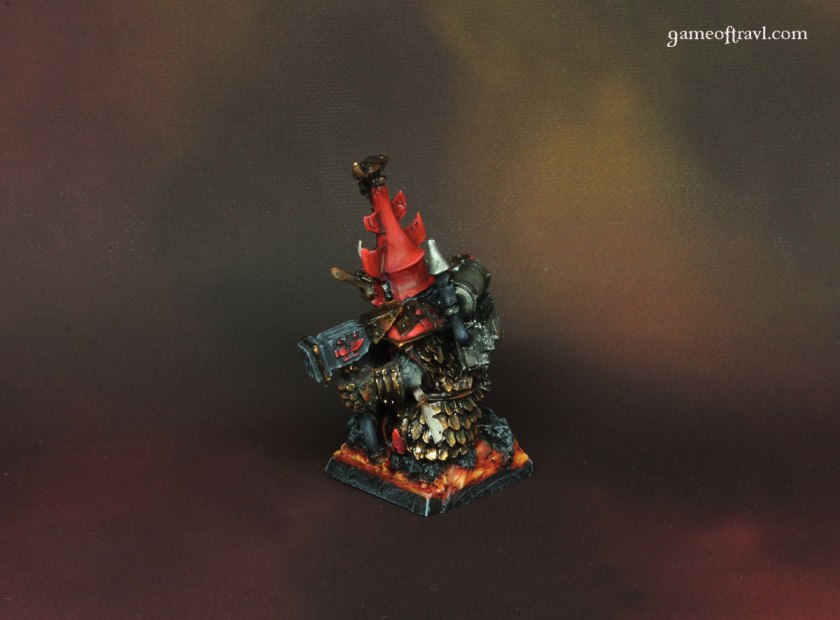 Other issue. For the first time, I tried different approach with red colour. First, I painted, all red to-be armour parts, with white (over the black primer). Several thin layers of white. Lighter on top areas and darker in recesses. Next I gently put Mephiston Red on this. The trick was to red layer will be little transparent. That way, I got highlights and shades wherever I needed. And no need to use washes:) Next step was to paint some highlighted part with little bit of more white, and cover them with Evil Moon Scarlet (also transparent). Then I added Mephiston Red mixed with black to underline recesses and lines of transition. And done! 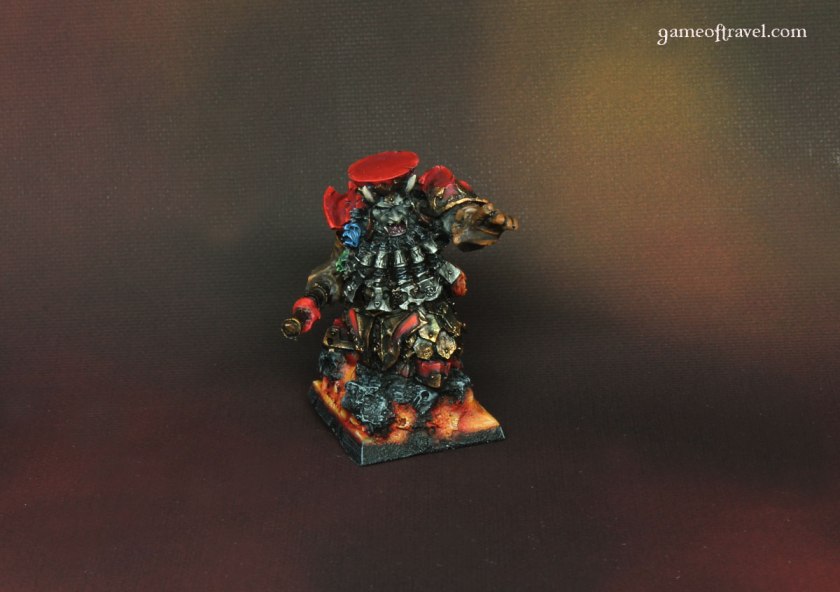 I’m quite happy with the result. The red has pretty carmine shade. It’s strong and vibrant. I will continue with this technique in the future for sure. 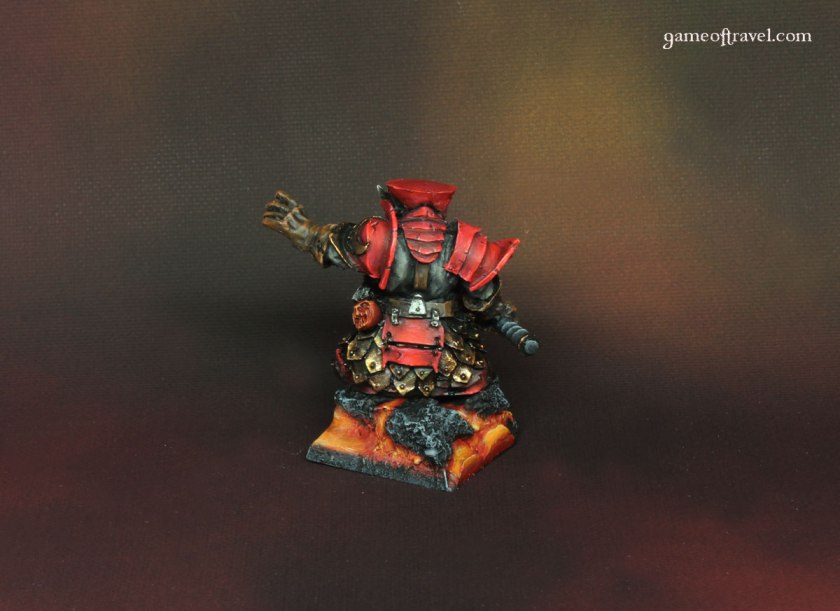 While painting Daemonsmiths was a pure pleasure, cleaning resin miniatures is still a hell for me. Well, I’m old school guy, used to metal miniatures. And the thing with cleaning the metal is, you have to put some strength to it. And resin? Quite opposite. Gentle touch is necessity. Curse me and my clumsy hands. During the cleaning process, I damaged one axe (needed to change it for a wand), a decoration for one of the helmets and few other smaller part. Everything is so fragile in this Forge World’s models. How, on Earth, I can do it right? Simple answer – precision and patience… Better learn it quick, cause more FW stuff is waiting for me, and I don’t wish to damage them any further:). 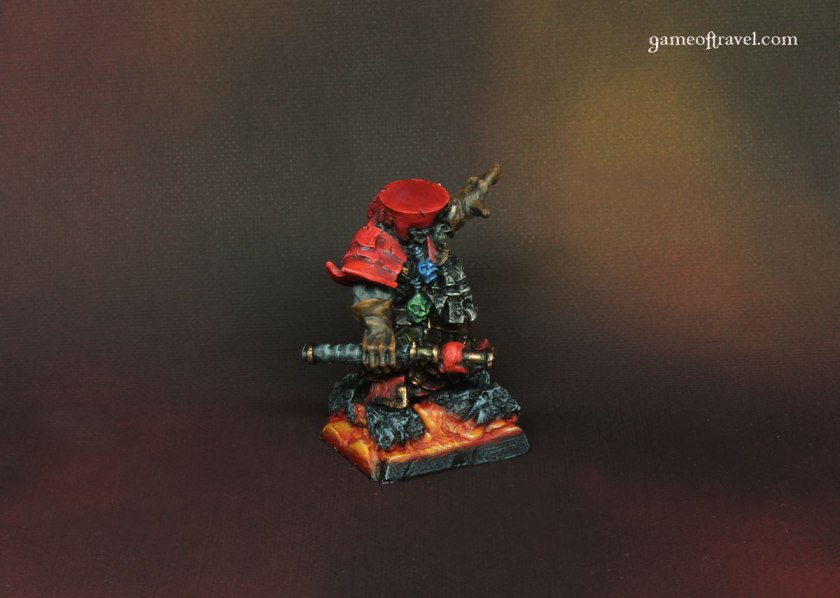 Bases. I used resin bases manufactured by Blitzkrieg Miniatures. Generally, that was my most accurate idea of basing for Chaos Dwarfs. Rocks over the melting, boiling lava. That’s how I imagine The Plains of Zharrduk. And Blitzkrieg’s Lava bases represent that just fine. And what’s more important for me the offer is wide – 20mm x 20mm bases, lager (for new Bull Centaurs) and old type cavalry bases (for old 4/5th edition Bull Centaurs). I can base whole army that way:). Someday, hopefully.

In the future, I plan to build Chaos Dwarfs army for Warhammer Fantasy Battle. It’s nothing specific for the moment, cause there are few current projects I’m determined to fulfil this year (1990s The Empire has the priority). But later – Chaos Dwarfs will be done! Despite I plan to concentrate on Big Hat Babylon Dwarfs, I think few Forge World models will find their place here as well.

For now, I put The Daemonsmiths for sale in my Ebay shop. If somebody will like buy them – perfect. If not, they will wait until my Chaos Dwarf Army going to start. Win-win situation. Can’t go wrong with that:)

Anyway, check them out in my Ebay store.

Plans for the future. While I was writing this, the next batch of miniatures is finished and ready to show. Warhammer 40k Bloos Angels Tactical Squad will be presented here soon. Plus next battle report is coming this way (should be by posted by the end of the week). And next The Empire! Long live Karl Franz!