Recent months were crazy busy for me. No matter what though – there was always free time to sit down by my desk and paint a model or two.

Here’s the summary of my works from last three months.

O.M.G. This fat rat is probably one of the most awesome miniatures ever released. The wickedness of this model is epic. And I’m telling you this as a big time Skaven fan. No objectivity here -just pure blind affection!

Glart is fat. Glart is too fat, in fact. How’s he playing Blood Bowl is a mystery for me. He definitely has the strength, but very little speed and stamina;).

The model itself represents, in my opinion, how the higher class of Skaven society could look like. I can see  fat Grey Seer or Warlock Engineer of Clan Skryre. Eating warpstone all day – everyrat would gain a few kilos on a diet like that, right? Too bad GW hasn’t released anything like that. Thankfully there’s Glart. 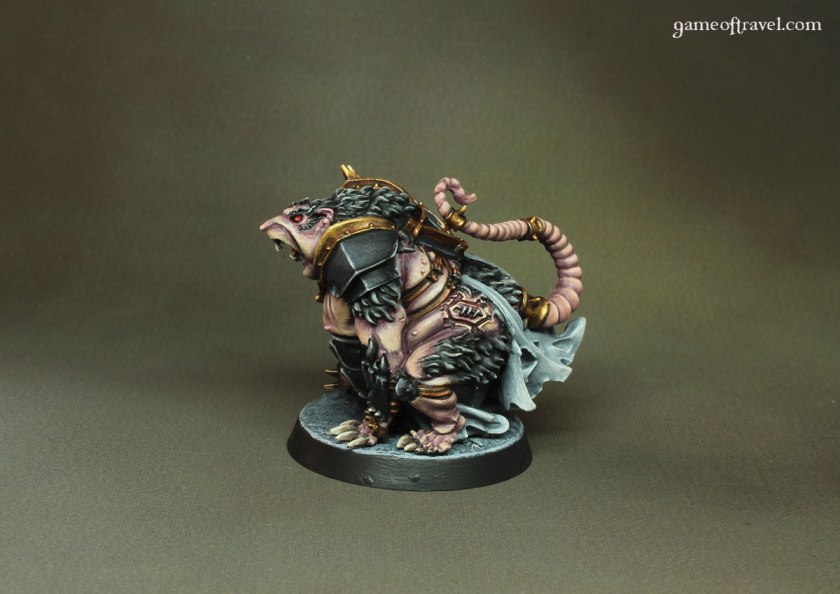 I got him during the visit in Warhammer World in July 2017, and I knew this will be my very first model to paint as soon as I get back home. And I wasn’t mistaken, I stopped everything I was into and paint this fatty in no time.

Another great Forge World model. I bought him when I was at Warhammer Fest in Coventry, May 2017. At first, I was thinking about him as a part of my still non-existent Emperor’s Children force.

However, my mind works so quickly these days, hobbywise. In my head, ideas pop up and fade with the speed of light. One day, I think – oh, my… Emperor’s Children are awesome, like all Horus Heresy. I need the miniatures so badly. I can’t live without them…

…and then, a few weeks/months later, just after I’ve bought Betrayal at Calth box plus dozens of upgrades and other minis from Forge World, I got a moment of clarity… 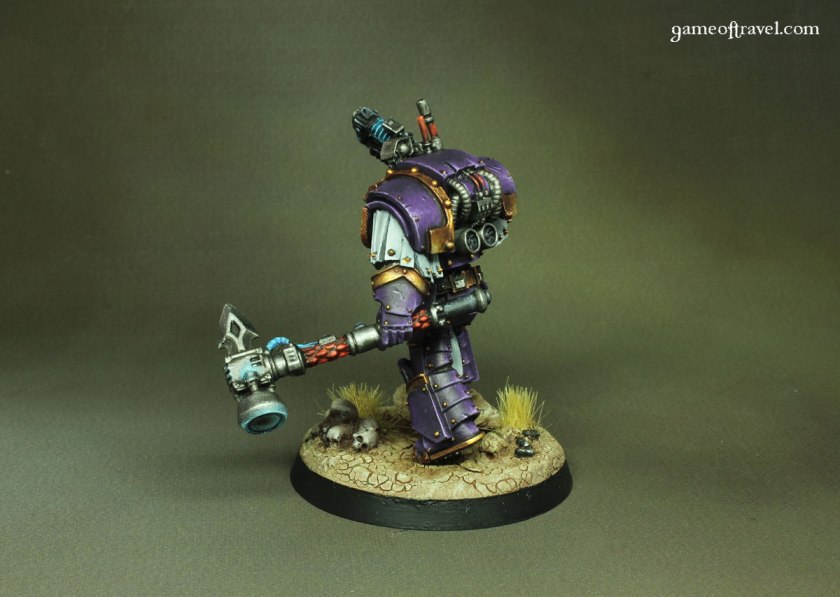 So, The Praetor went on Ebay, along with Fulgrim (their battle brothers will join them later, as soon as I’ll find the time to paint them), and my dreams of thousands of projects was gone with the wind…

The base is combination of green stuff and Agrellan Earth with some rocks, skulls and tuffs. There’s no resin base here this time.

Emperor’s Children Praetor is available on my Ebay page.

Another epic model. I just love it. I love everything in it. No flaws. When I finally will decide to start my Beastmen army, Malagor, The Shaman will be there in honourable place. As one of the Beastmen sculpts ever.

This model isn’t mine. It’s the part of small commission, not a personal poject… I’m still very far away from giving my Beastmen a green light.

…but I owe my own Malagor model. Hidden somewhere in the box. It’s even primed… One day, sooner or later…Malagor will rise among the ranks of my followers of Chaos Gods.

Another commission. Great Empire metal miniature. From early 2000s, I suppose. Warhammer Fantasy 6th edition. Not my favourite era, when it comes to to model sculpts, but from time to time you get such an amazing pearls like this Griffon Battle Standard Bearer. 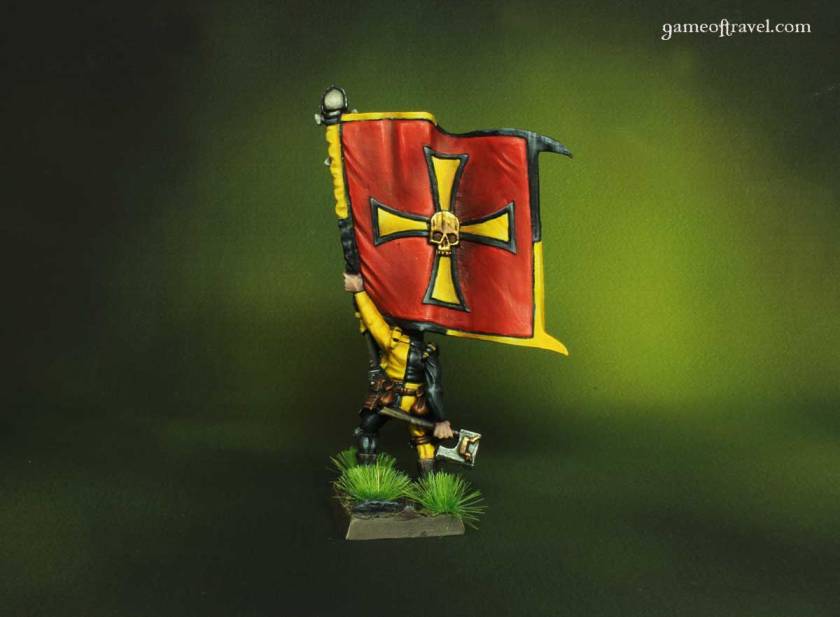 I was asked to paint him in Averland province colours. Yellow, black with red add-ons.

I decided to paint uniform in main yellow/black combination, and choose red as primary colour of the banner (with yellow/black borders and golden griffon). This way, the model is not in duo colours. Red plus gold adds a little bit more depth to it. 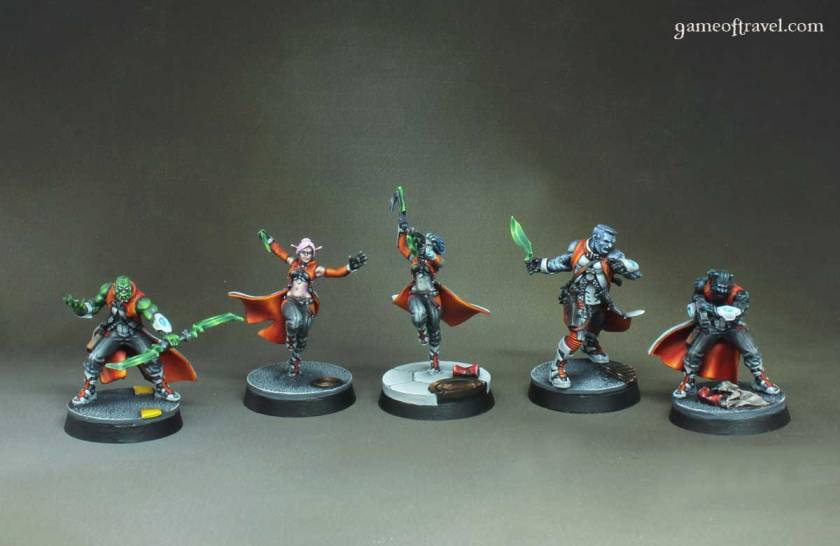 …and the last bunch from this batch of models. Morlocks are crazy models. One of the last miniatures from my Infinity Nomads collection. I was about to play the game. Well, I even painted enough miniatures to field 200 points. Bah! I even played two times. Then, got me the same reality check like with The Horus Heresy… I got into too many game systems. 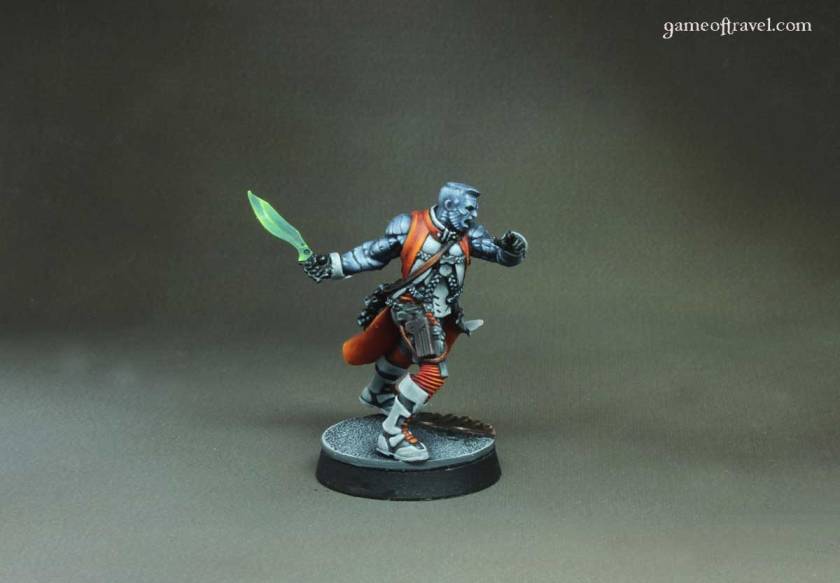 So, I have this band of Nomads I plan to paint and sell. Miniatures that are true pleasure to paint. Great diversion from my typical Games Workshop painting jobs.

Most of these guys are gone already. Only two of them are still for sale on my Ebay page.

I’m usually so late with updating the blog with my recent works. Always busy, always occupied with painting. The blog is out there. I know…

…but when work deadlines are close, regular blog updates become less important. Therefore that’s why I’m always late with showing my works here. However I’m always up to date with my social media – Instagram, Twitter and Tumblr. If you are curious what’s going on at my workstation, and you want to stay in touch, please join me at some of these sites. Thank you!