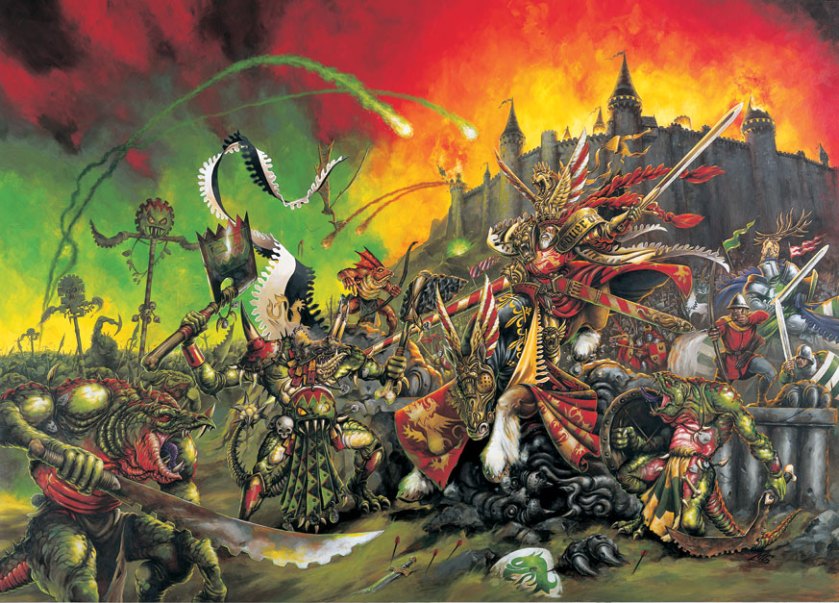 Another radio silence on my blog. However, I have a pretty good reason for that.

Last year I got involved all of the sudden into a organisation of Polish Oldhammer Weekend. And this year, once again I went for it. With a group of friends we are doing it.

And I tell you, it involved a substantial amount of work and creativity. Not so much time left for painting (definitely slower tempo in this area) and for regular blogging. But, man! I wrote so much content for this in recent weeks, that my brain hurts.

And there’s a lot to be prepared.

First of all, the whole weekend will be constructed as big narrative campaign with lots of battles, plots and twists where all players will be involved. First day will be a set of battles where the players will gaining bonuses for the day two. And day two, little bit easier on the rules and restrictions, but bringing a ton of joy. Day two will be a grand finale – all players on one table playing epic siege scenario.

We decided to arrange all the games during the weekend, entrapping a gaming freedom a bit, all in order to keep the high level of gaming and hobby standard. Unfortunately, in Poland the habit of playing the games with not finished armies is strong, and we were forced to remind to all the players wanted to play during the weekend – nice looking armies are a must. Not even one unpainted model will be tolerated. Sound harsh, but it’s necessary to achieve top quality.

Ok, but let’s cut to the chase.

Each of the player will be playing at least 4 battles. 3 during first day, and as a big conclusion – grand siege battle, during the second day.

We are all meeting at Adeptus Mechanius Club in Warsaw, where we will be able to use their wide selection of scenery pieces. Big thanks for guys from AdMech for their hospitality.

The whole campaign is kind of a sequel of last year struggle after The Old Hammer, the ancient artefact of incredible power. The wielder of The Hammer will be able to stop the incoming of End of times and the world as we all know.

For the Day One, I prepared 9 scenarios, all connected in one major plot. Getting to Dark Lands where The Old Hammer is held in mysterious keep.

And to be honest, I’m not good in writing scenarios. The story, ok, no problem with that. But to get the game interesting and balanced in the same time? Well, that’s a way over my writing skills…

So, I was forced to cheat a bit…

Only one scenario is the original idea. Andrew, one of Weekender ‘man-behind-the-scenes’ wrote it.

The rest, 8 of 9 scenarios will be based on articles from White Dwarfs and 5th edition campaign supplements battles. Sometimes they are loosely connected. And sometimes they are almost 100% the same as the original.

I’d love to give you all the details to these scenarios. Background stories, special rules, maps etc. And to be blunt, all is ready – but unfortunately for most of the readers, all is written in my native language – Polish.

For those who understand this barbaric tongue, here’s the link to all Oldhammer PL information you can get.

We gathered 16 gamers. We have space for 22 people. And there were many oldtimers, willing to get this nice history lesson, but like I mentioned on the requirement of fully painted army for some may be discouraging, plus we are not teenagers any more. Work and families often collide with the hobby.

So, a few got out. The other few got in, then the list changed again, and again, and after that AGAIN. Now, the final 16 left, from all around the country. Many different armies. Take a look at the list:

1. Dogs of War
2. Dwarfs x4
3. The Empire x2
4. Skaven
5. Chaos Warriors x 2
6. High Elves
7. Vampire Counts
8. Chaos Daemons
9. Lizardmen
10. Bretonnia
11. Dark Elves
All roosters were created based on 4th and 5th edition Army Books. The best ever released:). To get the rules a little bit less ‘herohammerish’, we decided to use Battle Book rules for tournaments.

Armies are 2000 points. With these limitations, there shouldn’t be too many concerns about overpowered characters wiping the units in go. The game should  be more balanced (if we can there’s such thing as balance in Warhammer. LOL:)

And one more thing. This campaign has massive story around it. Almost every gamer wrote the background story for his armies.

Just follow this link to read those stories /once again. It’s in Polish. sorry for that/.

Beside that, each player received from me a short outlet with all the story of how his army get into the Darklands, describing the adventures that led him to The Old Hammer.

I put a bit some effort to make this weekend right. To all work perfectly. We’ll see. Soon.

And one more thing. I’m aware WHFB 5th edition is not exactly Oldhammer (according to the definition), but this is Poland. Back in the days, when wargaming scene was born- it was mid 1990s, and there was the time of 4th edition. So, most of the old timers in Poland didn’t even lick the scrap of the true Oldhammer. And right now, if we would like to organise the event with anything older than 4th edition, there will just handful of people,

And, why 5th edition instead 4th? Let’s face it – it’s more or less the same (with changed magic and just a few rules) and 5th provides us more army books and the better rules explanation.

So, please forgive me this ‘heresy’ against Oldhammer, and let’s not do this dispute what is old or middle or new again. Leave it be. Let’s just have fun with wargames:).